In this post we discuss a circuit concept for enabling cars with an add-on automatic safety park light which triggers during night and signals the position of the car and consequently prevents a mistaken collision or dashing by another vehicle. The design ensures minimum consumption and relatively higher brightness for the involved LED lights. The idea was requested by Mr. Ankit.

Kindly advise on the following circuit

1. A 12V circuit is desired to be designed to light a 12V LED, such that it lights the LED in pulses (that is to say that the current to led is sent intermittently (say once every 1 minute roughly) and the current pulse stays for a brief duration (say 5 seconds roughly))

2. So, the LED lights repeatedly once every 1 min and stays on for roughly 5 sec each time.

3. It is also desirable that the above circuit starts working automatically when it is dark and stops when the atmosphere is lighted.

4. The above circuit is intended to be used in a parked car so that the LED keeps blinking in the rear when car is parked in dark and the cycle stops when it is day time.

The significance of the proposed darkness triggered car safety park light is as follows... Mostly at night the cars are parked by the roadsides due to shortage of space inside homes.

Often it is very dark due to absence of street lights or lack of electricity supply. So sometimes pedestrians, cycles or rikshaws or few vehicles without headlight bump into the cars.

An intermittently pulsing LED as requested above would mark the presence of car, at the same time without undue battery drainage. 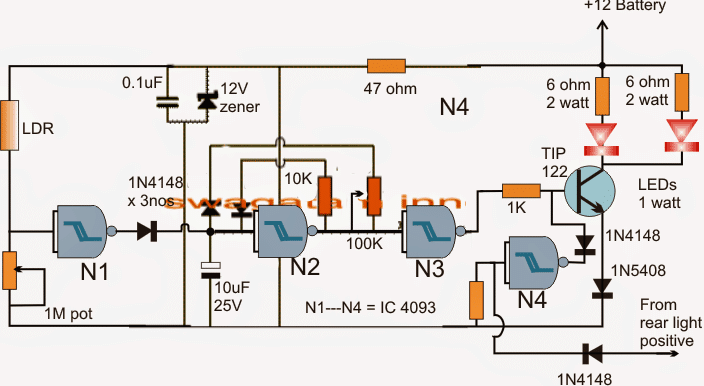 The requested darkness triggered car park light circuit can be made as per the above shown circuit details.

The entire circuit is build around a single IC 4093, the gates N1 to N4 are from this IC which are appropriately configured with the associated passive components.

N1 is wired as darkness sensor through the connected LDR across its input and ground. The pot determines the sensitivity control can be set for triggering N1 at the desired darkness level.

N2 is wired as a PWM control frequency generator stage, the associated pot can be used for setting the required degree of ON or OFF time to the LEDs and consequently control their average brightness and consumption.

N3 is used like a buffer, whose output is connected with the base of the driver transistor TIP122 which responds to the fed PWMs and drives the LEDs with the corresponding amount of brightness.

The gate N4 is positioned to stop the TIP122 conduction and the LED illumination whenever the tail lights are detected ON, meaning while the taillight bulbs are ON, the proposed darkness triggered park lights are shut off.

With N2 output is low, N3 output is accordingly prompted to go high, which in turn switches ON the TIP122 transistor and the LEds. This positioned is held in the LED switched ON position (and flashing) until the darkness persists and dawn sets in, or/and the tail lights are switched  ON.