LED lighting products are relatively new for the commercial market and as with any new product, they have to deal with doubt and negative comments from consumers’ side. There just is a lot of false information about LED lights that creates many misconceptions about them. So here are the greatest myths about LED lamps and also some facts that show how untrue these myths are.

It’s often speculated that LED bulbs last forever, and, if they are used correctly, you will never have to change them. But that is not quite true. Although LED bulbs really don’t burn out as quickly as fluorescent lamps or flood lights, they still degrade and dim over time. Usually, the diodes will become dimmer and less bright when they near the end of their lifespan. However, since the average life of a LED bulbs is about 50,000 hours of burn time, this will be a very slow process and you will still be able to use your LEDs a lot longer than other types of bulbs. And if you want to prolong the lifespan of LED bulb even further, avoid overheating them and use only appropriate light fixtures and dimmers with your LEDs, and you should be able to get away with using a single LED bulb for about two decades. 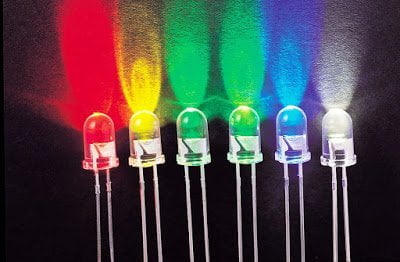 LEDs have low carbon footprint, because they are energy efficient

Many people think that LED lighting has very low or no carbon footprint at all. Actually if we compare the carbon footprint of LED bulbs and fluorescent or halogen bulbs, which are the main rivals for LEDs, then LED bulbs really do emit much less carbon dioxide, simply because they produce light by using less electricity. The issue, however, is that smaller electricity consumption and lower energy costs urge people to use more light, so ultimately the amount of CO2 emissions remain about the same. Add to that the fact, that the production of LED lamps haven’t become as efficient as it should be yet, so it also creates carbon dioxide as well as other pollution, and you can say that, although LEDs do have lower carbon footprint, it is nowhere near an eco-friendly level.

Another great misconception is that LED bulbs emit too much blue light. But that is not true. When LED bulbs first showed up on the commercial market, they did emit only blue light, so this is probably where this myth came from. But nowadays, manufacturers have come up with techniques that enable them to convert the blue-light emitting diodes to give out white or yellow-white light. So you can buy LEDs that won’t emit virtually any blue light, however, you can also sill buy cool-white LED bulbs, that will have blue illumination. Just check the color temperature of the bulbs when you are choosing your next LEDs, and you should be able to avoid having bulbs, that give out too much blue light.

All LED bulbs are the same, so I can just buy the cheapest ones

Very common myth about LED lighting is that all the LED bulbs have the same features and quality, so you can just buy the cheapest bulbs and call it a day. The truth is that there are many different LED bulb manufacturers and they are quite different from each other, which means that the quality of their bulbs differ to, therefore consumers always should pay attention to what they are buying. I would recommend to buy LED bulbs only from reputable companies that offer guarantees with their product. These companies invest in research and testing, to ensure highest quality for their products. Which means that you will have the best bulbs that you can have for the money you spend on them.

LED lamps might be efficient, but they are too expensive

Lastly, another myth that discourage many consumers from buying LED bulbs is that they are just way too expensive to be a valid light bulb alternative. It is true that LED bulbs are more expensive than traditional incandescent bulbs or halogen bulbs, but they will pay back in no-time. Mainly because LED bulbs not only lasts for a long time, but consumers will also be able to save a lot of money on electricity using LEDs as well. Switching to LED lights really requires for some investment, but it will be a lot cheaper in a long run.

Many people just assume that rumors, which they have heard somewhere about LED lighting, are true, so they don’t buy LED bulbs and opt for less efficient incandescent, halogen or fluorescent bulbs. But that is the wrong choice, because, even if you do your own research before switching to LEDs full time, you will only find more reasons to convert to LED lights and forget about all other options.