The post explains a simple foot activated staircase light circuit comprising of a chain of LEDs which activate sequentially in response to each climbed step. The idea was requested by Mr. Dwayne.

Many thanks in advance.

1) The first idea allows a chain of LEDs installed across the length of the entire staircase to be lit sequentially, one after the other in response to each step climbed by the visitor.

2) The second concept allows all the LEDs to light up together when the visitors steps on the first stair, and the light is shut off as soon as the visitor has crossed the last uppermost

The first concept can be implemented by installing the following circuit across each of the stair steps: 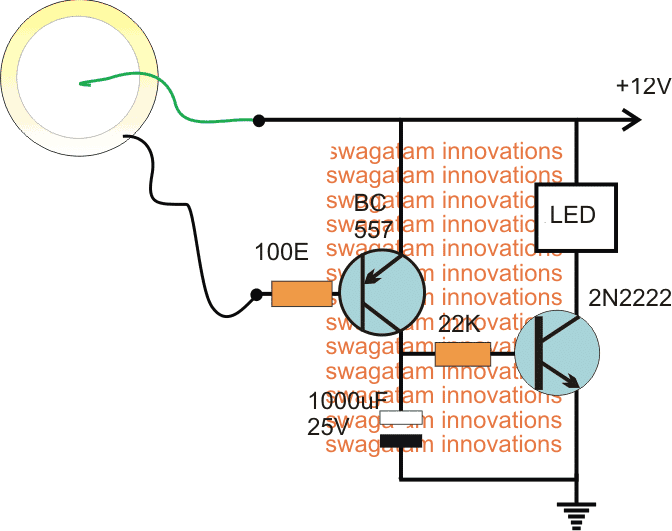 The piezo transducer in the design is used as a pressure to electricity converter. The piezo element is supposed to be embedded within each of the stairs, while each of the associated circuitry to be wired within the nearby wall, along with the LED.

Once done, whenever someone steps on the staircases, the relevant piezo generates a small electric pulse in response to the vibration, which in turn triggers the 2N2222 delay OFF timer stage, and the LED which now lights up for a few seconds and then automatically shuts off.

The above action goes on happening as the visitor climbs the steps, illuminating and shutting off each subsequent LED in a sequential manner.

The second foot activated staircase light circuit idea can be enforced by installing the following across the first and the last staircases.

In the above design two piezo transducers can be seen embedded across the first and the last staircases.

When the first piezo is hit by the foot of the visitor, the tiny electrical pulses generated from the piezo is amplified by the T1/T2 stage and applied at pin#14 of the IC 4017, which is rigged as a flip flop stage here.

The trigger allows the 4017 to toggle ON the relay driver stage which lights up the LED lamp.

The process also triggers a delay ON timer circuit which begins counting the delay for which it is been fixed.

In the meantime the user continues climbing the steps until he reaches the upper most step, and his foot activates the second piezo transducer, which yet again toggles the IC 4017, but this time to switch OFF the relay driver stage and the LED.

In case the user decides not the climb the steps and returns back or takes abnormally too long to complete his journey across the steps, the delay timer comprising T3/T4 switches ON into action and resets the IC 4017 IC causing the LED to switch OFF.

If you have more innovative suggestions to improve the discussed foot activated staircase LED light circuit, please use the comment box for expressing the same.