A simple LED torch circuit that would light up 3 white LEDs from a 6 volt supply and would make your battery last forever is described here.
A useful voltage doubler circuit is incorporated here to make a highly efficient circuit using just a handful of components.

Learn more how to build it. White LEDs are quite renowned for producing dazzling lights at very low currents.
But, if they are not configured cleverly can in fact be pretty poor in the above respect. Learn the simple trick to optimize and make a highly efficient LED torch at home. 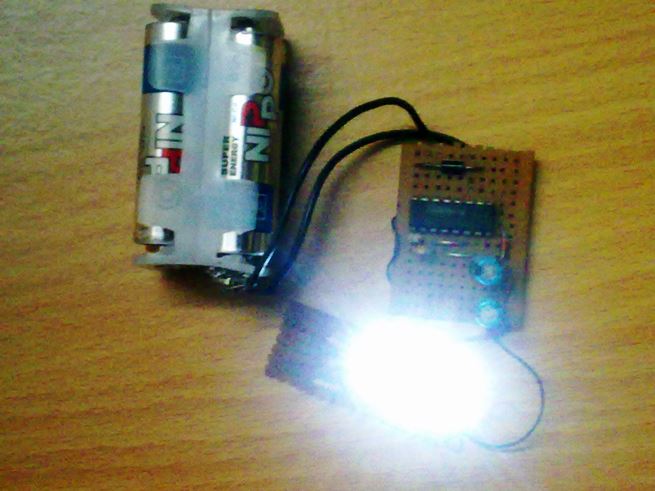 Illuminating 6 LEDs from a 3V Source

Such a LED torch can be truly handy as the light output produced from it is reasonably high with battery lasting almost forever.

Moreover nothing could be as satisfying as building this beautiful circuit right in your home. We know that, LEDs in series always provide better results.

Simply because, just by increasing the required voltage appropriately, we are able to drive the whole series using the same amount of current as required for a single LED.

For example, if we consider a single white LED, it requires about 20 mA of current at 3.8 volts to illuminate brightly, so if we connect 3 such LEDs in parallel, would mean a current consumption of 60 mA – that’s huge, and would discharge a small battery pretty fast, within minutes.

However, if we connect the above LEDs in series and step up the voltage to about 10 volts, it would become possible to light them up using just 20 mA of current, making the whole circuit very efficient.

Using IC4049 Circuit as an Oscillator

Using the versatile IC 4049, which contains six inverter gates or NOT gates in one package, a very simple voltage stepper can be wired.

By configuring two of its gates as an oscillator, we find that 4 of its gates can be tied up in parallel to produce the required buffering to the oscillator output and step this buffered output to drive a single series of 3 LEDs.

To add up more such series you would just require increasing the number of gates (ICs) and using them as buffers for the relevant LED series.

One oscillator will be enough and may be used commonly to drive all these added buffers and the LED series.

In the adjoining figure (click to enlarge) we see how simply a single IC 4049 and few other passive components are used to drive three white LEDs from a 6 volt source at just 20 mA current. 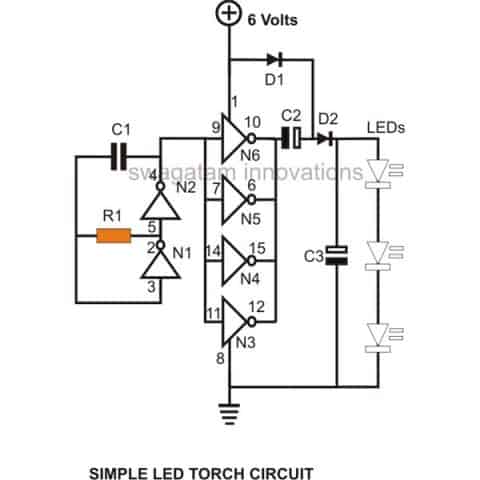 Gates N1 and N2 along with R1 and C1 are all wired up as an oscillator with a frequency determined by the values of R1 and C1.

The remaining gates N3, N4, N5 and N6 are all joined in parallel as buffers, i.e. their inputs are all linked together and connected to the frequency source from the oscillator.

Their outputs are also made into a single common outlet and terminated to the following voltage enhancer circuit.

A standard configuration using two diodes and the same number of electrolytic capacitors are used to create a voltage multiplier circuit.

The above configuration will work only for alternating voltages and will double the received input.

The applied oscillating frequency from the buffers is successfully made almost twice by the above multiplier circuit.

Three high efficiency white LEDs in series are integrated at the output of the voltage multiplier circuit to complete the unit.

The LEDs receive the suitable voltage from the circuit and illuminate quite brightly.

GeneralPurpose PCB = As per size,

Suitable Enclosure = Small plastic box to hold the circuit, batteries and the LEDs.

Building the circuit of this LED torch is pretty easy, just procure all the components and solder them together with the help of the given circuit schematic.

Then it’s just a matter of connecting the battery pack to the circuit and checking its illumination.

If possible check the current consumption of the circuit using a milliammeter, should not be more than 15 to 20 mA.

Enclose the whole unit inside a suitable plastic box; make sure that the LEDs suitably protrude out of the box’s front surface.

You can use suitable reflectors to increase its light output. A fully charged battery pack should last for a very long time, almost more than five years even if used quite frequently. 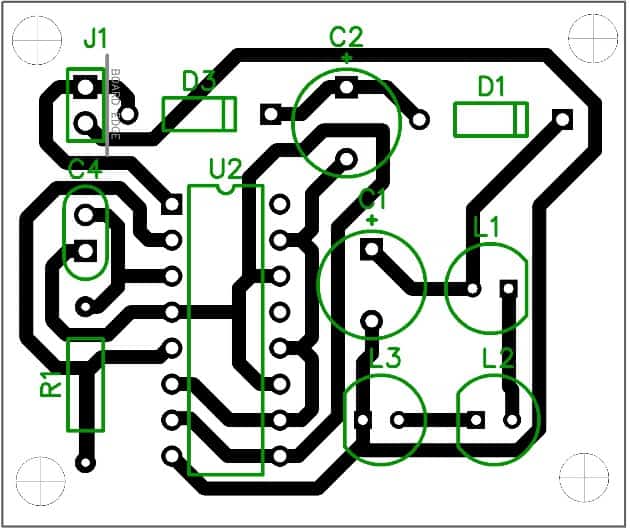