An all-in-one automatic voltage battery charger circuit is discussed in the following post; the circuit can be modified in many different ways as per individual requirements and applications.

The following circuit will allow you to charge any battery right from 1.5V to 24V simply by setting up a given preset.

The circuit functioning may be understood with the following points: The IC LM3915 which is a Dot/Bar voltage display chip forms the main section of the circuit.

The IC has ten linearly incrementing output which sequence one after the other in response to a rising potential fed at its pin#5. Thus the output sequence corresponds to the instantaneous voltage level at the "signal input" pin out of the IC.

The 10K preset associated with the above IC is set as per the battery voltage which needs to be charged. After this the LEds connected at the output linearly indicate the charge level of the battery by illuminating in sequence, and finally when the last LED is lit which happens when the battery gets fully charged, the SCR is triggered shutting off the charging process permanently until the power is reset.

The stage comprising the IC LM338 is a standard voltage regulator IC, the preset associated with IC is set as per the required full charge limit of the connected battery. The transistor BC547 provides a fixed 3V for the connected LEDs for controlling the IC dissipation.

The transistor BC557 remains switched OFF as long as the last LED in the array which may be selected for the full charge indication is not illuminated. As soon as the last "full charge" LED switches ON, the BC557 is also switched ON triggering the SCR.

The SCR instantly grounds ADJ pin of the LM338 completely disabling the IC and the output to the battery. The battery now stops receiving any voltage and thus it is inhibited from getting over charged.

How to Set Up this Circuit

The setting of the circuit may be done in the following manner:

Alternatively if you you are interested in making the circuit respond with all batteries from 3V to 12V then you may adjust the LM3915 preset such that the last LED barely illuminates at 14.4V.

Now each pinout of the IC corresponding to the relevant LED would sequence at the rate of 14.4/10 = 1.4V, therefore for a 6V battery the full charge LED pinout would be 7/1.4 = 5, meaning the 5th LED illuminated would indicate that the connected 6V battery is now fully charge.

For enabling automatic cut off for the above situation you just have make sure the base of the BC557 is connected to the 5th pinout of the IC LM3915 from left to right.

For a 9V battery it would 9/1.4 = 6.4th LEd, meaning when the 6th LED is fully glowing and the 7th LED is barely flickering, the 7th LEd may be selected and joined with BC557 base for acquiring the required automatic cut off.

Using Transistor Latch instead of SCR

If the above circuit fails to respond with an SCR, the following circuit using a transistor latch can be employed: 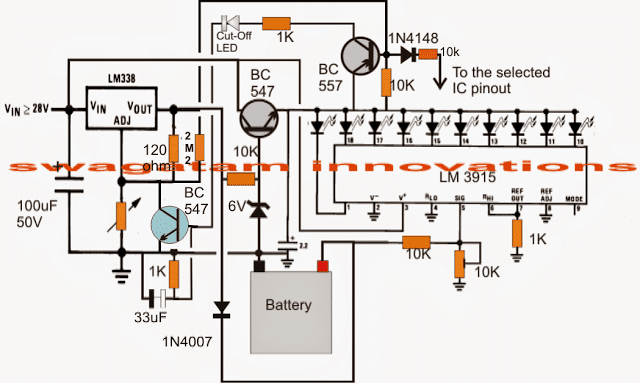 For an Automatic ON/OFF Function

If you want the above multipurpose battery charger circuit to cut off the charger while the battery reaches the full change limit, and then quickly switch ON the charging when the battery starts dropping below the full charge limit, and continue flip flopping at this threshold level, in that case you can try modifying the design in the following manner: 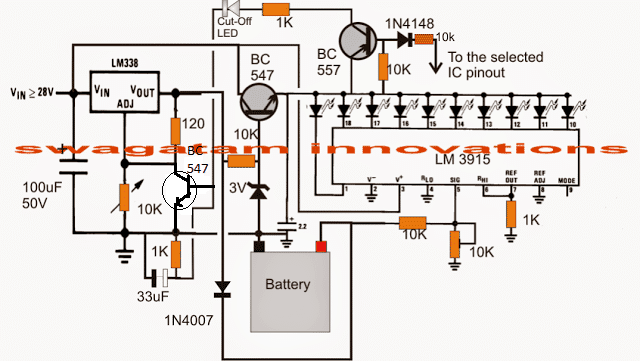