The post explains a simple IC 555 based PWM controller circuit which may be used for controlling the intensity of a specified LED bank. The idea was requested by Mr.Rajdeep.

Fantastic blog you have got. I learnt many things from your blog.

I have read that dimming LEDs by reducing voltage or current lowers the LED lifespan. Is it correct? And the best way to dim LED is by PWM?

I did some more research on this matter and found out that LEDs don't get damaged, but the colour spectrum of LEDs changes at lower current/voltage.

A 6500K LED will move towards 5000K when dimmed, I found this information on some aquarium forum, I can send you the link if you need. Also, they say LED tends to heatup when current-dimmed.

Anyway, can you do a tutorial on pwm of high power LEDs. I have been searching for a tutorial, but could not find any suitable MOSFETs that will work in 5volt, while carrying 20-30amps.

Most MOSFETs work in 10volts, so is it possible to connect a MOSFET to a bc547 & then to a pwm circuit? Will it work, or it will be slow/inefficient?

Can such huge load be controlled by a 555-pwm?

Another question, will a pwm circuit work with a 'LM317 constant current circuit'?

P.S: I am planning to do a full LED aquarium lighting, so I am making sure it will work. Sorry for a lot of questions, I am not an electrical engineer, so I need your help. Sorry for bothering you... 🙂

And will pwm work in series with a 317-constant current driver circuit?
If this works, I am thinking the circuit will be like this:

Thanks Rajdeep! What you have learned from the forums could be completely incorrect and misleading, LEDs work most efficiently when driven with minimal currents, although that would mean proportionately lower intensity.

Driving an LED through PWM actually is not difficult....higher duty cycle will produce higher intensity and vice versa, that's the basic principle behind it.

First let's learn about a 12V LED PWM controller circuit, later at the concluding section of the article we'll see how the same may be implemented using 5V supply and a mosfet.

The following circuit idea shows a simple PWM controller circuit using IC 555 which can be used for controlling LED intensities from 0 to maximum digitally. 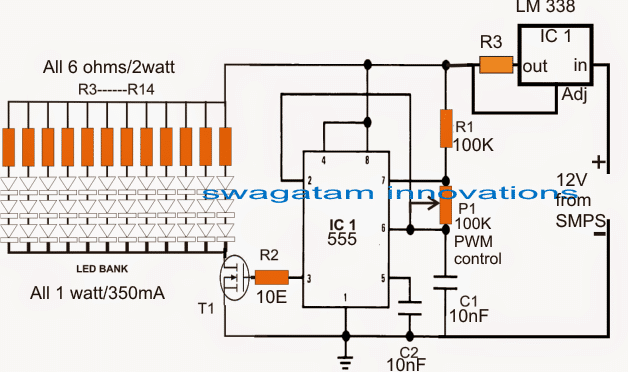 In the image above, the supply is acquired from an SMPS unit which applied to the PWM circuit through a LM338 current controller circuit stage.

The pot P1 is used for adjusting the PWM duty cycles to the LED bank for achieving the desired intensity levels.

The resistor R3 determines the limiting current level from the IC LM338, it may be calculated with the following formula:

The circuit shows a 36 LED (1 watt each) bank being driven by the PWM and the current controller stages.

The LED series resistors are introduced for safeguarding each 3 LED string from over voltage. since the total forward voltage drop of the strings constitute to 3.3 x 3 = 9.9V and the supply voltage 12V that's about 2V higher.

With a little effort you can skip the LM338 stage by modifying your existing SMPS unit to any desired maximum current limit, as per the specs of the LED, the entire procedure may be learned below:

How to make a variable current SMPS circuit

In cases where the supply voltage is restricted to 5V, and the intended applications requires a PWM control of the LEDs through a mosfet, the following circuit can be suitably used for the same. 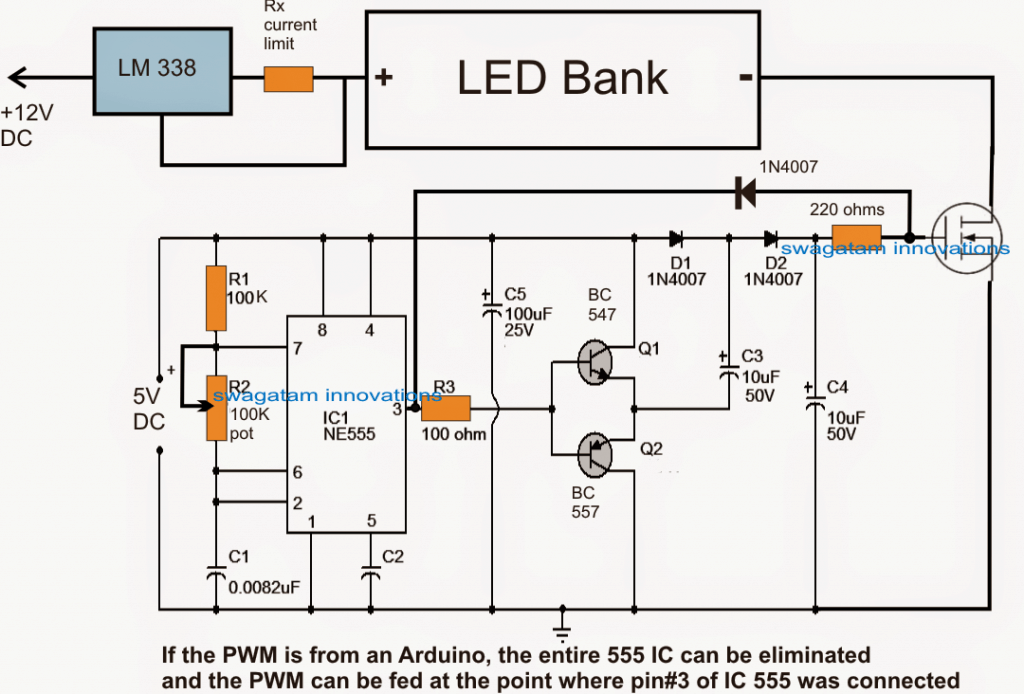 As we can see, the above configuration  is identical to the first one, barring the addition of the voltage booster stage between pin3 of the IC 555 and the mosfet gate.

Here a couple of diodes and capacitors effectively raise the pin3 PWM level from 5V peak to 10V peak, this becomes imperative since a mosfet is being used for the regulations, and mosfets do not respond optimally with gate voltages lower than 9V.

The shown mosfet gate voltage booster stage can be also applied with PWM outputs that may be derived from an Arduino board or other MCUs.