In this post we elaborately study how to make an Arduino based PWM signal generator circuit, which can be set or adjusted with a potentiometer or a pot to any preferred duty cycle ratio.

And frequency plays very important role in pwm, which must be high enough to generate stable output

Pwm is also one of the factors that make arduino a simplest development board, as pwm can be done by adding just one line code to your program. Note that there are separate digital pins available on arduino UNO for pwm which means these pins can give pwm output.

There are total 6 pwm pins available on arduino UNO that are 3, 5, 6,9,10 and11 out of 14 digital pins. Note that number of pwm pins vary from one type of arduino board to another.

Now there are two ways in which pwm can be performed by arduino:

1. By directly assigning an analog value to the pwm pin between 0 and 255.

Since digital pins in arduino can provide maximum of 5v that means 0 analog value is equal to 0 volts and 255 is equivalent to 5 volts.

And to perform this you have to just add this code to your program:

2. By assigning value according to the input received from analog pins of arduino.
Input can be taken from components like an IR sensor or a potentiometer.

Note that arduino receive analog input in terms of  value between 0 to 1023 which is equivalent to 0 to 5 volts.  So to perform pwm on a pin you must convert this input value in equivalence to number between 0 to 255 and this is called mapping in arduino’s language.

There is a simple code for this:

After this you can perform pwm on a pin using:

We are going to learn both the technique with this example. For this you need: 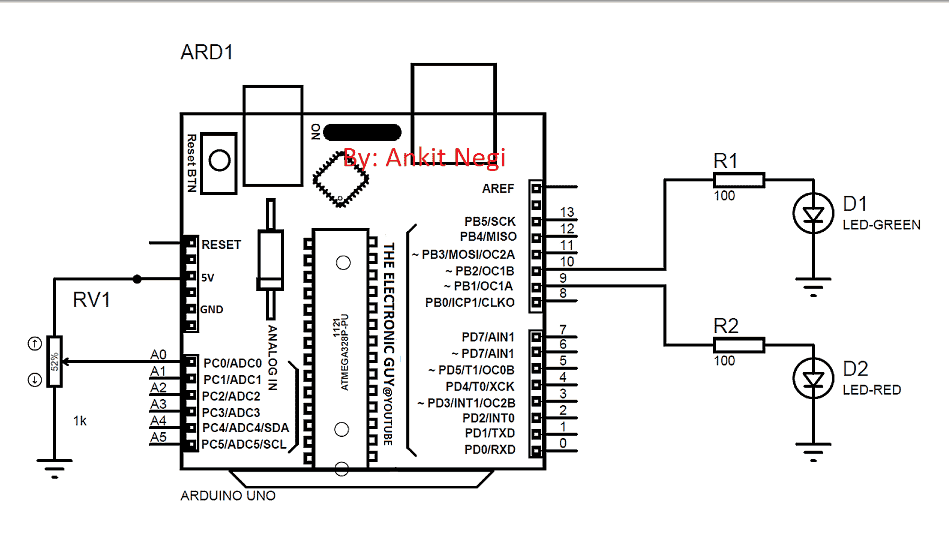 Pin no 9 can be assigned arbitrary pwm value whereas pin no. 10 gives pwm value in accordance to the position of the potentiometer with respect to ground. Keep changing this arbitrary value for pin 9 as well as rotate potentiometer to see different pwm output on both pins.