Converting water into free HHO fuel gas can be extremely inefficient if ordinary means are employed for the involved electrolysis of water. In this post we try to investigate a circuit design which might be capable of extracting this gas from water using minimum energy and with high efficiency.

I want to use this pwm motor controller circuit to control hydrogen on demand production of a hho cell on a test generator.

Hho gas boosting on cars engines might also be tested so I want to use a standard pwm circuit that will be able to test hho production for both small & bigger engines.

Would it be advisable to go from start & use for instance a higher current 12V 55Amp Mosfet Transistor plus more protection on the load side? What do you suggest?

Then last but not least, are you aware or knowledgeable about producing hho gas by making use of a resonant frequency circuit to create harmonic resonance or oscillation by making use of a 555 timer chip & a variable pot in the circuit to set the frequency of the circuit on the water's natural frequency in the hho cell that acts as a water cap & disassociate the water molecules into a hydrogen & oxygen gas mixture without making use of any electrolyte in the hho cell for conduction. Or if you know a circuit that works well in this respect could you please let me know were I can find it.

Thank you for your valued electronic knowledge & unselfish input we all really honor you for it. Best Regards Daan

You might be familiar regarding how a Stanley Meyer's fuel cell apparatus works and how it is able to generate HHO gas using minimum consumption.

According to the theory suggested by Stanley Meyer (inventor of the HHO gas generator circuit), his apparatus could be used for generating HHO gas much efficiently such that the power used for the generation could be much less than the power produced while igniting the gas and for transforming the results into a particular desired mechanical action.

The above statement blatantly contradicts the standard laws of thermodynamics which says that no energy conversion from one form to the another can exceed the original form, in fact the transformed energy will be always less than the original energy source.

However the scientist seems to have proofs that actually confirm his statement regarding his invention's overunity output capability.

Like most of you I too personally have a great respect for the laws of thermodynamics and would most probably stick to these and have little faith on such hollow statements made by many researchers, regardless of what proof they are able to submit, these could be manipulated or faked in many hidden techniques, who knows.

Having said that, it's always a great fun to actually analyze, investigate and test the validity of such claims and figure out if these had any traces of truth, after all a scientific law can be beaten only by another scientific law which may be more equipped than the traditional counterpart.

Now as far as the generation of HHO gas is concerned, we all know about the basics that it can simply be produced through an electrolysis of water, and the generated gas will have the property of being hugely inflammable and capable of generating energy in the form of an explosion when ignited externally.

We also know that an electrolysis of water can be conducted by applying a potential difference (voltage) inside a water content by inserting two electrodes connected with an external battery or DC power source. The process would induce an electrolysis effect inside the water generating oxygen and hydrogen over the two dipped electrodes.

Finally the generated oxygen hydrogen gas together can be passed through pipes appropriately terminated from the electrolysis vessel into another chamber for the collection.

The collected gas then can be used for executing a mechanical action through an external fire ignition. For example this gas is normally and popularly used for enhancing automobile engines by feeding it into the combustion chamber through the air intake pipe for improving the engines RPM efficiency by about 30% or even more.

However the contradiction and doubts regarding the concept start arising when we study the law of thermodynamics which simply rejects the above possibility because according to the law, the energy required for the electrolysis would be much higher than the energy obtained through the HHO gas ignition.

This means that, if suppose for example the electrolysis procedure requires a potential difference of 12V at 5amp current, the consumption could be calculated to be around 12 x 5 = 60 watts, and when the resultant gas from the system is ignited it wouldn't yield an equivalent power of 60 watts rather perhaps only a fraction of that, at around 20 watts or 40 watts.

However, according to Stanley Meyer, his HHO fuel cell apparatus relied on an innovative theory that had the capability of bypassing the thermodynamic barrier without conflicting any of the rules.

His innovative idea employed the resonance technique for breaking the H2O bond during the electrolysis process. The electronic circuit (quite low tech compared to the ones that we have today) which was used for the electrolysis was designed to force the water molecules to oscillate at their resonating frequency and break apart into HHO gas.

However, a wise analyst and researcher was quick to understand the technique used by Stanley Meyer, and after checking the circuit carefully he completely ruled out of any resonance effect in the process, according to him the word "resonance" was used by Stanley just to mislead the masses so that the actual concept or theory of his system could remain concealed and confusing.

I appreciate the above revelation and agree with the fact that there's no resonance effect required or was used by the most efficient of the HHO fuel cells invented so far.

The secret being simply in the introduction of a high voltage into water through the electrodes..and this does not necessarily need to oscillate, rather a simple DC boosted to huge degrees is required for initiating the high quantities HHO generation.

How to Generate HHO Gas Efficiently

The following simple circuit can be used for breaking water into HHO gas in large quantities using minimal current for the results. 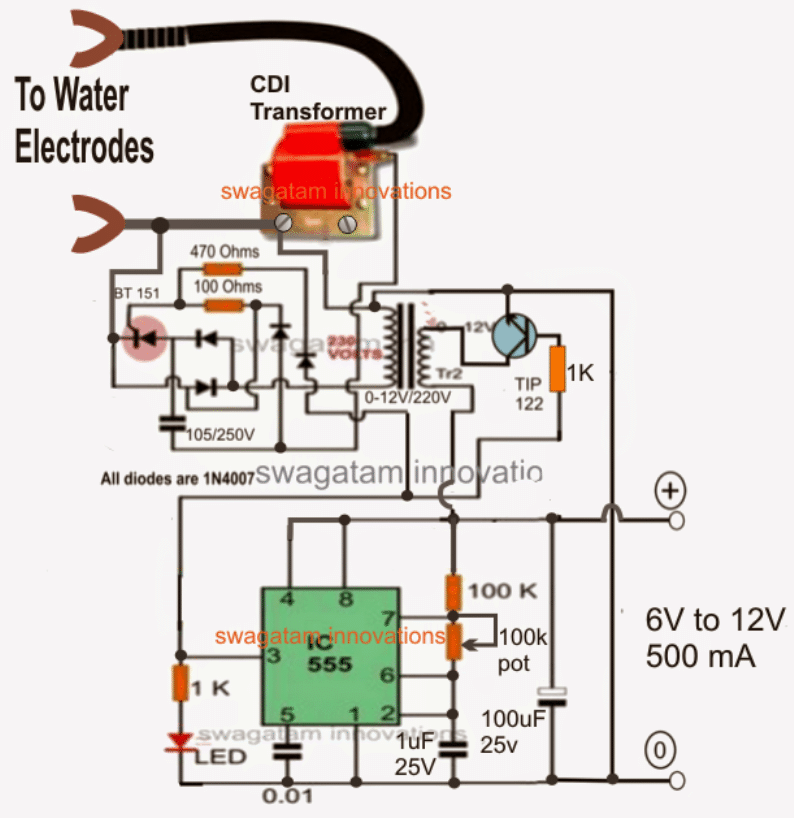 When it comes to the generation of high voltages, nothing can be easier than using a CDI transformer, as may be witnessed in the above diagram.

Basically it's a CDI circuit which is supposed to be used in automobiles for enhancing their performances, I have discussed it elaborately in one of my previous article how to make an enhanced CDI, you can go through the posting for a better understanding of the design.

The same idea has been employed for the proposed HHO gas generation with maximum efficiency.

Let's try to understand how the circuit works and is able to generate massive voltages for splitting the water into HHO gas.

The circuit can be divided into 3 basic stages: the IC 555 astable stage, a step-up transformer stage and a capacitive discharge stage using an automobile CDI transformer.

When power is switched ON, the IC 555 begins oscillating and a corresponding frequency is generating at its pin3 which is used for switching the connected transistor TIP122.

This transistor being rigged with a step up transformer, begins pumping power into the primary winding at the applied rate, which is appropriately stepped up to 220V across the secondary winding of the trafo.

This 220V stepped up voltage is used as the feed voltage for the CDI, but is implemented by first storing it inside a capacitor, and once the capacitor voltage touches the minimum specified threshold limit, it's fired across the CDI primary winding using a switching SCR circuit

The dumped 220V inside the primary of the CDI coil is treated and boosted to a massive 20,000 volts or above by the CDI coil and terminated out through the shown high tension cable.

The 100k pot associated with the IC 555 can be used for regulating the firing timing of the capacitor which in turn determines how much current may be delivered at the output of the CDI transformer.

The output from the CDI coil can now be introduced inside the water for the electrolysis process and for the the HHO generation.

A simple experimental set up for the same may be seen in the following diagram: 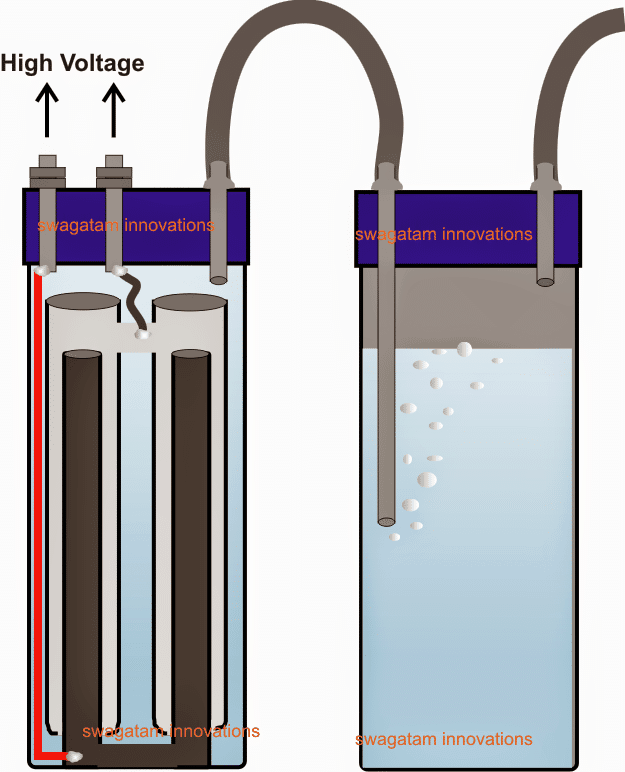 In the above HHO gas generator set up, we can see two identical vessels, which should be made up of plastic, the left hand side vessel can be seen consisting of two parallel hollow stainless steel tubes and two stainless steel rods inserted within these hollow tubes.

The two tubes are electrically connected with each other and so are the rods but the tube and rods must strictly not touch each other.

Here the rods and the tubes become the two electrodes, immersed inside the water filled vessel.

The lid of this vessel have two terminals for integrating the immersed electrodes to the high voltage from the high voltage generator circuit as explained in the earlier section of this post.

When the high voltage from the circuit is switched ON, the water trapped inside the tubes (between the internal walls of the tubes and the rods) are rapidly electrolyzed with the high voltage and converted into HHO gas at an astonishing speed.

However this gas generated inside the left vessel needs to be transported to some external vessel for the intended usage.

This is done through a connecting tube across the other vessel on the right.

The collector vessel on the right also has water filled in it so that the gas can be bubbled out into the chamber, but only while it's being sucked out and used by the external combustion system. This set up is important for preventing accidental explosions and/or fire inside the collector vessel

The above procedures in conjunction with the high voltage can be assumed to be capable of generating high amounts of  ready to use HHO gas efficiently, producing an output that could be 200 times higher than the consumed input input power.

If you feel that the above  explained CDI coil method is too complex then instead you can use a simple inverter circuit for the intended results. Make sure to use a 6-0-6V/220V 5 amp transformer for an effective conversion.

Simply Immerse the transformer output wires in water through a bridge rectifier, quite like this