The post explains an innovative brake light circuit using speed detection of the vehicle which could be a motorcycle. The circuit implements an advanced brake light switch ON ensuring a much safer riding experience for the user. The idea was requested by Mr. Rayan. 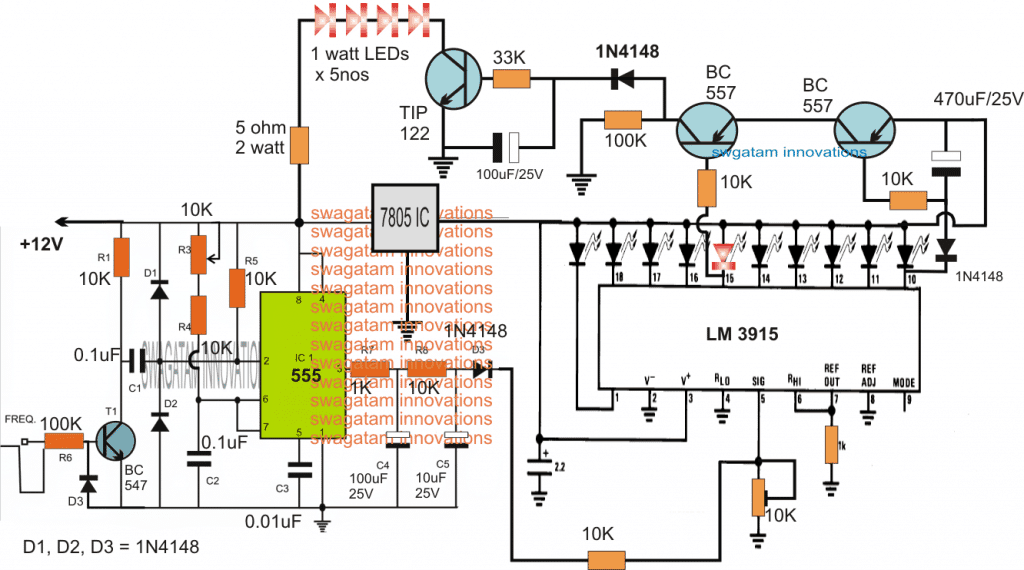 The tachometer circuit stage is configured as an integrator for processing the clock signals from the pick up device of the motorcycle.

The pickup coil translates the engine speed into correspondingly varying clock rate (Hz) which is applied at the base of the BC547 associated with the IC 555 circuit.

These clocks are processed and converted into a exponentially varying voltage across the RC network attached with pin#3 of the IC 555.

The above integrated output is fed to the sensing input of the indicated LM3915 LED dot mode driver stage.

The 10 LEDs connected across the output pins of the LM3915 respond to the exponentially rising and falling voltage levels from the IC 555 output and correspondingly produce a sequentially jumping logic lows across these LEDs, which light up in the identical sequence from left to right, and vice versa.

Since the IC is configured in the dot mode, only one LED lights up at a time while shutting off the preceding ones as the sequence progresses or dances along the line.

This up/down movement of the LEDs represent the speed of the vehicle (or the gear level) and this outcome is exploited by the couple of transistors for switching ON the brake lights through speed detection.

The idea here is to detect the speed and switch ON the brake lights only when the speed is detected to be slowing down relatively faster, and ignoring the slower transitions or the delayed changing of gears.

This is important to ensure that the brake lights do not light up on normal lower gear changes intended only to reduce speed, rather than to halt the vehicle at some nearing destination.

This is implemented by the smart use of the two pinouts (arbitrarily selected) and the two respective BC557 transistors attached with the relevant pinouts of the IC LM3915.

The preset at pin#5 of the IC is adjusted such that at relatively higher speeds and gear levels, the last LED in the sequence at pin#10 is switched ON (activated), which correspondingly switches ON the attached right side BC557 transistor.

During this time the left side BC557 shown connected at pin#15 is kept switched OFF (since only pin#10 is ON, rest are switched OFF), therefore the LED driver using the TIP122 is also held switched OFF, and consequently the brake lights are also shut off.

Now, in case the vehicle which could be a motorcycle is intended to be stopped by the rider, and therefore its speed reduced relatively quickly, results in the output of the LM3915 sequencing backwards proportionately and touching down at pin#15.

Since the above sequencing can be expected to happen at a quicker rate, the BC557 at pin#10 is held switched ON by its base RC network even while its base trigger has moved and sequenced across pin#15.

At this instant both the BC557 can be expected to be switched ON, and the LED driver along with the brake lights are also switched ON....the brake lights now light  up brightly for some moment of time until the time pin#10 BC557 is able to retain its base capacitor charge level to the optimal switching point.

Hi all, . As the purpose, as far as I’m reading it, can be boiled down to: Signal whenever the vehicle decelerate at a certain speed (when the velocity change surpasses a given amount/unit time), no matter vehicle type/ignition system/gear/etc. iow, when an unknown mass decreases velocity how much, in a given time frame. . The easiest way, yielding the highest precision (no matter where its used), is an analog output acceleration sensor. Using the X-axis output (if accelerometer is installed correctly), or summing X, Y and Z axis. One op-amp (or better a comparator), can control a transistor or… Read more »

The purpose of this circuit isn’t making sense to me. Older motorcycles may have a generator driven light that dims as rpm dies down, but newer motorcycles do not. Also, having brake lights get brighter or dimmer when used is a good way to get yourself killed in bad weather – like fog.

I am lost on the purpose of this circuit.

How is this helpful?

This circuit will not make the brake lights brighter or dimmer, rather will cause them to switch ON fully whenever the vehicle speed decreases to some minimal level, and even before the actual brake lights are initiated. So it will help the other motorist who are following from behind to know that this vehicle is slowing down dangerously and might ultimately stop. Even if the vehicle does not finally apply the brakes, it still gives the other motorists an idea regarding the vehicle slowing down to unpredictable levels.

Hello.
Can I use for car? Where to connect to car?
Thanks.