In this post we learn how to make an useful motorcycle accident alarm circuit for sending alarm signal to the distant population in an event of an accident, especially if it happens in a relatively lonely area. The idea was requested by Mr. Rayan D'souza. 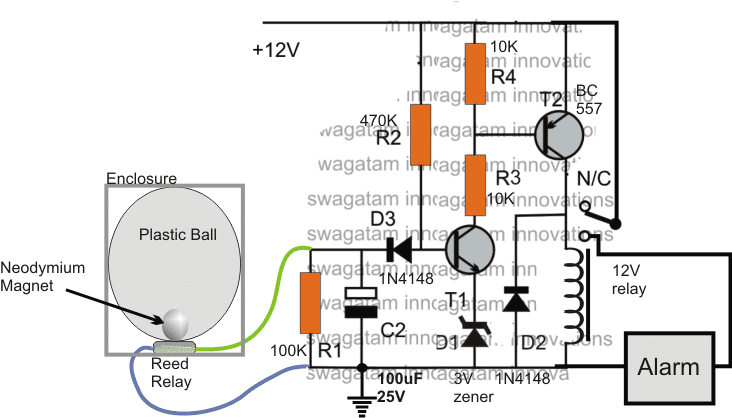 A simple motorcycle accident alarm circuit can be built at home with the help of the design shown in the above figure.

The circuit is made up of two stages, the tilt sensor, and the delay ON alarm stage.

The sensor can be seen at the left side of the design, consisting of a plastic ball, a small spherical neodymium magnet and a reed switch.

The magnet is inserted into the plastic through a temporary hole made at the top, which is later on sealed with epoxy glue.

On the outer side of the ball, a reed relay switch is glued such that the magnet and the reed lie side by side with only the ball plastic separating them.

The above situation is supposed to keep the reed relay switched ON as long as the ball is not tilted and the magnet inside is vertically still in the shown specified position.

The reed relay output can be seen integrated with a delay On relay timer circuit comprising a couple of BJTs and the associated resistors and capacitors.

In the normal situations, while the reed relay is in the activated position, the base of T1 is held grounded and the delay ON timer is unable to react, and remains in a dormant condition.

The sensor unit along with the circuit is supposed to be fixed in the bike such that as long as the bike is in its vertically standing position, the magnet maintains its position around the bottom center of the ball.

However in an event of an accident, when the motorcycle could be in a tilted situation the magnet would roll and be displaced from the specified position allowing the reed switch to open.

As soon as the reed relay opens, C2 begins charging and the delay circuit begins counting.

Depending on the values of C2 and R2 (which could be set for 5 seconds delay), C2 charges fully and triggers T1 into conduction.

This in turn switches ON T2 and the relay, sounding the alarm, and informing the people around regarding the mishap.

The alarm is stopped as soon as the motorcycle is lifted on its upright position or the battery power is disconnected.