The post explains a beacon indicator circuit for combine harvester grain tanks. The idea was requested by Mr. John Bosch.

The proposed beacon level indicator for grain tanks can be very simply implemented using an IC 555 circuit in its astable mode, as shown below: 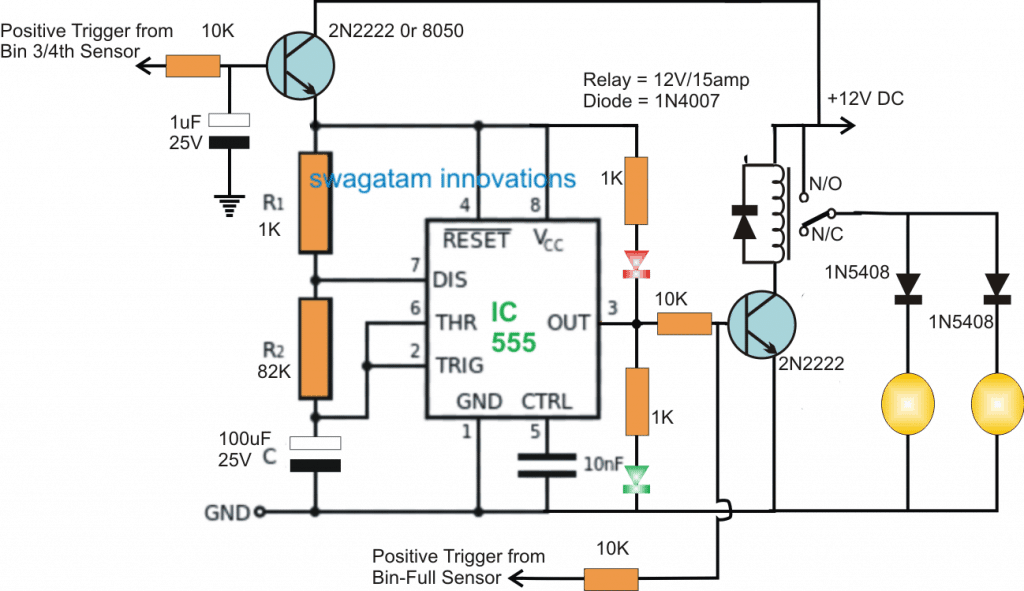 The IC 555 is configured in its standard astable mode (flashing mode), where R1,R2, and C values determine the flashing rate of the IC at its pin#3.

These values are calculated to produce a reasonably precise 5 second ON/OFF switching on pin#3 of the IC.

Pin#3 can be seen connected with a relay driver stage whose contacts are configured with the indicator beacon LED lamps.

When the +12V supply from the relay side is switched ON, the circuit is put on a standby position and ready to respond to the signals from the bin sensors.

As soon as the first signal is received from the "3/4 tank full sensor" the astable gets powered through the relevant 2N2222 transistor on the top left, and the circuit immediately begins oscillating at the set rate.

The relay follows the ON/OFF triggers from pin#3 of the IC and initiates the required 5 second ON/OFF activation for the attached rotating beacon lights, indicating that the 3/4 tank full level is reached.

The above ON/OFF is sustained for a period of time until the grain tank reaches its full level, when the subsequent trigger from the "full level sensor" causes a permanent activation of the driver transistor and the relay.

The relay now becomes locked and enables both the beacon indicator lamps to be ON and rotating, indicating the "tank full" situation to the user.