The post describes a simple 220V  mains transformerless LED candle light circuit which switches ON automatically in the absence of ambient light in the room and vice versa. The idea was requested by Mr. Don

I only dabble with electronics here and there but in trying to move from incandescent and CFL's to LED's I have come across a strange dilemma.   I have used electric 110v-120v "Sensor Candles" for many years and they employ a very simple circuit of an LDR/Resistor/Switching Transistor on a circuit board about 1/2" square that fits into the body of the candle.
The candles (not flickering) use c7 5-7 watt incandescent bulbs.  The equal c7 LED of about .5 watts do not work in these candles.  What is it about the LED bulbs that causes them not to work?   Is there a modification that can be done to the existing circuit boards to make them compatible with LED's?   I have searched all over for electric candles that use LED's and can find none.  The LED candles that are available are only battery operated.  It boggles my very old and simple mind that the switching transistor does not simply switch the necessary voltage to the LED.
I find it hard to understand why these products have not been produced to function with LED's.  Perhaps this is a product to might want to design for manufacturers.   I have one grandchild who has a degree in electrical and computer engineering that promised to review the possibilities but other his other priorities have taken precedence, even though I told him that a patent on the idea might be rewarding.
I can send you a candle, circuit board, or whatever information you may require.
Thanks,
Don Jengo 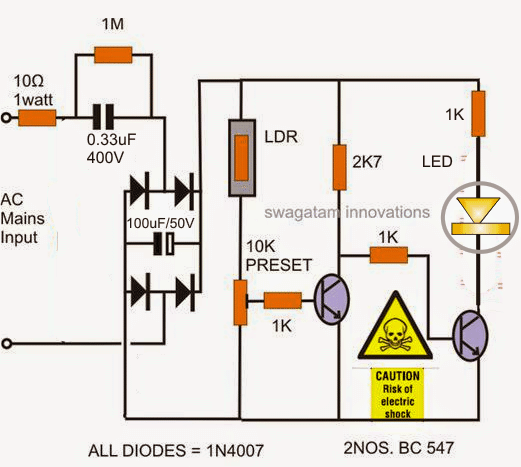 The proposed automatic darkness triggered candle light circuit can be seen in the shown diagram which uses an amber colored LED for simulating a candle light effect.

As per the request the circuit needs to be LDR based which also means the unit must activate only when it's sufficiently dark inside the room or as soon as the main indoor lights are switched OFF, or when the user goes to bed.

The presented automatic LED candle light is very straightforward and fairly reliable with its operations, let's understand it through the following explanation:

The 0.33uF/400 V capacitor along with the four diodes and capacitor forms a compact transformerless power supply circuit stage for powering the LED during dark or in the absence of ambient light.

The first transistor from left in the presence of ambient light conditions receives sufficient base drive via the LDRs lower resistance and conducts to keep the base of the second BC547 at ground potentials.

Due to this the second transistor remains inactive and switched OFF making sure that the connected LED also remains switched OFF under such ambient external illuminations.

However as soon as the ambient light around the LDR diminishes or is switched OFF, the left transistor is inhibited from the base drive due to the LDRs high resistance in the absence of ambient light, which further prompts the right hand side transistor to start conducting, thereby switching ON the LED.

The opposite reaction is quickly exhibited in case the ambient light is switched ON or during daybreak.

Caution: The circuit is not isolated from mains voltage, utmost care and precaution is expected from the user wile assembling, testing, installing the unit in powered situation.

The LDR must be appropriately enclosed inside a suitable cover such that the LED light never reaches it under any condition, otherwise it may lead to false triggering and oscillations of the circuit and the LED.