The following post illustrates a simple light toggled/operated remote control circuit, which can be activated by an ordinary flashlight or more effectively through  a laser beam unit (key chain type).

The circuit idea may be understood with the below mentioned points:

Transistor T3 alnog with the associated parts and the LDR forms a simple light sensor stage.

The LDR is connected across the base of the transistor  and the negative supply such that when light falls over the LDR, BC557 receives the required base bias and conducts.

When BC557 conducts, the high potential at pin 14 of IC1 is pulled to logic  high, and the output of the IC changes state activating or deactivating the relay.

The above condition persists until the LDR is illuminated again with a flashlight or with a laser beam.

The above operation alternately toggles the output ON and OFF providing the required toggling actions to the connected load.

The LDR must be covered inside an opaque pipe, about  an inch long so that the ambient light stays obstructed from the LDR.

The angle of the pipe should be kept in a such a way that it facilitates easy focusing of the light beam toward the LDR.

C6 ensures that the system does not respond to accidental spurious light beams in case it finds its way inside the pipe, and over the LDR. 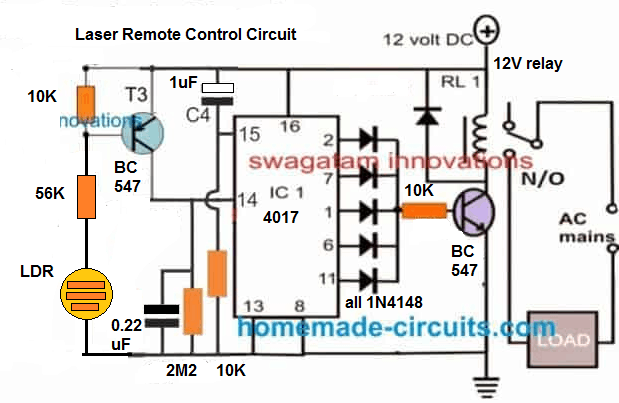 NOTE: T3 IS INCORRECTLY SHOWN AS BC547, IT IS ACTUALLY A BC557 PNP TRANSISTOR. 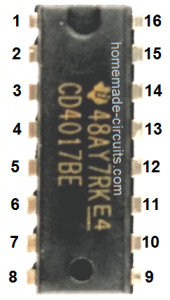 Parts List for the above light operated remote control circuit