In this article we are going to construct a Faraday flashlight circuit using only a coil/magnet assembly which requires no battery. It’s not free energy, but it converts oscillatory motion to electricity, which can power the flashlight for a couple of minutes. This flashlight will be useful in emergency situations where no access to electricity or batteries.

The principle used in this flashlight design was first discovered by Michael Faraday, when he proved that when a magnet was moved within a coiled conductor, electricity was generated in the conductor.

The same concept is implemented in this design wherein a magnet is rapidly moved within a copper coil forcing electrons to flow through the wire and generating the required electricity for the LED illumination. In this design we go a step further and enhance it with a joule thief circuit and a super capacitor to produce higher amount of sustained glow on the LED.

The heart of this enhanced Faraday flashlight circuit is the supercapacitor which can charge and discharge at greater rate than traditional rechargeable batteries. The power is generated by oscillatory motion by our hand, which will move magnets to and fro, which induces potential on the coil.

The voltage induced in the coil is fed to supercapacitor, charges and illuminates a 0.5 Watt LED for couple of minutes. A PVC pipe or similar can be used for flashlight’s body, but make sure it’s made of sturdy material and will not wear and tear easily.

A cotton ball or similar soft material should be placed on top and bottom of the flashlight for smooth stopping of the magnet while charging the torch.

The magnets are round neodymium magnets stacked one another which give cylindrical form, around 10 of them are sufficient.

The coil is vital part of the crank flashlight circuit which charges the supercapacitor. Try to make neat as possible.

•    The coil should be enameled copper wire with 0.5mm in diameter.

•    The coil should be wounded 3 cm across the tube, and make it 0.5 cm thick with multiple layers.

•    Make sure the coil stays tight and protect it with insulation tape or something similar.

The supercapacitor alone is not enough to light a LED, the voltage may drop soon and remaining energy stored in the capacitor stay unused. So we are going to utilize joule thief circuit, which boost up the remaining power in the supercapacitor, which gives extra life to LED.

The proposed Faraday flashlight circuit consists of generator coil which is static, and generates power for the supercapacitor. The induced voltage is alternating current due to oscillatory motion; a bridge rectifier is utilized for converting to DC voltage for charging supercapacitor. This circuit summarizes the charging circuit. 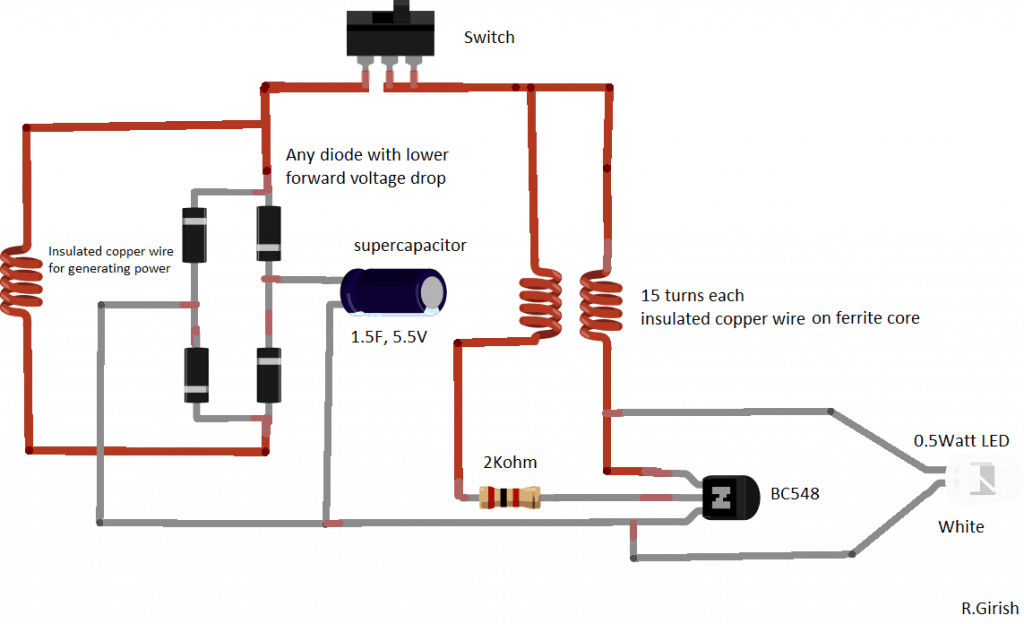 The LED driver circuit is a normal joule thief circuit, which takes low voltage from the supercapacitor and boosts it up for the LED.

For longer LED illumination use couple of standard 0.5mm white LEDs in series instead of one 0.5 Watt led.

Make sure to switch off the flashlight before shaking it (charging).

Do not use supercapacitor with greater than 1.5F as it may take longer charging duration and may be not suitable for this project. Make sure the voltage rating is around 5.5V, using lower value may overcharge the capacitor.