The door security alarm circuit discussed in this article alerts the user whenever the door fitted with the circuit is opened or closed or even moved from its original locked position.

Using a Reed Relay and Magnet for the Triggering 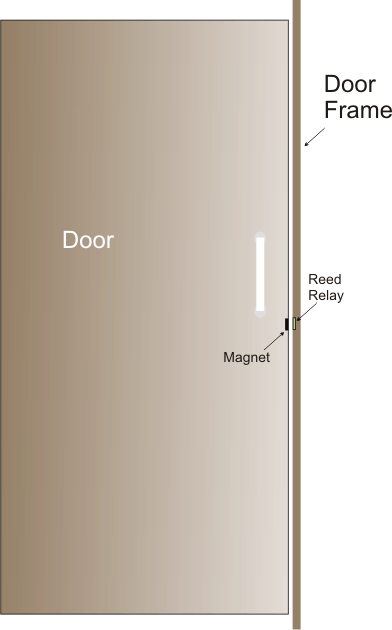 This implies that whenever the door is moved or opened the magnetic influence on the reed relay is inhibited, which causes the associated circuitry to trigger the alarm.

The reed relay is connected with a delay OFF timer circuit, which makes sure that as soon as the door is opened or closed even for a fraction of a second causes the alarm to activate and sound for at least a few 10s of seconds, after which it automatically resets, until the door is moved yet again. 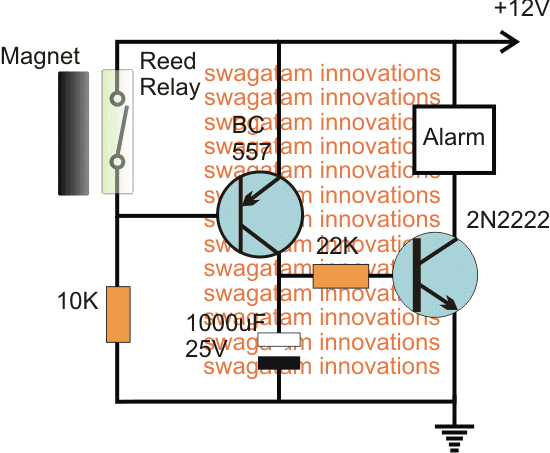 The arrangement can be seen in the above diagram which shows how the door open close alarm circuit needs to be configured which appears pretty straightforward.

As long as the door remains in the closed position, the magnet enables the reed in the switched ON or "closed" position, which in turn keeps the PNP BC557 switched OFF.

With BC557 switched OFF, the 2N2222 is also unable to conduct, and thus the connected alarm module continues to be silent.

However in a situation where the door is moved or opened by an intruder, causes the the magnet to shift from its original position, which instantly opens and releases the reed internal contacts.

The above action now enables the BC557 to conduct, subsequently enabling the 2N2222 also to trigger and ultimately switch ON the connected alarm unit.

The intruder realizes this and tries to close the door in an attempt to shut off the alarm, however due to the presence of the 1000uF capacitor, and the 22K resistor at the base of the 2N2222, the transistor continues to conducts ensuring that the alarm is not switched off even though the door is restored at its initial position....thus the alarm stays latched ON and continues to raise the alarm forcing the intruder to surrender himself, until the 1000uF capacitor has discharged completely.

This little inexpensive yet highly efficient door opening alarm circuit can be used for securing any desired entrance from a possible intrusion without the need of a constant monitoring or without a guard in position.