This power interruption alarm circuit will alert you whenever there's a power failure or an interruption in the mains. In some special conditions it becomes imperative to know whether the mains that powers some important system or circuit is absent.

How the power failure alarm works

This proposed circuit is connected to the power mains via the transformer T1. The AC voltage is rectified by the diode D1 and is filtered by C1.

As long as there is a voltage level present at the anode of D2 (around 12 volts), transistor Q1 is able to conduct maintaining a negligible voltage at the gate of the SCR (TR1). Thus the SCR is not able to get triggered, ensuring no triggers and no alarm tones.

It can be seen that the SCR is permanently attached with a 9 volt PP3 battery.

In an event of a mains failure, the voltage from the transformer disappears, the transistor Q1 is instantly cut-off, diode D2 ensures that no current is able to reach Q1 base from the battery power. Also, The battery forward biases diode D3 and a current flows through R2, R3 and R4 resistors.

This situation raises the voltage level at the gate of TR1, activating the SCR and the attached buzzer that warns of the situation or the absence of mains voltage.

The moment the power returns, the signal error message does not disappear because the thyristor holds itself in latched condition due to its inherent properties (with DC supply SCRs once triggered stay latched permanently), even though its gate now is rendered with a zero voltage.

In order to cut of the alarm and restore the condition, it may be only necessary to disconnect the battery supply momentarily via a switch (not shown in the diagram) placed in series with the 9 volt battery or in series with the thyristor anode or cathode.

Note: The buzzer may be replaced by a relay for enabling a visual warning or both. 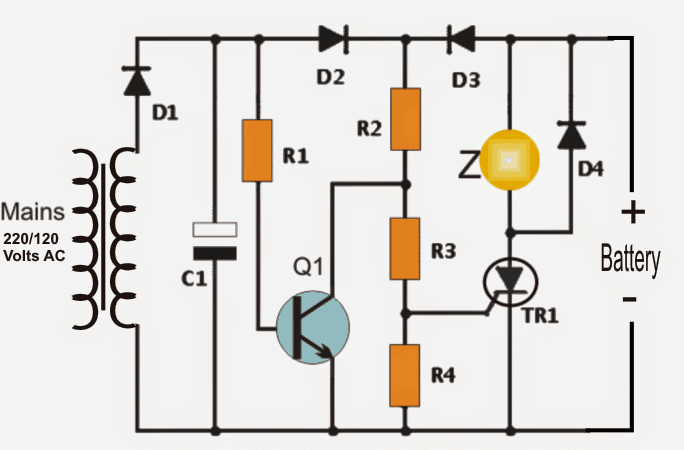 Bill Of Materials for the proposed power interruption alarm circuit