You are here: Home / Free Energy / Charging a Small NiMh Battery from Air

In this post we will try to investigate a circuit which can charge a small Ni-Mh battery by extracting free energy from the ether or air. Let's learn more

Discussing how to Derive Free 9V from Air - By Steven Chiverton

Mr. Steven has devised an ingenious way of collecting energy from the air and using it for various useful purposes like for charging small 9v NiMh battery, or for making high voltages etc.

The experiments are indeed very intriguing and I definitely want to share them with you all, let's know more from Steven himself......

Thanks pal you are welcome to put my stuff up in your blog, at least its getting shared around. There's more yet to come including my nmh battery charger experiments powered from the sec tower output now remember this i integrated ideas i find on the net together to come up with these new experiments like the polarity indicator i modified it to use as a sec tower energy output indicator or tester and then there's a led power meter circuit from a talking electronics site.

I modified that to use the energy output from the tower to charge hv caps up to and still light an afremenko plug up to and charge my nmh battery to and then there's the free energy from air circuit same as the one featured on the inventors 3 youtube videos which is the same on the youtube video titled Tesla's little secret.

This circuit works wonders when integrated with others and soaks up more energy when placed next to the modified polarity indicator circuit which is now the sec power output tester or indicator so you see, ideas and integrating one circuit into another is an ingenious way to come up with new ideas and experiments.

And then there's the ac operated relay circuit originally used to allow ac to operate a dc relay so a small modification to it allows my to get more RF energy from the sec tower .

The same circuit cannot step up the voltage fed into a transformer in reverse mode to get stepped up ac for some reason but it does great for RF voltage RF currents so that i integrated into the whole system , so its the way to go, find a circuit improve it upgrade it modify it and integrate it into other circuit ideas.
If you think that's great i have video footage of experiments where i can use any transformer any way around as an em pick up via simple vlf receiver circuit and even relay coils and, even ignition coils with there internal soft iron shielding inside the can and around the coil.
And when i play a cassette tape right up against the ignition coil the sound from the tape is EM induced right through that ignition coil and through the soft iron shielding and comes right out the VLF receiver circuits headphones.

In other words i can listen to a radio through an ignition coil and its easy with relays to as the coil in it is my em pickup coil and that's interesting .

And the same VLF receiver circuit allowed me to listen to the em RF energy from the sec exciter tower to its a hum a little slower than mains hum that's what i hear .

The first circuit is a slightly modified led power meter from a talking electronics site normally the led power meter is used to tune bugging devices to put out the peak power something like that,

but after i modified it it now charges nickel metal hydride batteries fast when used with the sec coil towers output i've only tested this a few times so more needs to be done yet since it worked on a bread board. the next circuit is the free energy from air circuit with have caps and another slightly modified led power meter with added afremnko plug and nmh battery. 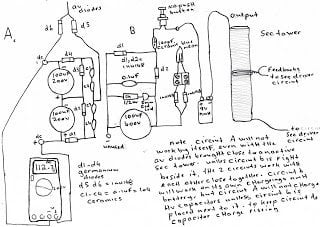 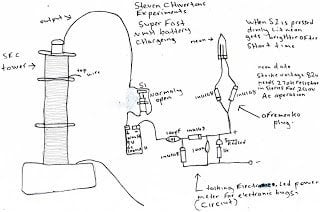