You are here: Home / Free Energy / Building a Sec Exciter – By Steven Chiverton

One of my friends who is an inventor, a mad scientist and an intense electronic enthusiast Mr. Steven Chiverton is always upto discovering and making intriguing electronic circuits and gadgets.

His outstanding efforts in the field of electronic is worth sharing and learning. After many months of disappearance, just a few days ago I received his email and without wasting anytime I requested him to update me with all his recent contribution to electronics and experiments. Let's learn what he had to say and what he was busy with for so long.

Discussing How to Build a Sec Excitor Coil

and i found your name here and there on the net and i left messages but it wouldn’t post and the email in them wouldn’t post either so you was untraceable, so this time i was finally lucky .

Anyhow i have so much to update you on my digital camera that i used to do close-ups is still just working despite battery lid not staying closed and its rechargeable batteries not lasting; long so ill see what i can do , due to the large sizes of my 2 best sec exciter towers its impossible to try get a close-up and get it all in

so i have some close ups of parts of it , hope some of these pictures will do ok one is the ac power 50 hertz switching relay the magic of this circuit makes the whole coil to produce more powerful in rf emissions ill email you more soon. and a few more of the triple sec coil tower , the limited amount of copper wire on rolls sold here at our closest electronics store enables me to wind only so much

so i wound them in series and put round pvc spacers to separate the series winds, each roll costs just over $6 but the thicker winds have more on the rolls than the thinner gauge wires, look at a transformer it has thicker primary on the outside and thinner secondary on the inside now look at what it dose if you use it in reverse mode, you are then stepping up the voltage so your using then the secondary as your primary to get a stepped up voltage out the other end the primary as you are using the transformers back to front

now look at my towers designed around the operating principles of the transformers i wound so many series sections of thinner gauge, which in a transformer it be the secondary and after the series winds of finer gauge i wound a series wind of thicker gauge wire, to a transformer this be a primary so with the driver circuit I’m powering it backwards like you do to a transformer to step up the voltage. 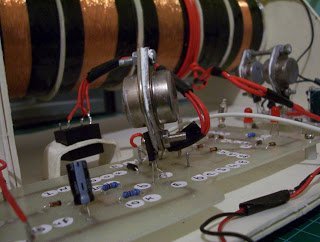 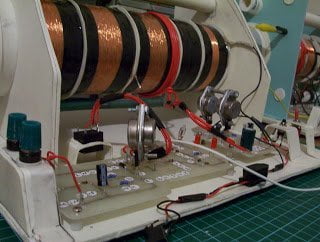 If you have questions feel free to ask Steven about it.... stevenchiverton(at)hotmail.com

so you still have a strange set up and this has yet to be explained better if can be but it helps in the stepping up of the rf currents in the coil and air waves you can bring one leg of a neon up to coil while holding the other and it will light up and via the body capacitance so somewhere between that and the air waves is the other energy to complete the circuit so it may be getting tapped into more of have its energy share stepped up to assist in the amazing way this all operates,

i cant find any better way to explain it , think of the neon lighting up when you have one leg in your fingers the other leg left floating like an antennae to suck in energy or ac rf energy so the other cycle to complete the energy sharing as to come from somewhere , its ac like rf energy so it has to be working like ac voltage and cycles in a hertz fashion 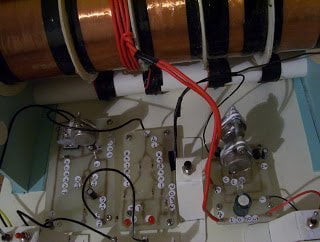 I’ve been building and experimenting with these special energy exciter things on the net sec exciter for short , and have come up with some great improvements and ideas you may be able to apply your skills to and further improve them more than what i could do.for a start i recycle pvc storm water pipes into a long sec tower, coil winder , and hand wounded my coils using it, then i watched the youtube videos on the sec exciters and saw one by jonny davro who in one video used a bd135 transistor and his interest is using as less voltage or current input to get more but after trying that using at first smaller transistors. 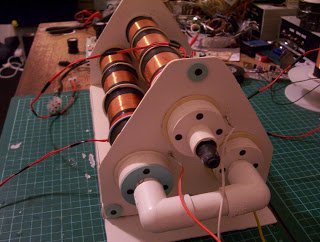 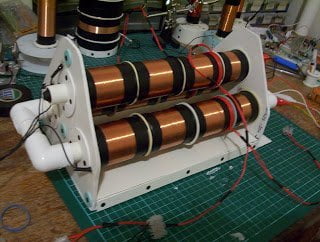 i realized they can’t handle the heat so the bd135 was better for it and i use more voltage and current than those on youtube did at the time so i used the bd135 and even the bd139 and i used a paralleled pair for more voltage handling and so on.

i improvised by using the metal transistor bodies as heatsinks and they work well for there thickness and heat absorbing and ive come up with some interesting circuit experiments using the energy output of these sec exciter towers, like digital rf tv jamming and fast ni-mh battery charging and the battery seemed to be recharging itself in some or one test after ive finished testing the circuit out on it and ive got a circuit that is a mixture of the afremenko plug diodes and a led power meter from another site

and some ideas i threw in that has some kind of rf coupling when placed side by side and charges up hv caps from the output energy of the sec tower its a long story but ill slowly update you soon and email you pictures. 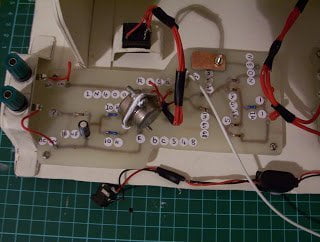 also ive been monitoring the airwaves with another gravity wave detector with a modification and in the area im in back with my partner in the same house as before im receiving all kinds of weird sounds and signals even what sounds like an electric train powering down and a steam whistle when the train line hear is not electric yet as they haven’t extended the electric train line from the other suburb to here yet so we don’t get electric trains this far, anyhow as for the steam whistle sound we don’t have a steam train here either last one was years ago and no longer running.

i think it may be these so called invisible alien crafts in our skies seen only with low light level cameras and there’s more to ive collected youtube videos and some feature a signal in the audio of there cameras prior to an alien sighting and ufo sighting these signals are identical to ones ive recorded from the other suburb we used to live in, through my other gravity wave detectors.

the first picture is a parallel bd135 transistor sec coil tower driver circuit i use to power mhy sec coil towers , if the conditions are right voltage coil design then the transistors will oscillate if not you can interrupt the base coil wire of the tower to kick start the transistors into oscillation . or you can use a spark from a hand held stove lighter to do it , it would be like a lightening triggered oscillator then. the 2 solder tube coils i made in the picture i was experimenting with them .

the next picture has 2 unconnected circuits placed side by side the one on the left is a free energy from air circuit from inventors 3 on the internet and the circuit on the right is a modified polarity indicator circuit that has only one input wire it runs to the sec towers output and will light the neon up bright and leds just from one wire running to the towers output , without this circuit placed next to the free energy from air circuit the hv caps in it wont charge up so even though they ain’t linked or joined there’s and energy sharing going on between them they work when close together , or you could call it a rf energy coupling of some kind 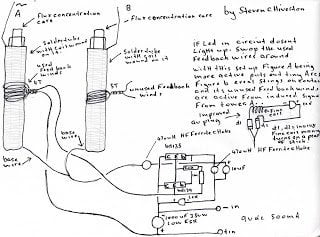 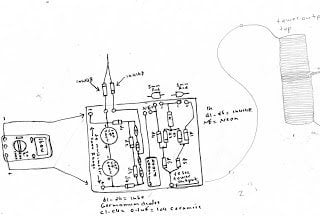 Importance and Usefulness of Sec Exciter Equipment, according to Steven Chiverton:

so the experiments i do and conduct will bread new ideas into the imagination of those who strive to create some kind of free energy with what they may learn from all this , like a i had a sore spot under the right side of the bridge of my nose its the second time i had it and i used the RF currents beside a parasite zapper to assist in riding the pain and it worked

and i also used the RF energy from the sec exciter to kill a tooth ache and it to worked so use your imagination that's how the world can benefit my friend, and the ideas of another like my ideas i have once been told were inspiring to someone.

so that made my day , anything extraordinary that may come out of it through experimentation you can be sure it would get covered up or other by the governments of the world but only time will tell i and have plenty of it .

swagatam anyone asks about what it can do for man kind , ask what could it do for the power hungry of the world if it yields something big out of all of it in the long run . i look for new things out of it and then document it then look for ideas it can be used for , some of the amazing discoveries over the century have also been made by accident

i improved it and added the other circuit to it, to make this beauty. some continuity testers with audio just cant check some circuits due to some things but this ones easy to use