The post explains a cheap yet effective method of desalinating large quantities of sea water into free drinking water at home. The idea was requested by Mr. Mike.

This is Mike Cardenas and am writing to you with reference to your invention of a Solar Water desalination set-up from 2011 which I came across. You will recollect attaching this diagram in that article:

I am part of a non-government organization which is a small Rotary Club that adopted a very poor and typhoon-prone, saltwater fishing village named Dolores in central Philippines with 2,000 people, no electricity and little fresh water recently ravaged by a supertyphoon.

We endeavored to rehabilitate their lives since the last major storm wiped out their means of livelihood by replacing their fishing boats and rebuilding their homes with sturdier materials.

They do need fresh water for drinking and even if they dig wells, the water they would get from those is still salty. After exploring commercial desalination using reverse osmosis, the costs are simply just prohibitive and they would be dependent on supply of those expensive membranes that need to be imported from Germany.

Always believed that nothing happens by accident and when I saw your invention, it gave me hope.

If the average person needs six liters of water daily, that community of 2,000 would need 12,000 liters daily. May I ask if you have performed calculations to determine the fresh water yields for an optimum sized desalination setup which you invented?

What they do have there is lots of sun and if produced in enough quantity, your invention should be able to address their fresh water needs.

After running through your website, also noticed that you focused on electric and electronic subjects. Quite impressive and, in fact, would like to personally participate in there myself. For now, I hope that you can spend some time with me on your invention and perhaps we can bring it to service these folks needs.

Your help and participation is truly appreciated. Thank you so much for your time and attention. Best personal regards.
Mike

You might have come across the other related article from this website, which presented a simple and an innovative approach for forcing a rapid sea water desalination process through solar heat, completely free of cost.

The idea utilized the advantage of a convex lens phenomenon under the sun which enables concentration of the sun energy over a small area, thus collecting substantial amounts of heat over the targeted area.

The idea made use of a cylindrical glass vessel filed with water in order to implement an inherent natural convex lens for the process.

However acquiring a cylindrical glass vessel and that too in large sizes can be extremely difficult for anybody who would be interested to have a go with the discussed concept.

The idea presented in this article exploits an identical principle for implementing a rapid sea water desalination but eliminates the need of the complicated cylindrical vessel.

As may be witnessed in the following layout image, here we employ the age old technique of a concave reflector device for executing the same. 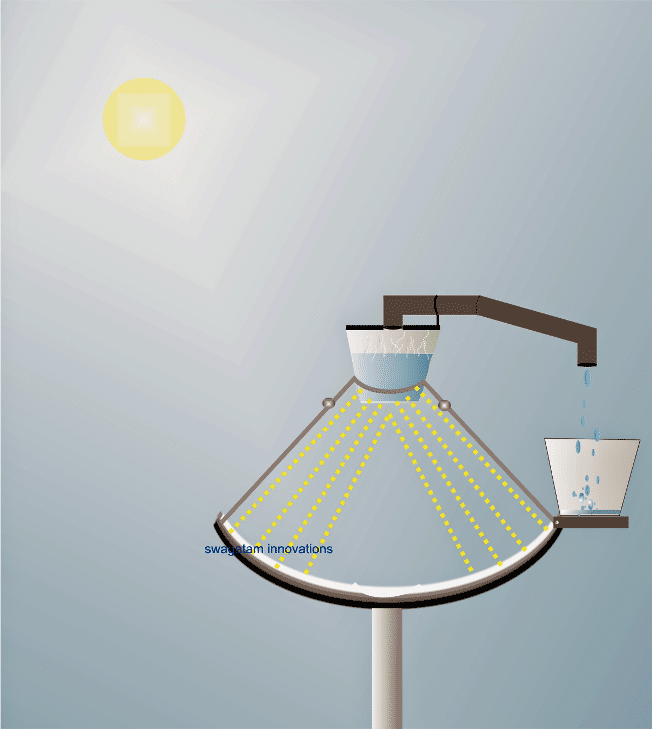 The set up may be understood as follows:

The concave lens is made by curving a polished steel or tin sheet at some calculated radius, and its focal point is noted with some trial and error.

A transparent bucket is clamped as shown in the figure right at the middle of the reflector where the focal point is supposed to be at the optimal level.

A transparent vessel is recommended to further speed up the heating process, since transparent quality helps to hold the long waves of the sun rays inside the vessel much better than an opaque vessel, which in turn results in greater heat retention, and vaporization of water.

The bucket can be seen having a lid with a PVC pipe glued over a hole at its center and terminating outwards towards the collecting vessel positioned a little below on the right side of the reflector assembly.

When this unit is placed in an open area under peak sunshine....the sun rays can be expected to be reflected back and focused sharply over the bucket filled with sea water.

Due to the intense heat concentration, the water inside the bucket may be expected to reach around 90 degrees Celsius temperature within 1/2 an hour, and the process of vaporization initialized.

Once this begins, the water may be expected to enter the PVC pipe and pass outwards and in the process cool down to form distilled water droplets, which might be seen dropping into the collector vessel positioned below the pipe opening.

How to make the reflector lens.

This does not need to be essentially circular or radial in shape. A rectangular polished tin sheet measuring around 7 by 3 feet, and appropriately curved as shown below might do the job quite effectively: 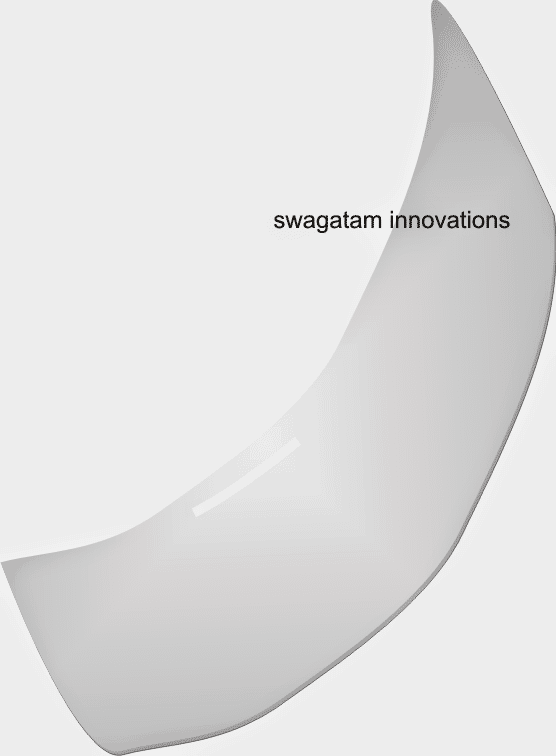 Just as sea water is strictly not recommended for drinking, distilled water too can be dangerous for our body, if not treated appropriately.

This is because distilled water is void of the essential minerals that a normal tap water possesses, which helps to keep the mineral content in our body balanced and prevents from getting washed away with the water.

Owing to this criterion, the above explained desalinated distilled water might need a manual treatment to restore the lost minerals in it.

This could be probably implemented by adding 1 part of sea water to 35 parts of distilled water, which might help revert the free desalinated water from sea water to acquire its original drinkable properties and become safe for drinking.

Thank you so much for your rapid response, Swag. Apologies for my delayed response. Saw your recent innovation to your previous idea.
Brilliant!

Way back in college, I saw my professor work on a solar water heater mack-up using a concave reflector made of reflective sheet metal on a steel frame about ten meters long and a meter wide but its sole purpose was heating up water in a tube.

Never really did get involved in it and sadly the man passed away a while back. However the fabrication of a parabolic shaped concave reflector (and its daily cleaning) and manual handling of receptacles is well within the parameters of that fishing town.

May I pick your wonderful brains some more, please? Taking the cue from your guidance, instead of my professors ten meter tube to make hot water, the creation of an array of individual receptacles made of glass (that won't easily crack due to heat, of course) boiling seawater into steam then collecting its fresh water condensate in a detachable bucket would also address individual distribution requirements.

And while it may be labor intensive, there are many hands who could participate within that fishing village.

The optimum size of that bucket should be a function of the amount of steam that can be condensed into liquid which can be collected on a sunny day.

The optimum volume of the glass container feeding the pail should be a bit more than what can be turned into steam so that the remaining highly saline water can be easily disposed of so that no additional work need be performed scraping off salt from a very dry glass receptacle.

Don't expect that you have worked on metrics for this invention just yet so I will perform some rough calculations and would very much appreciate your reviewing them before my performing an experiment to verify the numbers. Will need to brush up a bit but am targeting to have those ready for your review this coming weekend.

Truly appreciate very much your coming to my rescue. Looking forward making this into a reality and take care of that fishing village. And possibly more. Have a great week ahead and best personal regards.

How to Make a Parabolic reflector using a tin sheet and a few nut/bolts:

A parabolic or a conical reflector would be more effective since here heat would be allowed to concentrate from all the corners into one spot.

The following image shows the steps required to make a cheap parabolic or a conical reflector with a piece of shiny tin or steel sheet: