The post explains the making of a parallel path overunity device through a few magnets and coils.

What is Parallel Path Technology

Parallel path technology was first introduced by Mr. Joe Flynn and it's also called the Flynn's concept. In this concept or theory, a relatively weaker electromagnetic influence is used for aligning the magnetic fields of a few permanent magnets over a particular point enabling a massive force to generate over that particular side of the unit.

We know a lot about permanent magnets, and have seen how these natural power devices are able to stick or cling over ferromagnetic surfaces due to their inherent force of magnetic attraction.

However this property of magnets no matter how strong it may be have proved useless as far as the creation of perpetual energy is concerned or for devising overunity machines.

Very interestingly, Mr. Joe Flynn could devise a method through which it became possible to channelize the magnetic force of permanent magnets on particular directions with the help of a relatively smaller calculated electricity input.

The following paragraph explains the making of a parallel path over-unity device using ordinary electrical elements and a circuit:

Parallel path as the name suggests makes use of two parallel ferromagnetic plates arranged as shown in the following figure:

We can see a couple of horizontal plates sandwiching two permanent magnets between them at the ends.

Two vertical plates can also be seen positioned across the ends of the horizontal plates.

And the central vacant section of the horizontal plates possess coils of wire around them which are interconnected with each other and terminated for accepting an electrical potential or voltage.

Without any electricity applied to the coils, the vertical plates are subjected with a magnetic force of attraction that may be equal to the strength of the fields of the enclosed permanent magnets.

We can assume it to be unit 1 since the force is the fundamental force of attraction from the magnets and are equal on both the sides of the system.

Applying Electricity to the Assembly

Now, if a calculated magnitude of electricity is applied to the central coils, an amazing phenomenon could be seen happening, which is of course not so amazing rather more scientific and seems to be obeying the standard laws of magnetism........ yet you would find it very impressive.

Depending on the polarity of the applied electricity, the magnetic lines of fluxes get aligned and neutralized on the particular sides of the plates respectively, generating a massive accumulation of magnetic force on one particular side, and zero force on the opposite side.

The above situation gets reversed as soon as the polarity of the electricity is reversed, as shown in the following figures. 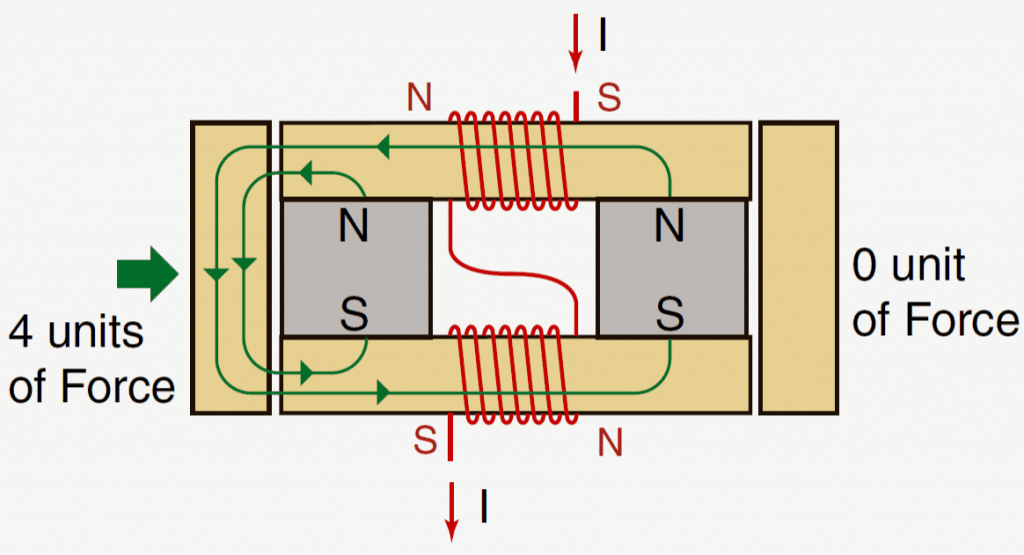 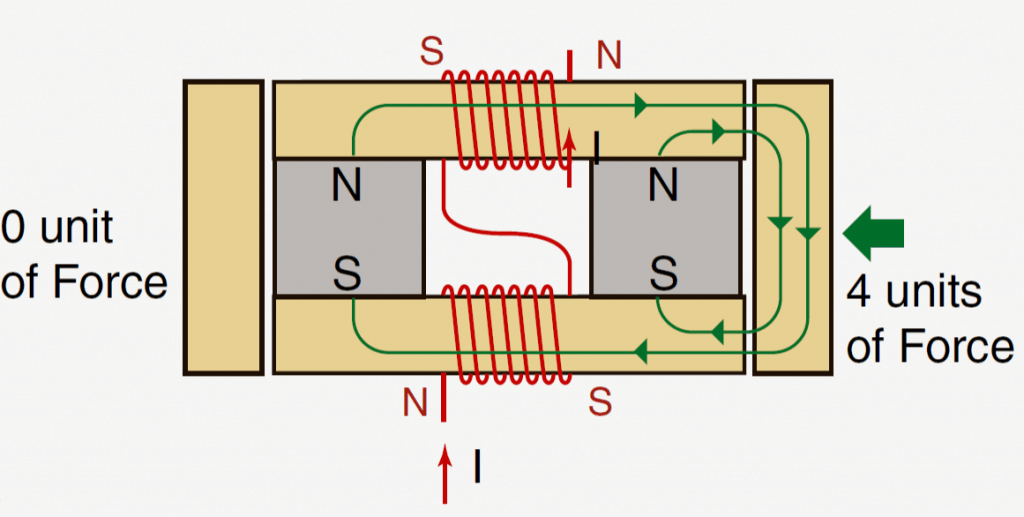 The most impressive and intriguing fact regarding the above implementation is the magnitude of force that is being achieved on the opposite sides, as shown in the above diagram it's 4 units on one side and zero on the other side.

It's proved that it takes the electric power of just 1 unit, that refers to the magnetic power of one enclosed magnet, to create the indicated 4 units of force.

Since the above actions can be flipped across the sides simply by flipping the polarity of the input electricity, we could be able to enforce the actions into a practical motion or a linear motion through some suitable mechanism, which would respond with 4 times more force than the conventional electromagnet operated devices.

The above theory looks absolutely feasible and have been tried out successfully by many enthusiasts.

Presently it's being tried for creating super efficient airplane motors.

Actually the applications could be diverse, it just needs an innovative smart approach for converting this concept into something which normally nobody would want to discuss openly...yes it's the overunity results which can be implemented using this theory, which looks quite obvious from the above theory.

If you have already made a parallel path device in your home, do let us know about its overunity results and additional benefits achieved through its specific applications

We use cookies for delivering the best experience to your search results. By using this site you give your consent to this.. OkPrivacy policy