The post explains a battery backup time indicator circuit for monitoring the battery power usage by the connected load and for estimating the approximate remaining backup time of the battery. The idea was requested by Mr. Mehran Manzoor.

A 7 segment LED display could make the circuit quite complex, therefore we'll try to implement the design using 4 LED indicators, which can be easily upgraded to 8 LEDs by adding another LM324 comparator stage

Whenever a battery operation is involved for operating a given load, knowing the backup time of the battery becomes an important factor with the system.

However a backup time indicator is mostly never provided even in most of the advanced battery charger units, which makes it impossible for the user to realize the remaining backup power within the associated battery. With such difficult circumstance the user is just left to guess the full discharge time through trial and error methods.

The design of a battery backup time indicator circuit presented here is designed for fulfilling the above requirement so that the user is able to visually monitor the backup time as well as the consumption status of the load connected with the battery continuously. 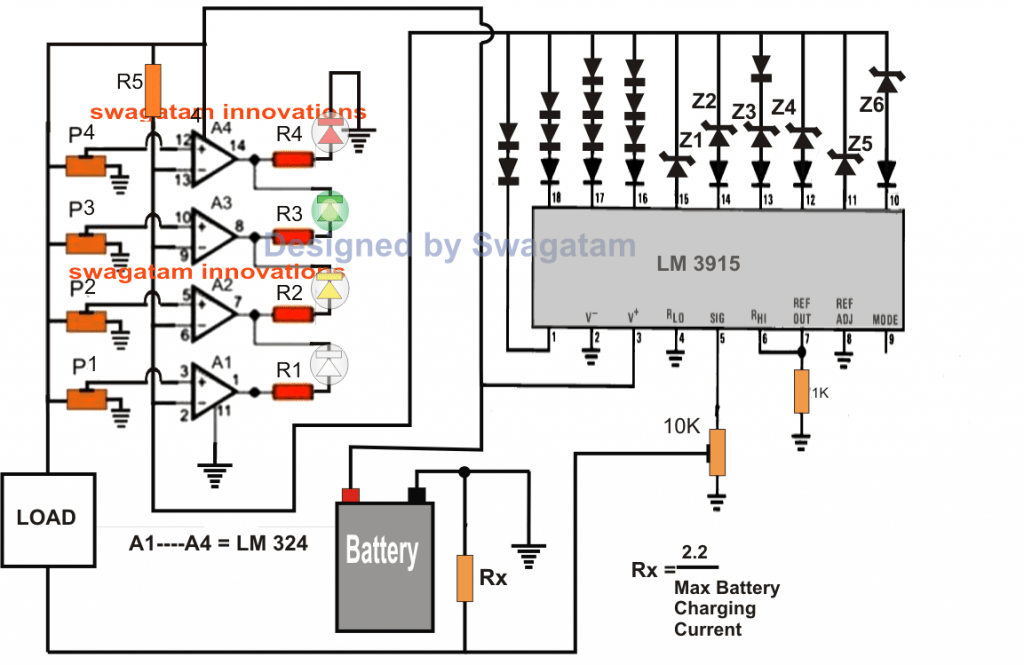 Referring to the diagram above, we can see the design comprising of a couple of stages for the proposed implementation.

The left side of the design consists of a 4 LED battery status indicator circuit using the opamp LM324, while the right hand side is configured around the IC LM3915 which is a sequential LED dot/bar mode driver IC.

This implies that at 14V which is the full charge level of a 12V battery at which all the LEDs can be expected to stay illuminated.

Setting up the Presets

The above setting up of the presets is done with reference to a voltage level achieved in a situation where pin#1 of the LM3915 is in the activated state.

Pin#1 is the first output pin of the IC LM3915 which is set in the active state with reference to a minimum voltage at its pin#5, which means that if the pin#5 voltage is increased the sequence of activation is correspondingly shifted from pin#1 to the next pin#18, and then to pin#17, and so on until  finally to pin#10 which is last pinout of the IC, signifying the maximum voltage detection range reached at pin#5.

The above actions activate a varying (increasing) reference level from pin#1 to pin#10 due to the series connected diodes and the zener diodes which are appropriately selected for generating a correspondingly increasing voltage drops across the indicated pinouts. These voltage drops can be expected to be between 0.6V and 5.7V across pin#1 to pin#10 respectively.

During the course of the above sequence,the pinout activation jumps from one pin to the next, which means only one pinout stays active at any instant of the detection (make sure pin#9 is unconnected or open for this condition)

Pin#5 can be seen attached with Rx which is a current sensing resistor which is connected in series with the load negative and the battery negative.

Depending on the load consumption, one of the corresponding output pins of the LM3915 becomes active (logic low), which in turn sets the instantaneous reference voltage level for all the LM324 opamp inverting pins

The LEDs connected with the opamp light up by comparing the volatge of the battery with refernce to the load current, that is with refernce level info achieved to the LM3915 output pin activation.

This helps the opamps to roughly calculate the estimated power of the battery with respect to the usage by the load and indicate the same through the LED illuminations.

And on the contrary if the load consumes minimal power, the opamps are able to acquire a relatively lower reference voltage level from the LM3915 output pin indicating higher battery backup time left, through the illumination of the relevant LEDs.

How to set up the Circuit

Rx is selected such that the pin#1 of the IC LM3915 becomes active (logic low) at minimal voltage level across Rx, this may be done by attaching a relatively low power dummy load for the load.

The 10K preset associated with pin#5 of the LM3915 may be used for fine tuning the above results.

Next, the higher range can be selected by connecting a load rated to consume a higher current or equivalent to the maximum safe discharging limit of the battery.

Now the 10K preset may be adjusted to make sure that with the above load pin#10 of the IC becomes active (logic low). This setting could affect the earlier setting, therefore some further tuning may be required until a intermediate favorable condition is reached with the results.

The presets of the LM324 may be adjusted as explained earlier in the article, it's simply done with a reference acquired from pin#1 of IC LM3915 and by setting the A1 to A4 presets as per the explanation given in the above sections of the article.

Rest of the info is given in the diagram.