The following article explaining a dual battery changeover relay circuit was requested by Mr.Raja so that it could become possible to switch between his old and new inverter batteries automatically, eliminating manual interventions. Let's read it in details.

I had another  12v 110ah battery which is about 8year old. ( which is connected earlier in the same lighting system in my house itself) . But the old one has approximately 25ah capacity as i calculated.

But it is not sufficient to glow light for about 5 hours of night.(i.e. From 6pm to 11pm) So i want to use old and new Battery. But i can't join them in parallel, as old one may takes charge from new battery, which decrease the life of new one (as i think)

Now , please give me the circuit to switch on and off between two batteries in such a way that, initially lighting system operates with old bty and as the voltage of old bty decreases (below 11.5v) then only switch on to new one.. Thanking you"

Referring to the circuit diagram we see a  IC 4017 which functions as a sequence toggler or switcher.

The IC will shift its output from pin#3 to pin#2 and then to pin#4 in response to every positive pulse at its input pin#14.

pin#4 of the IC has been connected to the reset pin#15 of the IC, means the moment the logic sequence reaches pin#4, the sequence gets reset back to pin#3 so that the cycle can repeat.

Here the input pulse is derived from the low battery warning indicator from the existing inverter system.

The LED light from the low battery warning has been integrated to an LDR using a light proof tubing.

Initially when the power is switched ON, the 1uF capacitor resets the IC so that the logic sequence initiates from pin#3.

The relay at this point remains connected with its N/C pole connecting the old battery positive with the inverter.

On reaching the low battery threshold, the inverter low battery LED illuminates which instantly lowers the enclosed LDR resistance supplying a positive pulse to the pin#14 of the IC.

The IC responds shifting the logic sequence from pin#3 to pin#2.

Since pin#2 of the IC is connected to the relay driver transistor, the relay immediately activates, switching the  new battery into action through its N/O contacts.

The new battery being fully charged toggles OFF the low battery indicator light, the IC goes into a standby position holding the situation intact.... until, the new battery also reaches a low-battery condition switching ON the LED and resetting the IC into its initial position. 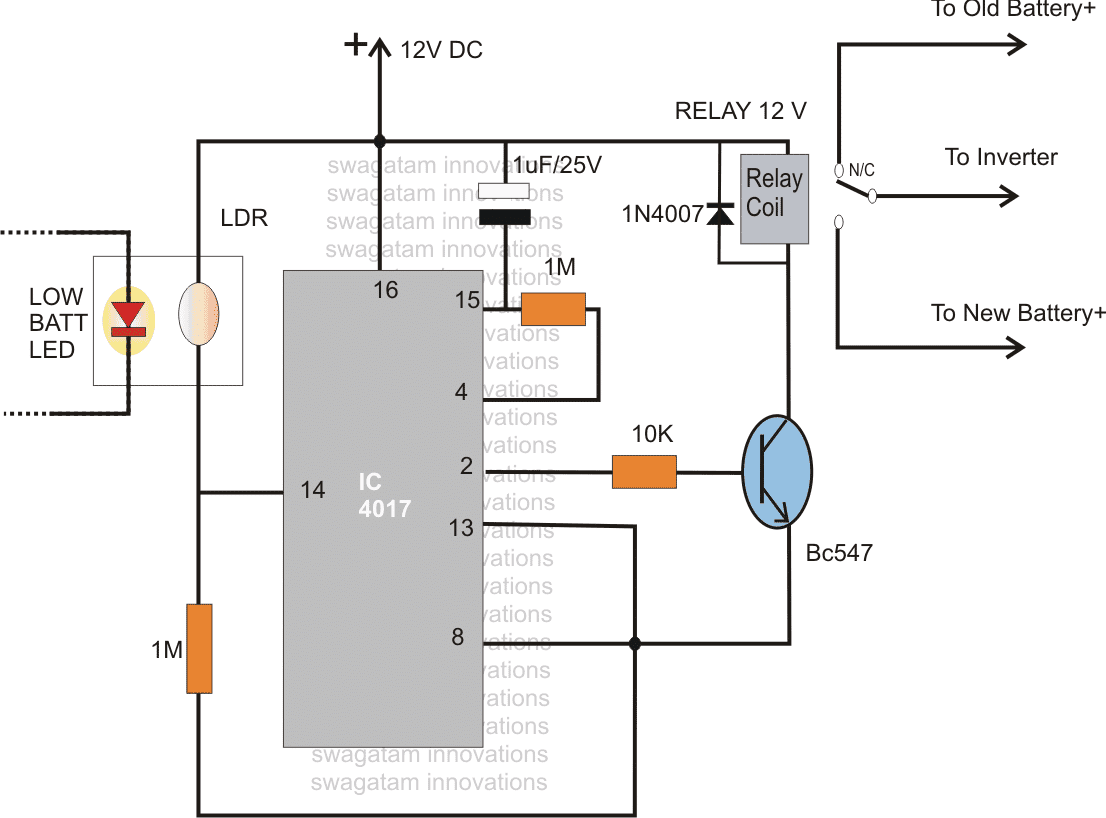