The article discusses a simple battery health checker circuit which uses ordinary components for enabling the user to get an instant reading of the battery efficiency or regarding its effective discharge rate. The idea was requested by Mr. Shrishail.

In one of the previous posts we learned regarding the significance of internal resistance of battery and realized how this parameter affects the efficiency of a battery in terms of its charging rate, and discharging rate.

The internal resistance of a battery ultimately decides how much current the battery may be allowed to accumulate, retain efficiently and discharge at the same efficient rate to the load.

Higher internal resistance would make the battery lower with its efficiency and vice versa.

Therefore the health of a battery can be evaluated by correctly and quickly judging the average internal resistance of the battery, but since this method may not be easy to detect using ordinary methods, an alternative way of determining the health of a battery is to capture the instantaneous amount of current it's able to retain, and deliver through a quick discharging method.

This procedure is devised by me, although I am not sure whether or not this would be helpful enough in determining or checking the health of a battery quickly. 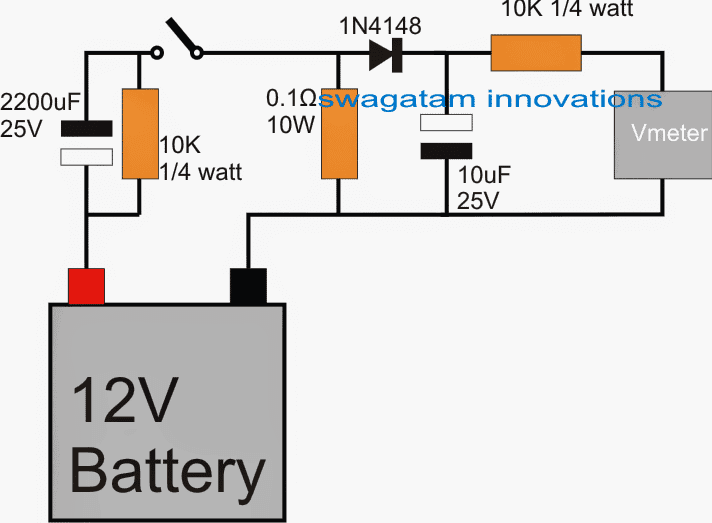 The diagram shows the proposed battery health checker circuit using very ordinary components and the set up hopefully can be used for determining the battery's overall condition by pressing ON the switch.

First the battery is charged to an optimal extent, this procedure cannot be avoided because unless the battery is properly charged the level of current it has retained cannot determined.

Hence after the battery is optimally charged using any ordinary high current battery charger, the above shown circuit set up can be attached with the battery for getting a rough idea regarding its AH efficiency specs.

The circuit is supposed to function in the following manner:

As soon as the indicated switch is pressed, the battery is subjected to an instantaneous short circuit condition via the 2200uF capacitor and the 0.1 ohm resistor.

This equivalent amount of voltage which is supposed to be the direct measure of the battery's AH efficiency level gets stored in the 10uF/25v capacitor and can be measured or read over any suitable digital voltmeter across the selected range.

By performing a few repeated tests through the above method, and by assessing the corresponding voltage levels across the 10uF capacitor, an overall health of the connected battery can be estimated and checked.

The values of the 0.1 ohm resistor may vary according to the AH of the battery, and must be selected appropriately such that a measurable reading is achieved over the selected range of the V meter.