The post presents an SMPS based LED street lamp driver circuit which can be used for driving any LED lamp design right from 10 watts to 50 watts plus.

The chip implements the said quasi-resonant function by sensing the demagnetization of the transformer and by subsequently switching the mosfet for further actions.

A feed forward feature enables the IC to compensate for the variations of the mains voltage which in turn takes care of the converters power handling capability.

In case the connected load is lower than the specified magnitude, the device correspondingly adjusts and compensates the operating frequency without affecting the ZVS feature by much.

In addition to the above features the IC also includes a built-in current sensor, an error amplifier with accurate reference voltage and a versatile two step protection against overcurrent load conditions.

More details regarding the IC L6565 can be found in its datasheet.

The remaining configuration of the converter is standard and may be understood as follows:

The rectified voltage is filtered by C1 and applied to the primary section of the converter which comprises the IC L6565 along with the ferrite transformer primary winding and the switching mosfet.

The IC instantly triggers itself and the mosfet, implementing the featured ZVS operations and switching the mosfet at the specified compensated rate, depending upon the mains input level.

The output of the transformer responds to this and generates the required voltages across the respective winding.

The outputs are appropriately rectified and filtered by the connected fast recovery diodes and high voltage filter capacitors.

Other auxiliary winding which are included produce 14V (@1amp) and 5V (@50mA) which may be used for other relevant applications such as charging a battery or illuminating a pilot lamp.

The opto IC3 is as usual included for ensuring a constant output in terms of voltage, current and for providing the relevant output information to the chip so that the necessary protective actions can be enforced by the chip during adverse situations.

The transformer winding details for the proposed 50 watt street light driver circuit is furnished in the diagram itself. 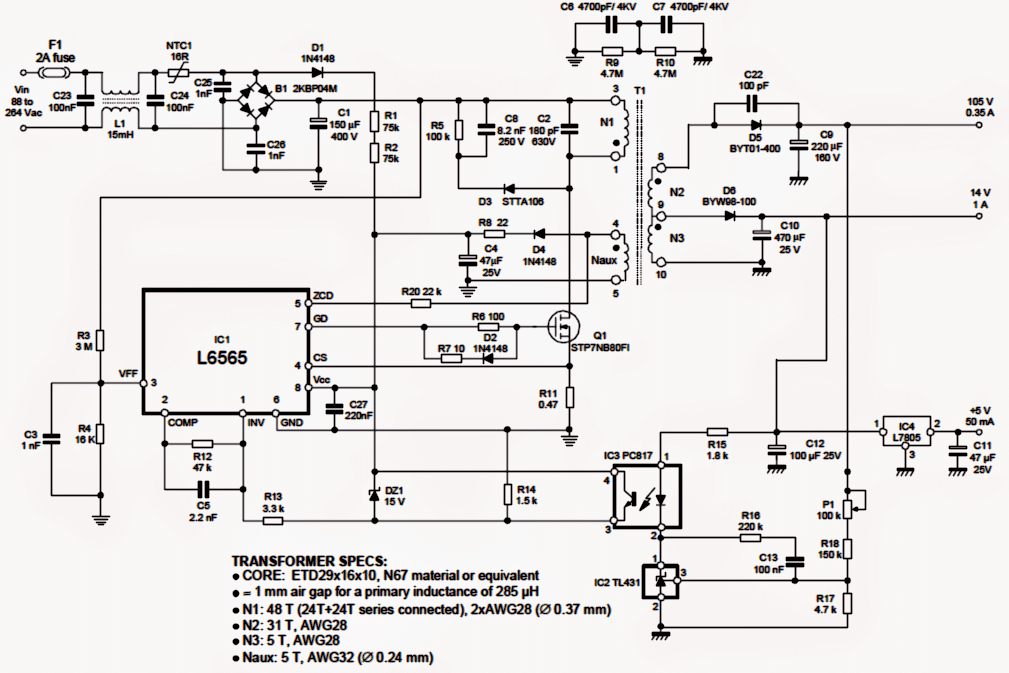 In the above sections we learned an SMPS design which can be used for driving a 50 watt LED lamp made from 50 numbers of 1 watt LEds. Here we try to understand the connection details of the LEDs with the driver circuit.

Assuming we want to use 1 watt LEDs (recommended) for the proposed 50 watt street light, we would require 50 numbers of these LEDs to be configured with the circuit.

Referring to the above descriptions, we see that one of the outputs is specified with 105V at 350mA.
This particular output becomes the preferable one for driving 50 numbers of 1 watt LEds, although it could be implemented only after through some serious calculations.

If we connect all the 50 LEDs in parallel would call for an output equal to 50 x 3.3 = 165V, but since this output doesn't seem to be available, we could opt for a more feasible series/parallel connection with the LeDs.

The above values once again seem to be not matching the driver output specs.

No issues, the above values can be matched by doing a few simple tweaks with the relevant output winding of the driver transformer.

The current (amps) can be increased by replacing the N2 winding with a bifilar winding consisting of two 28AWG wires wound simultaneously.

This will take care of the required 700mA current since now we have used two wires in parallel for N2 instead of the recommended single wire.

Next, for reducing the voltage from 105v to 82.5V, we simply need the above winding to be made into 24 turns instead of the indicated 31 turns.

That's it, once the above couple of simple tweaks are done, the driver now becomes perfectly suitable for driving the proposed 50 watt LED lamp module.

The LED connection details can be witnessed in the following schematic diagram: