The TV transmitter circuit presented in this post incorporates the European standard FM frequency for audio and Video up-links.

Referring to the circuit below, Q1 is configured as a preamplifier for amplifying the audio input to be modulated.

Q2 is fundamentally responsible for conducting a couple of important functions: It amplifies the carrier frequency generated by the tank circuit, and also modulates the input over this carrier waves.

The preamplified audio signals from the Q1 stage is fed to the Q2 stage at its base for the intended modulation actions.

As we know all transmitter circuits require a conventional "tank" circuit involving an inductor and few capacitors for generating carrier waves.Here too a tank circuit becomes imperative and is formed by the insertion of C5, L1. This network essentially generates the crucial carrier waves.

The video signal which needs to be superimposed with the audio signal is applied to the emitter of Q2 through the variable resistor R7 for implementing the intended modulation process.

The composite signal (audio/video) after modulation via the Q2 and the tank circuit stages is further applied to the connected antenna A1 for the final transmission into the atmosphere so that it can be received by a particular TV set in the vicinity.

The proposed TV transmitter circuit requires a well regulated stabilized 12V supply for operating.
Preferably a 12v battery would give better results due to a much cleaner DC free from all possible ripples and noises. 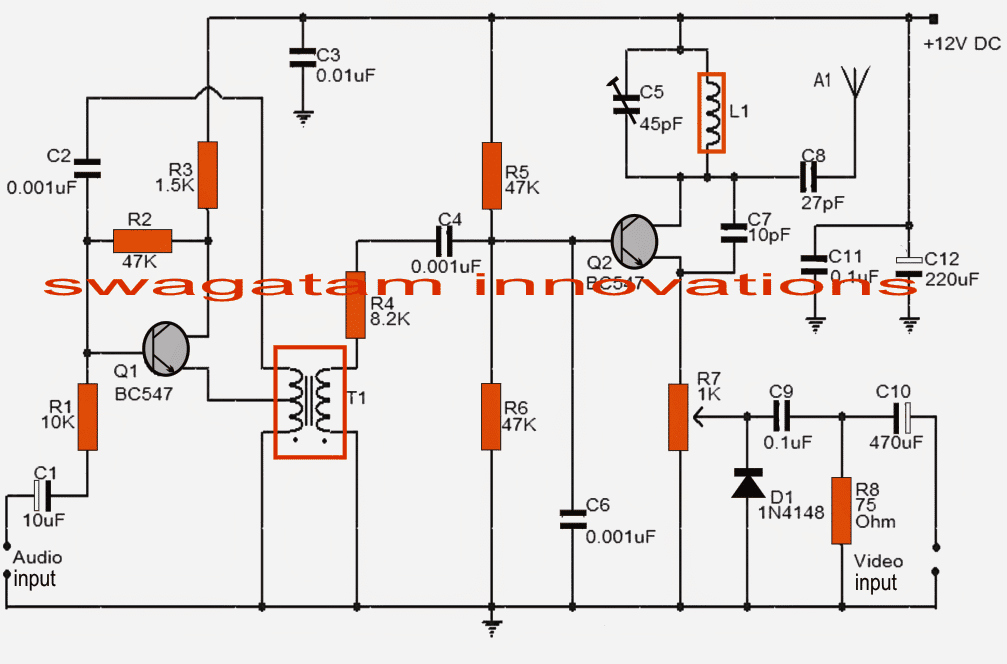 Things you need to consider while building this TV transmitter circuit at home:

Preferably use a well designed glass epoxy PCB for this project.