In this article we are going to learn about a peak detector circuit, its working principle and how to implement it in clap operated circuits for illuminating an LED in response to clap sounds.

What is Peak Detector

There are many ways to do this and often used in many fields in electronics where rapid measurement is not viable.

Similarly, there are many situations in electronics, where we may need to measure peak signals.

Here, we are going to see simple peak detector circuit that consists of one diode, one capacitor and one resistor.

The diode permits the current in one direction, which is to charge the capacitor.

When the input drops the capacitor holds the value for a short period which gives some time to measure the peak. Here the short period could be ranging from a few milliseconds to a few seconds.

The values need to be refreshed time to time so that new values can be stored. To do this we need to discharge the capacitor. A bleed resistor is connected parallel to capacitor which discharges.

The capacitor discharge time can be calculated by the following formula:

Where, T is time in seconds

C is capacitance in Farad

R is resistance in Ohm

Here, we will implement the peak detector in a clap sensor circuit. This circuit responds to loud busts of sound such as clap.

There are three stages in this circuit, the microphone amplifier, peak detector and op-amp circuit that detects peak.

The sound gets converted to electrical signal by the microphone, gets amplified by op-amp. The amplified signal enters the peak detector circuit and charges the capacitor. The peak value stored in the capacitor becomes the peak input minus 0.7V for silicon diodes, since there will be always voltage drop across diode. 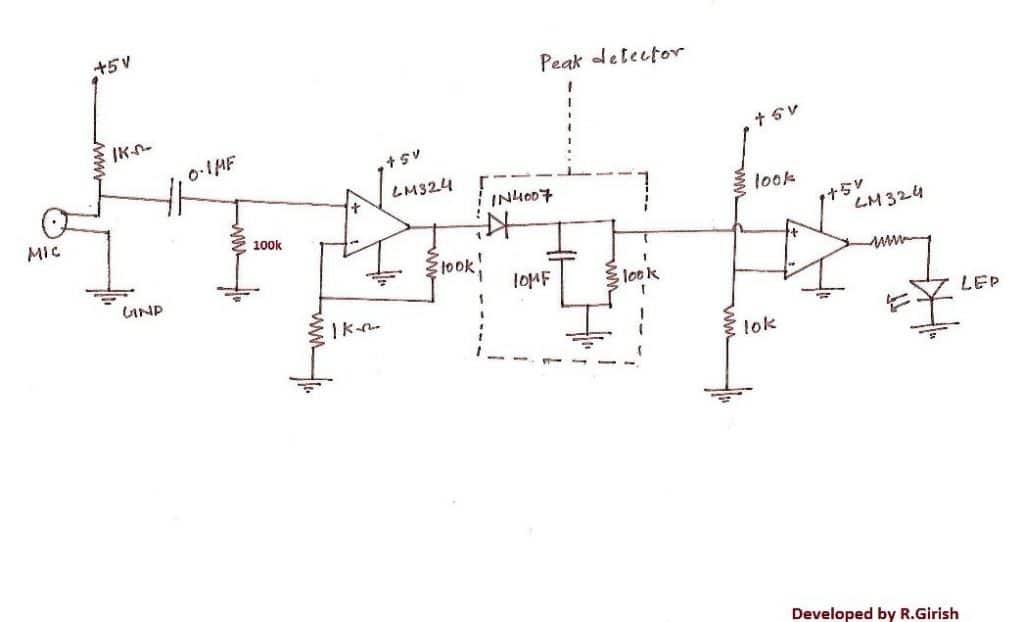 The value stored in the capacitor gets recognized by op-amp comparator circuit.

As soon as the peak value goes above reference voltage the LED turns ON.

As soon as the capacitor is discharged below reference voltage the LED turns OFF.

So, what was the role of peak detector in this circuit? Well, it holds the clap signal for few 100 milliseconds which helped the LED to stay illuminated for a few 100 milliseconds. If you wish LED to light longer, it can be done by incrementing capacitance and resistor values.