Pets and kids (under 4) have one thing in common, they are curious by nature and love venturing into unknown zones ending up in some sort of mess or trouble. Pet or kid tracker equipment which are quite similar to a key finder circuit were specifically designed for solving this issue, here we learn how these work and how to build one at home. The idea was requested by Mr. Akmar.

thank you for posting this article..:) I really like it.

For your information, I want to build an object finder (ex:key finder) similar to this circuit and I will modify it a bit sing 433MHz RF modules..the idea is when the receiver receives signal from the transmitter, it can produce sound if it detects the object..

if possible, can I substitute the load with a buzzer? thank you and I hope you can help me with this.
Akmar

The requested application of a keyfinder is similar to what we normally do when one of our cell phones become untraceable in our home, we then resort to calling it through another phone so that it rings and identifies its location.

However when it comes to some other equally important item such as a key which has no calling feature to respond, locating it becomes hugely difficult and frustrating.

A simple remedy for this may be to attach some kind of a wireless device to the key chain so that whenever a misplacement of the thing occurs, the owner is able to quickly find it by connecting it through a matching transmitting handset.

The handset transmits the matching frequency forcing the attached key receiver to beep or produce the programmed sound for identifying itself.

The above concept may be also applied for tracking or monitoring purpose, for example on pets or small kids. Here the transmitting device could be attached to the member so that whenever the member tends to move out of a predetermined safe premise, the owner or the parent is instantly notified about it through an  alarm over a nearby or a pocket receiving device

Keeping a continuous watch over these elements may not be always feasible for all and therefore resorting to some kind of hi-fi device becomes a favorite alternative.

Below we see two diagrams which can be tried for the proposed pet finder or tracker and also for monitoring and restricting kids in parks or in building safe premise.

The heart of the circuits are the standard 315MHz RF modules that come in compatible packages as Tx/encoder and Rx/decoder.

The first diagram shows a Tx (transmitter) and its encoder module. The HT12E is the encoder chip while the upper small chip is the RF transmitter.

The function of the Tx chip is to generate the 315 MHz carrier signals and modulate it with the applied digital or an analogue data via its relevant pinouts.

This data must first go through a processing phase in order to make the data recognizable to the Tx chip. The digital or analogue input could be from an external source such as a PC USB, a sensor device or simply from an oscillator as used here.

The data is fed to one of the inputs of the encoder (since we have four inputs/outputs for this model, we may choose any one of these for the intended actions).

The diagram shows D0 being used as the input for the data feed, the data feed here is nothing but an ordinary square wave oscillator using a standard transistorized oscillator circuit consisting of Q1, Q2 and the associated parts.

The frequency from the astable constantly switches the encoder which in turn processes this signal and feeds it to the data input of the Tx.

Tx now makes sure that this data rides over the 315MHz carries and is transmitted into the atmosphere for enabling the Rx module in the vicinity to capture and reprocess these signals into the required tracking info.

An oscillating frequency is used as the trigger instead of a fixed switching to minimize current consumption of the Tx unit and ensure a much longer battery life.

The battery here could be a small 3V button cell, the entire circuit could be built using SMD to make the configuration as small as possible. 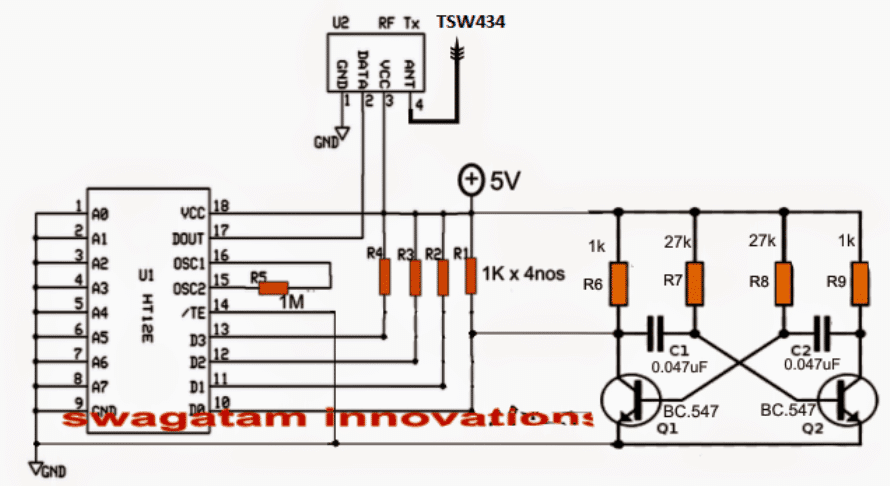 The above system would be rather incomplete if it's not complemented by an Rx (receiver) circuit. The following circuit highlights the receiver system which works exactly in the same way as its Tx counterpart but in an opposite manner.

Here, the Rx chip is stationed for capturing the data sent by the Tx module. The captured data is mingled with the 315MHz carrier waves and is in an encoded form, therefore it must go through a reprocessing, which is done by the HT12D chip via its pin14 (data feed).

The processed signal is anticipated across the relevant output pin of the decoder and terminated to produce a high or a low logic signal or as per the original data content.

In the discussed pet finder/tracker or the key finder circuit we have used D0 as the I/O pins for both the modules, therefore in the following Rx module we find D0 being hooked up with an external transistor buzzer driver stage.

The processed square wave output at D0 is now used for triggering the first BC557 transistor, which responds to these signals by staying continuously ON due to the inclusion of the base 330 ohm resistor and the filter capacitor 4.7uF stabilizing components.

As long as the first PNP stays ON, the second PNP is restrained from activating and keeps shut off but only for so long as the Tx module is within the transmitting range.

Once the Tx module which may be fixed on the kid or the pet drifts out of the predetermined safe zone, the RX module is inhibited from the signals. When this happens the second PNP gets a chance to trigger ON activating the attached buzzer.

The alarm sound instantly notifies the owner or the parent regarding the situation. 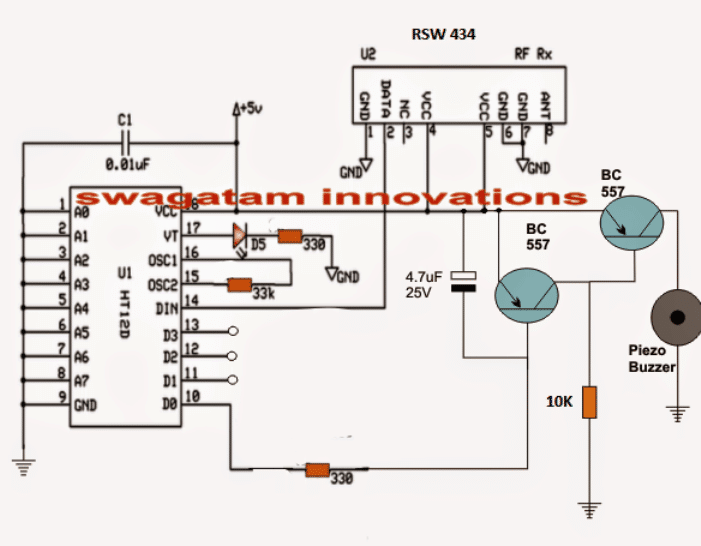 In order to use the above circuit as a key finder, the right side BC557 will need to be removed and the buzzer replaced with the shown collector resistor of the left BC557.

Also Tx circuit will now need a switch for the required toggling and detection of a buzzing sound from the above Rx attached key circuit.