The post explains an office call bell network circuit for office complexes which could be used for calling and monitoring office member's attendance and response from the particular intended office chamber. The idea was requested by Mr. Rajib Banerjee

Need a perfect useable circuit idea for Ringing the Bell as different Department of the office from single point.
Say, 20 department calling system from a central office.

When push the switch for 'x' department then an existing electrical calling bell is ringing till anyone from that department come to attending to the central office and it's time taking to attend because of distance to each other.

Now need a circuit which work like when calling the Bell from Central office to any dept, the attendant who attend the central office just push switch from that dept.

for the signal that he/she is hearing the bell and just coming. After pushing the switch from Dept a light glow besides the calling switch of Central office. just this which i can incorporate with the existing using one way calling system and give me the alteration as diagram.

The proposed office call bell circuit as requested above may be summarized as follows:

The central head office needs to be connected to each of the office departments such that pressing the respective push  buttons rings the corresponding bell in the desired office chamber.

In an event the concerned office member is not in the "called" office, but in some other nearby department and hears the ringing, is able to respond by attending the "answer button" from the other office the member may be situated during that instant.

The above response gets stored in the form a glowing LED in the head office allowing the attendant there to check the concerned members exact position.

The circuit implementation of the proposed office call bell monitor network can be done by using a group of set/reset flipflops as may be witnessed in the following diagram: 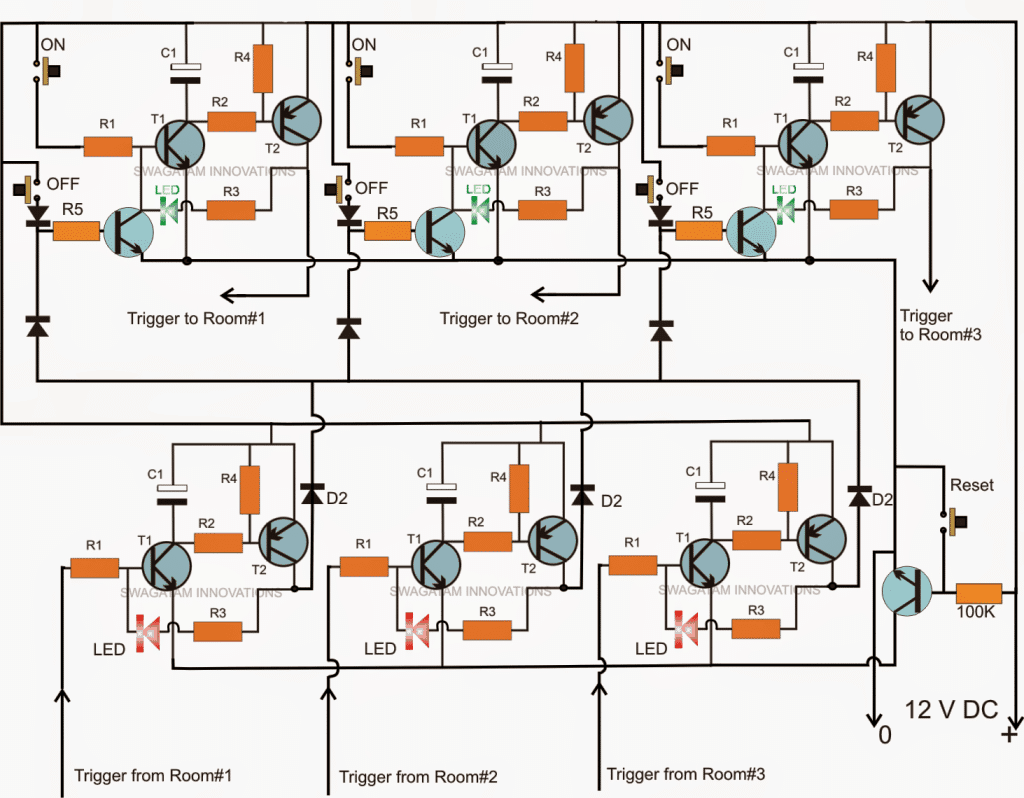 The circuit above illustrates an example wiring for three office rooms which may be extended to any desired numbers simply replicating the stages.

As can be seen the upper section comprises three identical stages of transistor set/reset modules, each module being made up of two NPN transistors, one PNP, a couple push buttons and a few resistors.

The push button marked as "ON" is used for activating or triggering the latch circuit made up of T1 and T2. The OFF button does the opposite that is deactivates the particular module activation.

When activated a positive voltage becomes available at the collector the corresponding PNP transistor which is terminated for triggering the office bell situated at the particular office, in the diagram these are labelled as "Trigger to room#1, room#2, room#3...."

When one of these triggers is activated it's conveyed to a relay driver circuit system installed in the intended office chamber where the trigger is fed to the base of the relay driver transistor as shown in the diagram below (labelled as "trigger from head office").

This prompts the relay to get activated and also the connected bell across the relay contacts.

The member now presses the green switch in response which is conveyed back to the head office and collected across one of the inputs marked "trigger from room#1, room#2 room#3..." depending upon from where the member may have attended the green button. This action enables an instant switching off of the bell.

The red LED illumination may be reset and restored to its switched OFF position by pressing the reset button at the extreme right corner of the above head office call bell monitor circuit above. 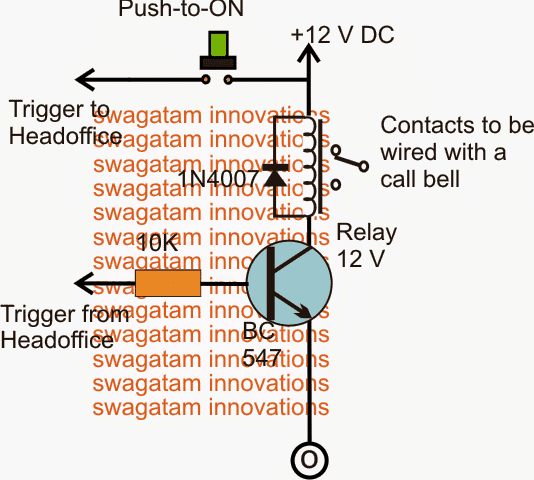