The post explains an innovative circuit modification which allows a single common lamp to be used as a parking light, turn signal indicator light, as well as a side marker light on the relevant positions. The idea was requested by Mr. Chris

I have a project that is slightly related to this one and could use your help.

I have 2 single filament bulbs that I would like to use as parking lights as well as turn signals.

They would be wired to stay on anytime the car is running, and each light would turn off and on when the corresponding turn signal is activated.

The side markers will not be lit unless the parking lights are on, but I do still want them to flash anytime the turn signals are activated. I prefer not to use led's as my project is striving for a retro look, but I might if it's not possible with the incandescent bulbs.

According to the first requirement a single lamp needs to perform the dual function of a turn signal lamp as well as a park light, also the lamp should switch ON as soon as the turn signal switch is turned ON.

When the park light is in switched ON position, the TIP122 switches ON the lamp through its base trigger via the upper diode and the series 1K resistor. 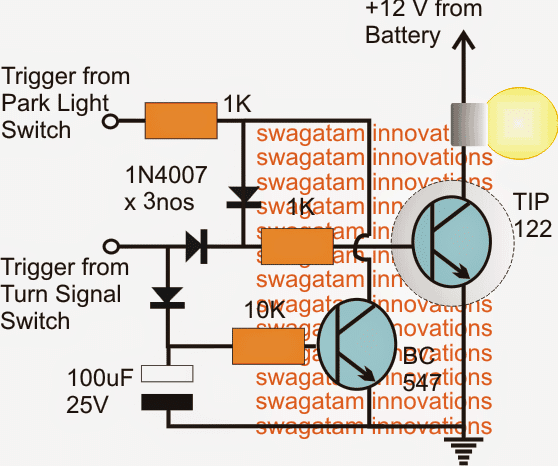 The second requirement demands another lamp which may be positioned as a side marker lamp to respond to the above side indicator or the turn signals but flash with an opposite switching. Also the same lamp is also supposed to light up when the park lights are ON. 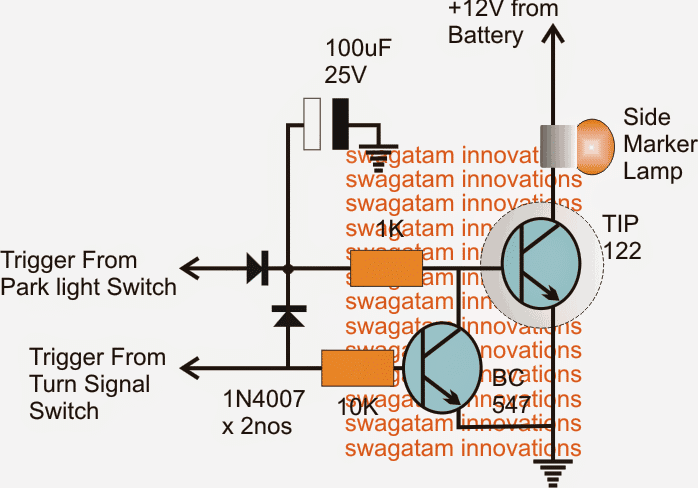 The diagram of the enhanced or the modified side marker lamp as shown above satisfies the conditions by flashing the connected lamp with opposite switching, and also responds to the parking  switch toggling during normal operations.

The TIP122 is responsible for triggering the lamp when the park lights are switch in.

However when the turn signal switch is toggled, irrespective of the park light input the BC547 begins oscillating in response to the turn flash signals causing the TIP122 to also blink the lamp with the corresponding flash rate.

The 100uF capacitor makes sure that the TIP122 is fed with its stored positive feed for sustaining the illumination on the bulb during the flashing actions.

As per the suggestions from Mr. Chris, the first diagram has been slightly modified with the following couple of improvements:

1) The transistor has been upgraded to TIP142.

2) The park-light input trigger has been replaced with +12V trigger from the ignition key so that the lamp works as fog lights and not as parking lights. 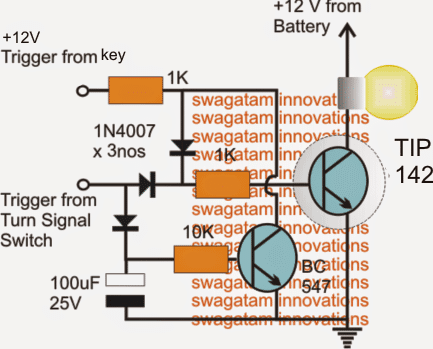 The above circuit could be enhanced further by adding a PWM dimming control feature as shown below. The feature enables dimming of the fog lights when the park lights are turned ON, but ensures that the effect is inhibited as soon as the turn signals are switched ON. 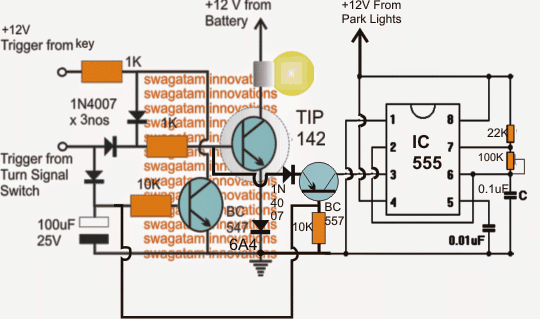