You are here: Home / Car and Motorcycle / LED Lamp Circuit for Motorbike Headlamp

The post explains a simple 21 watt LED lamp circuit module which can be used as a direct replacement for a standard halogen lamp used in motorcycles headlamp.

The proposed "halogen" LED lamp replacement module image can be seen below: 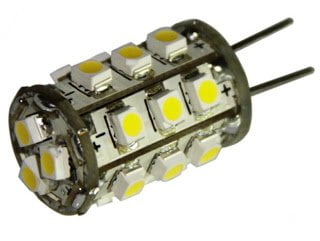 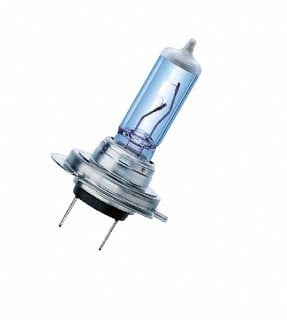 The image at the top shows an example LED lamp replacement for a standard halogen bulb fitting shown below it.

With the easy and extensive availability of LEds, today it's quite possible to make any desired LED lamp module at home for replacing other forms of less efficient lamp options.

Referring to the above image, we can see the LEDs are wired over 7 separate PCBs and then wired together to form one single module.

How to Assemble the Circuit

Each board can be seen with 3 LEDs each, constituting a total of 21 LEDs.

3nos LEDs are selected because the supply 12V available from the vehicle allows only 3nos to be connected in series, and series connection facilitates sharing the same current across the three LEDs.

Now since more than 3nos. of LEds cannot be accommodated in series, 7 such strings are connected in parallel with each other for achieving the desired 21 watts.

The above assembly must be done over a well designed heatsink cored glass epoxy PCB.

The entire configuration may be tightly fixed over an thick hexagonal aluminum cylindrical former or base to form the proposed halogen LED module unit. The aluminum will hep to sink the generated heat from the LEDs.

A Current Limiter is Essential

The above unit will strictly require a current controlled driver circuit which can be understood with the following points:

We once again take the help of the versatile LM338 IC for the required current control function.

Referring to the circuit diagram we ca see it in it's simplest current limiting mode. The LEDs consume around 2.5 amps together which is never allowed to exceed by the IC keeping the unit safe from the issue.

The above design can be upgraded with a Dimming option, as shown below: