This circuit will give call back alerts in the form of blank calls on your cell phone whenever it senses a break in or intrusion inside the particular restricted area where it has been installed for the intended security monitoring.

The cell phone call alert security system circuit which needs to be installed incorporates a cheap cell phone as the modem which is actually used for triggering the warning calls in the owners cell phone.

The above modem cell phone is first attached with its own SIM card as normally done with any cell phone.

For setting up the cell phone, the cover is removed and a couple of wires are neatly connected with the pads which represent the "green" button or the calling button of the phone.

After securing the two connected wires with the green button terminals, the phone is again sealed back to it normal condition.

The external ends of the above wires are then connected to the relay contacts of the control circuit as shown in the figure.

Now every time the green button is activated thrice, a call gets connected to the owners cell phone.

Since the wires from the call button are connected to a relay, it simply means that if the relay contacts gets energized thrice, would result a call being sent from the above cell phone.

How the Control Circuit Works

This circuit was exclusively designed and invented by "Swagatam". 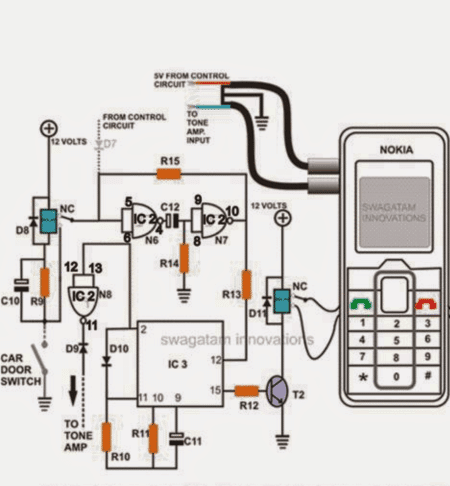