The article discusses a simple 1000 watt LED flood light circuit which can be very easily made by even a layman. The circuit was requested by Mr.Mike, let's know more about the request and the circuit details:

My name is Mike . thank you for your work . would it be possible for you , if you have time ! to make me a design for a 1000 watts electronic ballast for metal halide lamp ? a variable one would be even better .

I have 120 volts here,
Something simple to build if possible
thank you very much and Happy New Year
Mike

A 1000 watt ballast will be difficult for me to design, I tried to find it on the net but I couldn't find any.

By the way you can go for LEDs instead of the proposed type of lamp for better efficiency and light.

And a Happy New year to you, too!

A 1000 watt LED lamp can be designed either by connecting 1000 nos of 1 watt LEDs over a suitably designed PCB or by using 10nos of 100 watt LEDs togrther.

In fact a 100 watt LED module would also consist of 100 nos of 1 watt LEDs wired up internally.

The unit may be designed by incorporating 10 nos of 100 watt LEDs in parallel for generating the intended 1000 watts of  white flood light.

The design  would not involve much complexity,  all the 10 modules can be connected together in parallel with their respective current limiting resistors.

32v is the assumed forward voltage of the 100 watt module.

However there's one drawback with the above design, it requires a 36V supply which is a pretty odd value and it would be difficult to acquire a suitable smps or a transformer with this rating.

Integrating 1000 nos of 1watt LEds might look a very time consuming task but it would provide you the liberty of designing the module for any desired voltage source.

For example if you wanted the module to work with a 12V supply you could wire 3 nos of these LEds in series and connect all these series in parallel. Similarly with a 24V supply 6 nos could be wired up in series and then in parallel.

Preferably, using 1 watt LEDs looks more comfortable as these can be tailored as per user preferences.

The following diagram shows how to wire 1 watt LEDs in series and parallel for implementing a 1000 watt flood light circuit.

For making the wiring easier, a 24V supply is selected here, which allows us to put 6 nos of 1 watt LEDs in series and make appropriate numbers of them in parallel so that the end value reaches close to the 1000 watt mark.

In all 1000/6 =   166 nos of strings can be used here, due to lack of space all the connections couldn't be included in the diagram. The resistor value is again found with the help of the formula:

The assembly should be done over a aluminum based heat absorbing type of PCB. 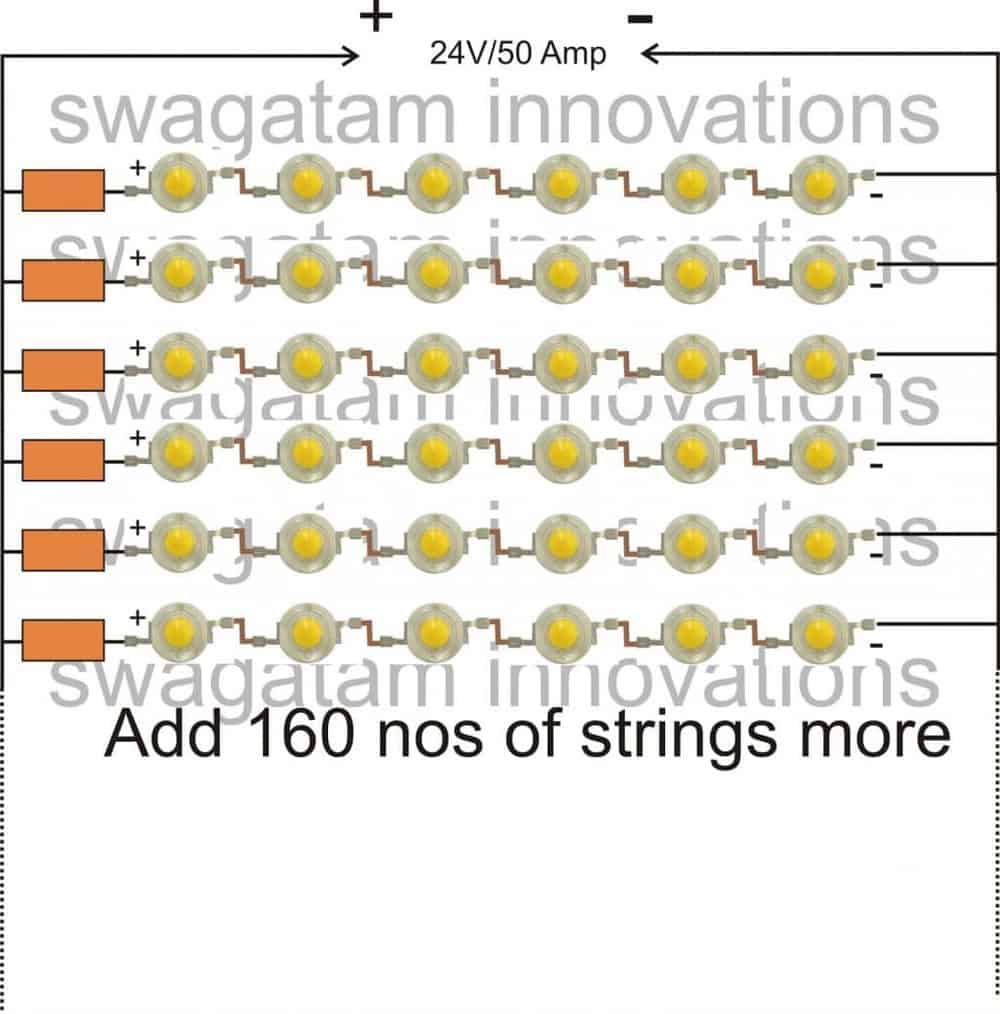