You are here: Home / LED and Light Effect / How to Make a Simple 12 Volt LED Lantern Circuit

In this post we will try to build a simple 12V LED lantern circuit which may be used at night while travelling and outings such as in picnics, trekking, or camping etc.

So far we have discussed white LEDs comprehensively through many of my earlier articles and have learned how efficient these lights are with power consumption.

In this article we will study a very simple configuration for making a LED lamp or a LED lantern.

New electronic enthusiasts often get confused with the wiring intricacies while configuring many LEDs in groups.

Here we’ll see how we can connect as many as 64 LEDs for making the proposed unit.

The circuit diagram details may be understood from the following points:

White LEDs typically have a forward voltage drop of about 3 volts.

When operated at the above voltage level, the device is able to produce lights at optimum levels and the spec also maintains better life expectancy.

The minimum current required at the above voltage level is around 20 mA, which again is an optimal magnitude and is ideally suited for a white LED.

That means for driving a single white LED in the most straightforward way we would require 3 * 0.02 = 0.06 watts, that’s pretty negligible compared to the relative illumination received from it.

The best thing is that as long as the above voltage and current spec is observed, the device continues to consume 0.06 watts irrespective of the number of LEDs connected.

In the present circuit, the maximum voltage available is 12, dividing 12 by 3 = 4, meaning 4 numbers of LEDs can be accommodated at this voltage and yet we are able to limit the power to 0.06 watts.

Therefore though the efficiency may drop a bit, we opt for a configuration which would enable the circuit to work even at lower voltages. We include only two LEDs in the series @ o.06 watts.

Now it’s all about connecting the desired number of strings of two LEDs each in parallel until all the 64 bulbs are included in the circuit.

However connecting in parallel would mean multiplying current. Since we have 32 parallel connections means the total consumption will now become 32 * 0.06 = 1.92 watts, still pretty much reasonable.

Circuit Diagram for the LED Lantern 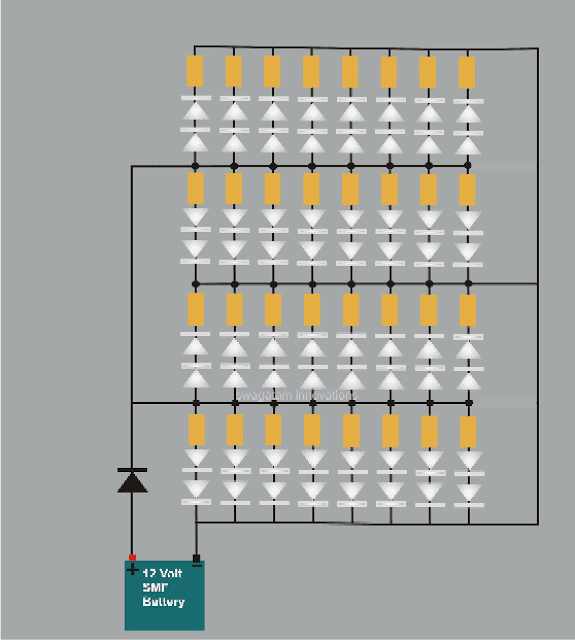 The connection details can be easily traced from the given schematic.

Your simple LED lantern is ready and may be taken anywhere outdoors with you, probably during night time explorations.

All LEDs are = white, 5mm, hi-efficiency