This robotic arm circuit which can be also implemented like a robotic crane, works using 6 servo motors and can be controlled through a microcontroller remote control, using an Arduino based 2.4 GHz communication link.

When you are building something as sophisticated as a robotic arm, it must look modern and must include many advanced features, and not just a mere toy like functions.

The proposed full fledged design is relatively easy to build, yet it is attributed with some advanced maneuvering functions, that could be precisely controlled through wireless or remote controlled commands. The design is even compatible for industrial use, if the motors are suitably upgraded.

The main features of this mechanical crane like robotic arm are:

The few of the features explained above can be viewed and understood with the help of the following GIF simulation:

The following figure gives us the clear picture regarding the various motor positions and the associated gear mechanisms which needs to be  installed for implementing the project: 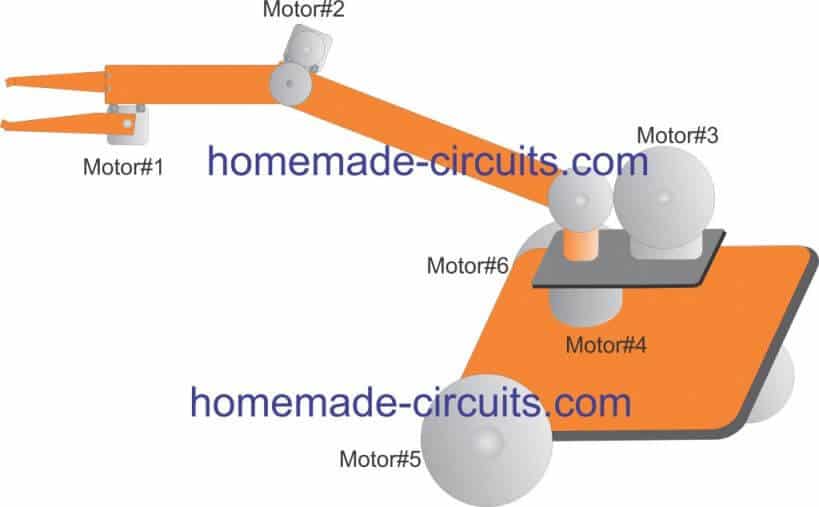 In this design we make sure to keep things as simple as possible so that even a layman is able to understand regarding the involved motor/gear mechanisms. and nothing remains hidden behind complex mechanisms.

The working or the function of each motor can be understood with the help of the following points:

The rear wheel does not have any motor associated with it, it is hinged to move freely on its central axis and follow the front wheel maneuvers.

Since the whole system is designed to work with a remote control, a wireless receiver needs to be configured with the above explained motors. And this may be done using the following Arduino based circuit.

As you can see, there are 6 servo motors attached with the Arduino outputs and each of this is controlled through the remote controlled signals captured by the attached sensor NRF24L01.

The signals is processed by this sensor and fed to the Arduino which delivers the processing to the relevant motor for the intended speed control  operations.

Thsignals are sent from a Transmitter circuit having potentiometers. The adjustemenst on these potentiometer control the speed levels on the corrsponding motors attached with the above explained receiver circuit.

Now let's see how the transmitter circuit looks like: 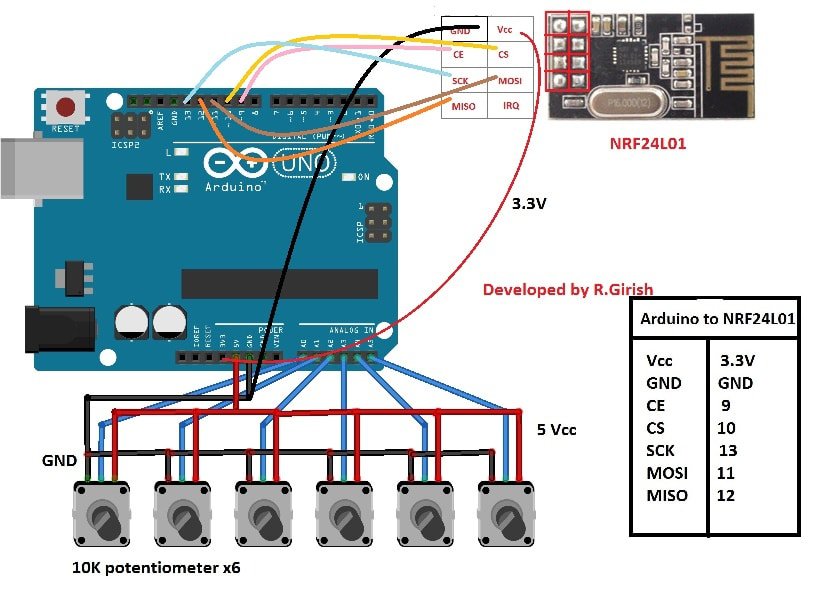 The transmitter design can be seen having 6 potentiometer attached with its Arduino board and also with another 2.4 GHz communication link device.

Each of the pots are programmed for controlling a corresponding motor associated with the receiver circuit. Therefore when the user rotates the shaft of a selected potentiometer of the transmitter, the corresponding motor of the robotic arm starts moving and implementing the actions depending upon its specific position on the system.

You may wonder how do the motors limit their movement across their movable ranges, since the system does not have any limiting arrangement for preventing the motor from overloading once the respective mechanism movements reach their finish points?

Meaning, for example what happens if the motor is not stopped even after the "grip" has held the object tightly?

The easiest solution to this is to add individual current control modules with each of the motors so that in such situations the motor remains switched ON and locked without burning or overloading.

Due to an active current control the motors do not go through an overload, or over-current conditions, and they keep operating within a specified safe range.

Complete Program Code can be found in this article