The article explains a generator/UPS/Battery relay changeover circuit for implementing a customized optimization for a generator, UPS, battery power network, in order to enhance the operational efficiency of the system. The idea was requested by Mr. Sidingilizwe. 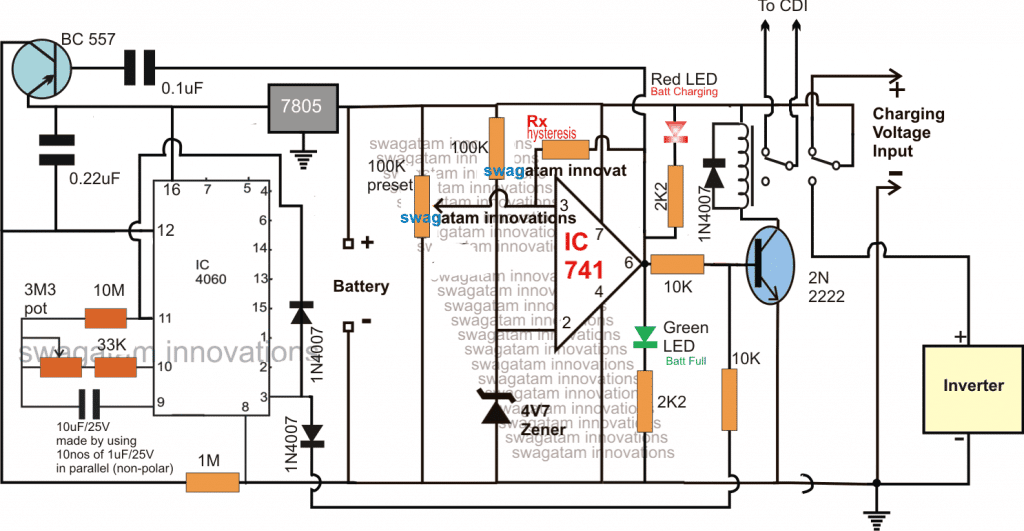 As per the request, the objective of the design is to switch off the generator after 8 hours, and switch it ON when the battery reaches its lower discharge threshold.

To implement this generator/UPS/Battery relay changeover,  I have introduced two options in the design, one is using the IC 4060 timer circuit and the second using the IC 741 opamp comparator circuit.

The opamp comparator is configured in the usual way using the IC 741, its pin#3 is rigged as the battery voltage sensing input while its pin#2 is used as the reference limit, as fixed by the zener diode voltage.

As long as the battery voltage level is below the desired full charge level, the pin#3 potential is lower than the pin#2 reference, resulting in an output pin#6 with a  logic low, this in turn keeps the transistor and the relay switched OFF (N/C contacts at the upper side).

The battery at this position keeps on charging until it has reached the predetermined full charge level, which causes a slightly more voltage to appear at pin#3 compared to the reference level at pin#2 of the opamp IC.

As soon as the above situation is detected, the opamp quickly changes its output stance and switches it to a logic high, turning ON the BC547 along with the relay.

The relay's sets of contacts now flick towards the lower N/O side.

The hysteresis resistor Rx comes into action and makes sure that the opamp stays latched ON in this position until the battery has discharged to some lower unsafe level.

The above action causes the first set of relay contacts to switch OFF the CDI so that the generator is switched OFF, and the second set of the relay contacts enables the battery to get connected with the inverter, allowing the inverter mode operation for powering the load.

On the other side, if suppose the timer circuit which is made around the versatile 4060 IC becomes the first to switch ON (8 hours lapsed) before the opamp, its pin#3 goes high, and it sends a switch ON signal for the transistor relay driver stage.

This implies that in this position the battery may not be fully charged but may be close to the full charge level. However since the inverter needs to be switched ON anyhow even with whatever charge may be available from the battery, the relay is toggled ON by the 4060 output for executing the inverter mode operations.

The battery now begins discharging through the inverter, and after a course of time when it reaches its lower discharge threshold, the opamp hysteresis resistor succumbs to this lower level and releases the opamp latch.

This instantly reverts the opamp output situation and produces a low logic at its pin#6.

This low logic from the opamp does a few things in order to restore the situation the earlier condition:

First it switches OFF the relay switching ON the generator back and initiates the charging of the battery, additionally the low logic also sends a short triggering pulse to a PNP BC557 transistor which resets the 4060 timing and ensures that it makes a fresh start and begins counting from zero.....until 8 hours have elapsed yet again to keep the cycle moving.

The above explained generator/UPS/Battery relay changeover circuit for optimizing the generator, UPS, battery network power efficiency ensures a cyclic turn by turn operation of the stages and makes use of the resources in the most effective and optimal technique producing lower maintenance for the units, and increasing cost saving for the end user.

The following diagram shows an automatic transfer system designed to changeover mains supply from grid to the generator motor, as soon as generator starts generating power. More info can be found in the comment discussion below with Mr. SAA Bokhari