The article explains a car power window controller circuit using a single push button or a couple of push buttons. The idea was requested by Mr. Win.

i have 2 project:
1. auto roll up power window for car
2. auto lock trigger by foot brake for car

can u help me for the circuit n schematic?

auto up power window: i want my car window can roll up or roll down automatically with single click on power windows button switch

​..i ever see the auto roll up module with one relay 8pin, 2 transistor n 4 electrolytic capasitors but it has been broken, 1 resistor n 2 diode. but the series of part has been lost. 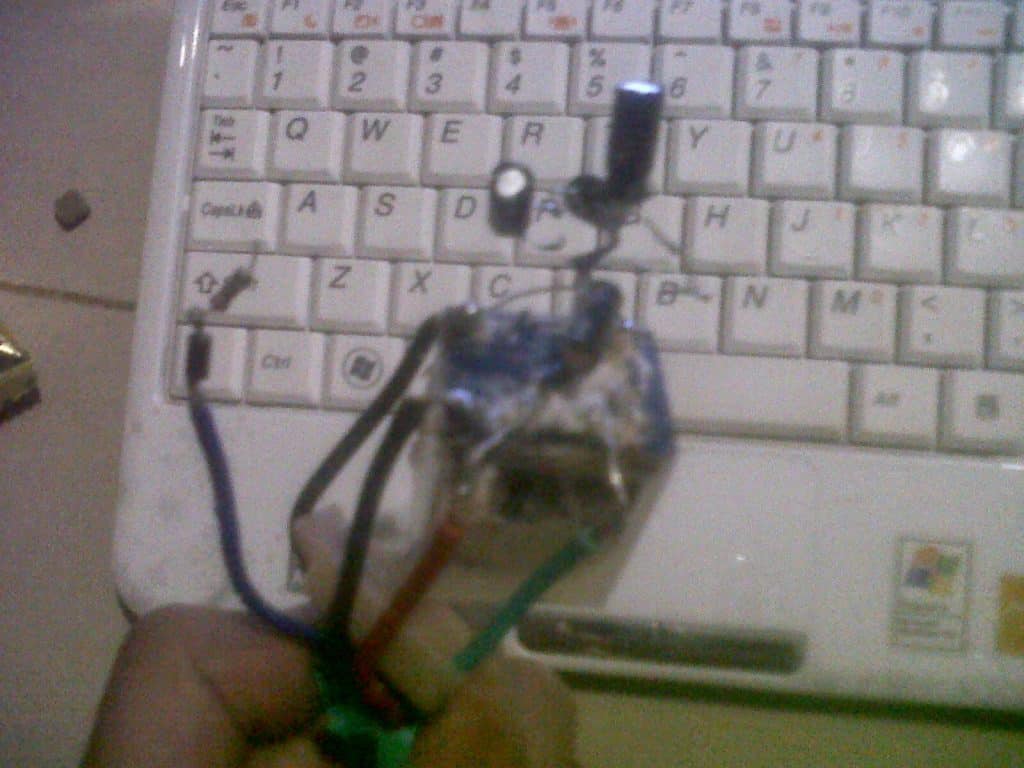 i want to make my car door can locked automatically when all the door closed, key turn ON and i press my foot brake (+trigger). then the door can automatically unlocked when i turn off the key. i hope u understand my explanation...i'm sorry for my english..thank you very much.

The indicated lock/unlock switch toggles the flip flop stage made by engaging three NAND gates from the IC 4093, whose output responds with a permanent high and low alternately with every push of the switch. 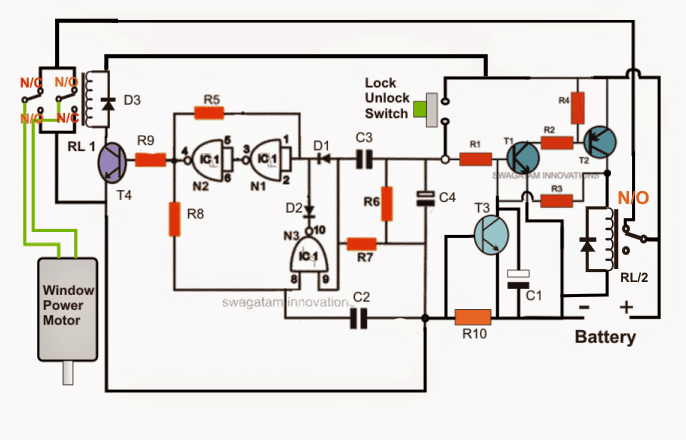 This switch also makes sure that the latch section comprising T1 and T2 gets activated in order to allow the supply voltage to reach the remaining part of the circuit.

The output from the flip flop acquired at N2 pin4 is fed to a relay driver stage for activating the power window motor with a forward or a reverse motion depending upon the position of the window glass.

It must be ensured that while connecting the motor the polarity of the wires are set such that a high at pin4 of N2 actuates the window in the closing mode, and vice versa.

The relay is a heavy duty DPDT relay whose N/C, N/O contact connections with the motor enable the motor to carry out the desired to and fro movement.

Normally, reed switches are employed for detecting the completion of the glass up and down movements in order to avoid the motor from getting loaded and destroyed, however here we have a taken a different and a much advanced approach.

In the proposed car power window controller circuit we have employed a current sensor stage in the form of T3, which detects a mounting current across R10 and switches ON itself when the level crosses a set threshold. When T3 switches ON it breaks the T1/T2 latch disconnecting the supply to the motor.

However if a reed switch is incorporated for the above actions, the reed contacts positioned for detecting the up and the down thresholds of the glass may be wired across C1, and T3 stage may be removed entirely. R10 may be replaced with a wire link (see figure below). 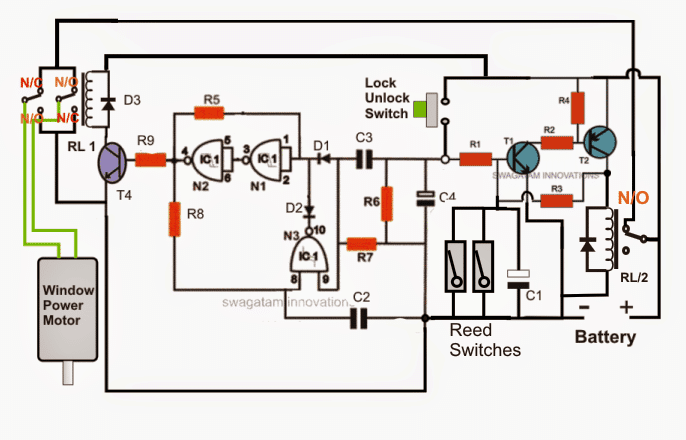 The above design could be much simplified if two separate push buttons are employed for the up/down operations of the window glass. The simplified power window circuit which incorporates just a few number of BJTs can be witnessed below. 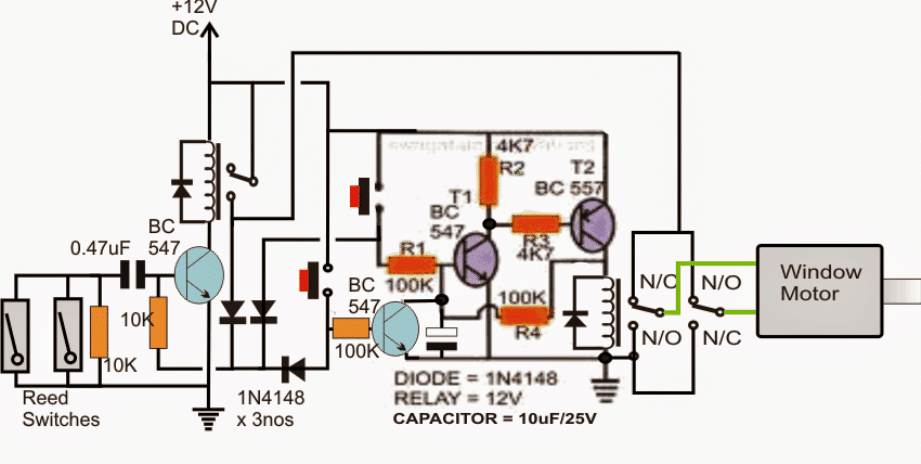 Four of the above circuits will need to be installed on each door of the vehicle for the required power window switching.

In the above sections we discussed the circuit design of an automatic car power window controller, here we'll learn how it may be enhanced with more features.

The main circuit using a single button, posted in the previous article can be witnessed below for reference purpose. 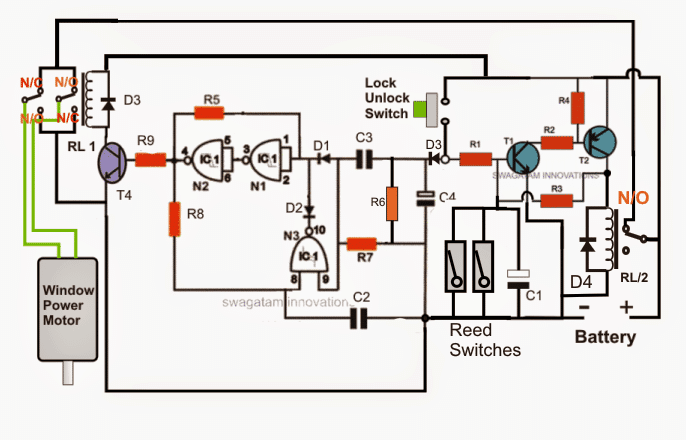 Now, as per the suggestion the window operation needs to be locked when all the doors are closed and the key switched in.

The above step could be implemented by adding the following design in conjunction with the above shown power window controller. 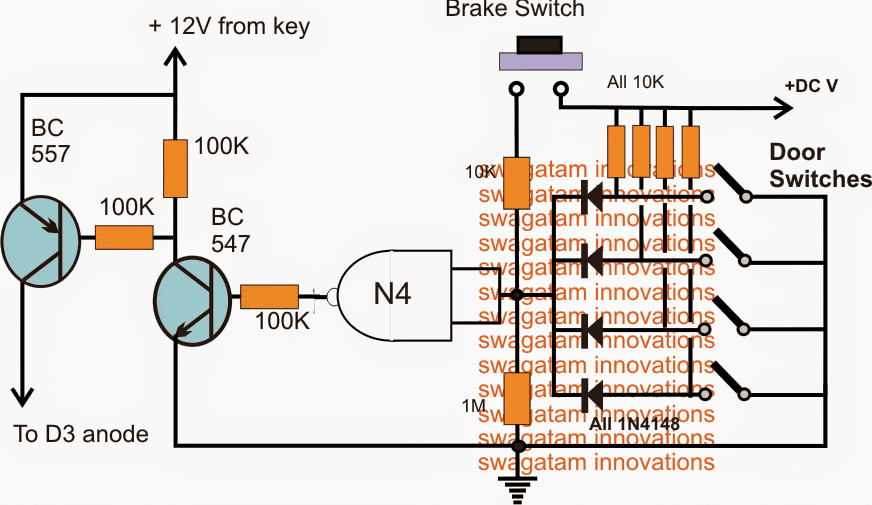 As can be seen, here we have effectively utilized the idle extra gate N4 from the IC 4093 and configured it with a few resistors and BJTs, for executing the proposed brake switch control feature.

The operations may be understood with the help of the following points:

When all the doors are closed, the relevant door switches also close and ground the positive available at the anodes of all the 1N4148 diodes. This immediately forces the input of N4 to go low due to the presence of the 1M resistor.

The low at the input of N4 renders a high at its output which in turn activates the BJTs, positioned as a switches.

However the BJTs would be still inactive as long as the positive from the key switch is not energized.

As soon as the ignition switch is keyed, the BJTs become functional and locks the motor flip flop stage by feeding a positive across D3 cathode. D3 has been introduced specifically here so that the locking potential affects only the flip flop and not the T1/T2 latch stage.

In the above mode the push button is rendered ineffective such that pressing it produces no effect on the window glasses which stays hard locked.

However the above situation gets restored each time the brakes are applied and held activated. Braking activates the brake switch, causing a positive potential at the input of N4 which in turn produces a zero at its output, switching off the BJTs. The positive at D3 cathode now becomes relieved so that the push button is enabled yet again for the intended window up/down operations.