In this post we try to understand the method of dimensioning or calculating inductors in buck boost SMPS circuits in order to ensure an optimal performance from these devices.

In a few of my earlier posts we comprehensively studied regarding how SMPS buck and boost converters work, and we also deduced a few fundamental formulas for evaluating the important parameters like voltage, current and inductance in these converter circuits.

You may want to summarize the details from the following articles, before embarking on the present article which deals with the inductor designing methods.

For calculating inductors in buck boost SMPS circuits, we could derive the following two concluding formulas for a buck converter and for a boost converter respectively:

Here D = Duty Cycle, which is = Transistor ON time / ON + OFF time of each PWM cycle

Vo = Output Voltage from the converter

From the above derived formulas, we can understand that the 3 basic parameters which can be used for dimensioning the output in an SMPS based circuit are:

3) And the Input Voltage level.

This implies that by appropriately adjusting any one of the above parameters it becomes possible to tailor the output voltage from the converter. This adjustment could be implemented manually or automatically through a self adjusting PWM circuit.

Although the above formulas clearly explain how to optimize the output voltage from a buck or boost converter, we still do not know how the inductor can be built for getting an optimal response in these circuits.

You may find many elaborate and researched formulas for settling this issue, however no new hobbyist or any electronic enthusiast would be interested to actually struggle with these complex formulas for the required values, which could actually have more possibility of providing erroneous results due to their complexities.

The better and more effective idea is to "calculate" the inductor value with an experimental set up and through some practical trial and error process.

A simple IC 555 based boost and buck converter designs  are shown below which could be used for determining the best possible inductor value for a particular SMPS boost converter circuit.

The inductor L may be initially made arbitrarily. 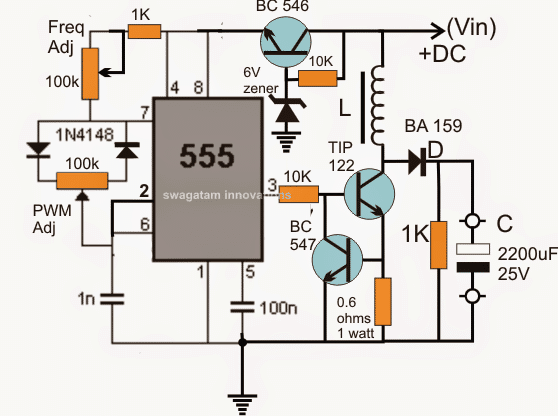 The above set up shows a basic IC 555 PWM circuit, which is equipped with separate potentiometers for enabling an adjustable frequency, and an adjustable PWM output at its pin#3.

Pin#3 can be seen connected to a standard boost converter configuration using the TIP122 transistor the inductor L, the diode BA159 and a capacitor C.

The transistor BC547 is introduced to limit the current across the TIP122 so that during the adjustment process when the pots are being tweaked the TIP122 is never allowed to cross the breakdown point, thus the BC547 safeguards the TIP122 from excessive current and makes the procedure safe and foolproof for the user.

The output voltage or the boost voltage is monitored across C for a maximum optimal response during the entire testing process.

Initially, the PWM pot is set to produce the narrowest possible PWM at pin#3, and the frequency is adjusted to about 20kHz.

A digital multimeter fixed over above 100V DC  range is connected across C with correct polarity.

Next, the PWM pot is gradually adjusted and monitored as long as the voltage across C is rising. The moment the voltage is seen dropping, the adjustment is returned to the position which yielded the highest possible voltage on the pot, and this position is fixed as the optimal point for the selected inductor.

After this, the frequency pot is similarly tweaked for further optimizing the voltage level across C, and set at the most effective frequency point, for the selected inductor.

For acquiring the duty cycle one could possibly check the PWM pot resistance ratio, which would be directly proportional to the mark space ratio of the pin#3 output duty cycle.

The frequency value could be learned through a frequency meter or by using the frequency range across the given DMM if it has the facility, this could be checked at pin#3 of the IC.

Your inductor parameters are now determined and could be used for any boost converter for the best optimal response.

Determining Current for the Inductor

The current spec of the inductor could be increased by simply using many parallel wires while winding it, say for example you could use around 5 nos of 26SWG wires in parallel for empowering the inductor to handle 5amps of current. and so on.

The next diagram shows the process of optimizing and calculating inductors in SMPS, for a buck converter application. 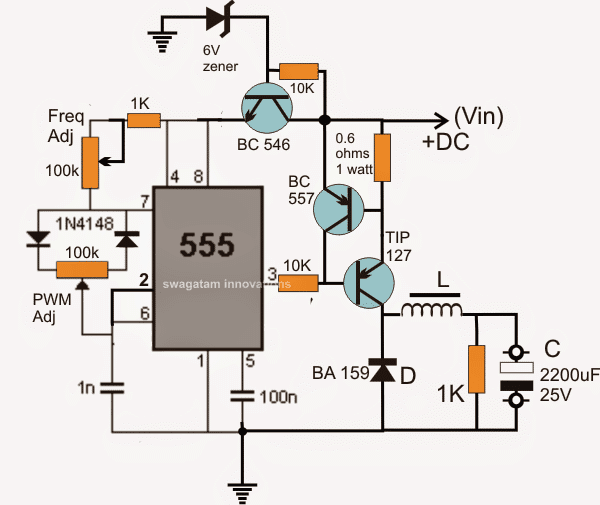 The same process applies for this set up too, as was done with the above explained boost converter design.

As can be seen the output stage is now altered with a buck converter set up, the transistors are now replaced with PNP types and the positions of the inductor, diode changed appropriately.

Thus, by using the above two methods anybody can determine or calculate inductors in buck boost smps circuits without using complex and unfeasible formulas.

We use cookies to ensure that we give you the best experience on our website. If you continue to use this site we will assume that you are happy with it.Ok