A class D amplifier is basically a category of amplifier in which the power devices (mosfets and BJTs) are operated like switches.

The associated output devices in such amplifier circuits either turn fully ON or fully OFF, but never switch between other undefined levels ensuring minimal heat dissipation and maximum efficiency from the devices.

The working of these amplifier circuits may be understood as follows:

An opamp based comparator comes into play whose inputs are fed with two signals, one is the music signal which needs to be amplified while the other is a sample high frequency triangle wave signal.

The opamp is forced to compare and assess the music signal with the sample triangle waves and produce an output which may be assumed to be exactly proportionate and in tandem to the original music signal but in a PWM or a pulse width modulated form.

This music equivalent PWM is further amplified by the adjoining power mosfet or BJT stages in order to reproduce a crystal clear music which may be an exact replica of the fed music and achieved without much heating up of the mosfets.

This allows comparatively lower amps to be consumed than the conventional form of amplifiers coming in other categories such as class A/B/C etc.

One such IC which is designed to perform a class D type of amplification is the IC BD5460 which does not even require an external choke LC filter for the operations. Usually an inductor filter becomes essential with most class D amplifier topologies for minimizing the accompanied harmonics and similar disturbances.

The IC also enjoys other built in features like a standby function, short circuit protection, thermal shutdown and under voltage lockout feature.

A couple of class D amplifier circuits using the IC BD5460 can be witnessed in the following diagrams. The left hand side design is differential input based amplifier, while the right hand side depicts a single ended topology. All the 0.1uF capacitors are configured as input decoupling filters. 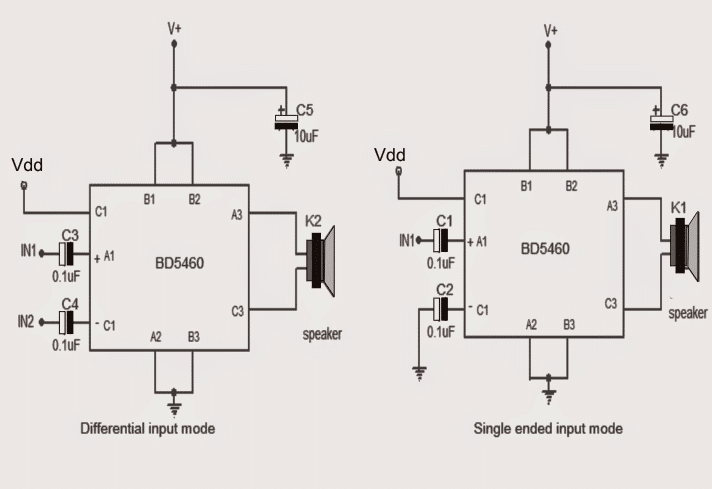 More info about the IC BD BD5460 may be acquired from the following datasheet of the IC.