The post explains an innovative wireless LED brake light circuit which can be attached to a biker's helmet. The LEDs attached with the helmet circuit illuminates in response to the motorcycle braking  generating an enhanced brake light effect from the user's helmet. The idea was requested by Mr. Bugoy.

Good day Sir! How are you? Yes, it was indeed a very interesting project. I am really an advocate of safety and security when it comes to my bike Sir.

I wish you could see it soon. By the way, here are some links of an aftermarket product: 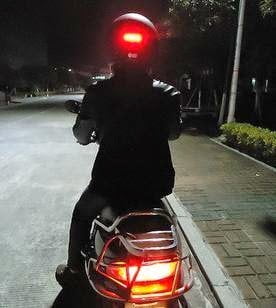 I am thinking of hacking a wireless doorbell or a remote controlled toy car with lights. But I do not know how to do it. So I'm asking for your help Sir if you know of a simple RF transceiver and receiver that could drive LED's.

Thank you so much Sir.

The proposed helmet brake light circuit could be easily implemented by using an inexpensive homemade FM transmitter and a small FM transistor radio.

A small FM transmitter can be seen in the following diagram which becomes the brake light transmitter circuit for the helmet LEDs. 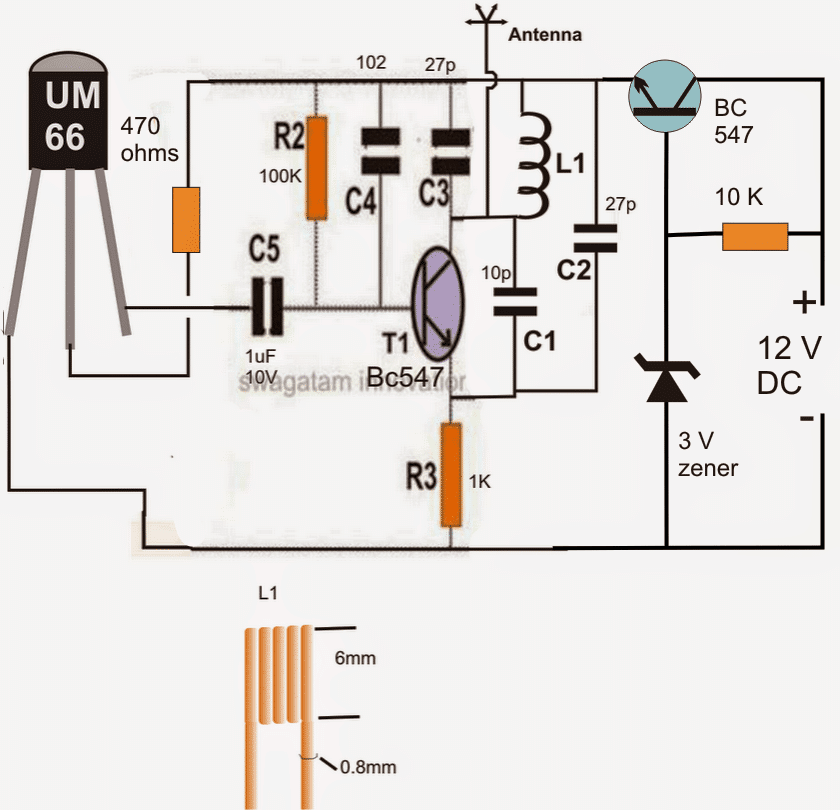 The above design represents a simple FM transmitter circuit which may be integrated with the brake light voltage signal of the motorcycle, or simply across the brake light lamp connection

The circuit generates an FM signal over the standard FM band of 80 to 108 MHz. Thus the transmitted signals become receivable over any standard FM radio placed within a radial distance of 30 meters.The coil would need tweaking for setting the exact point of reception over an FM radio

The indicated 12V lines are required to be connected directly across the brake light lamp of the bike.

The BC547 on the right along with its base zener ensures that the FM transmitter circuit receives the allotted 3 V for the operations.

The UM66 IC is a musical chip which enables the circuit to generate an AF modulated FM transmission ensuring much stronger and robust FM signals compared to a transmitter with no audio modulation stage.

Therefore each time brakes are applied, the transmitter is switched ON and sends a strong audio modulated FM signal for the FM radio positioned inside the helmet.

The FM Radio as the Receiver 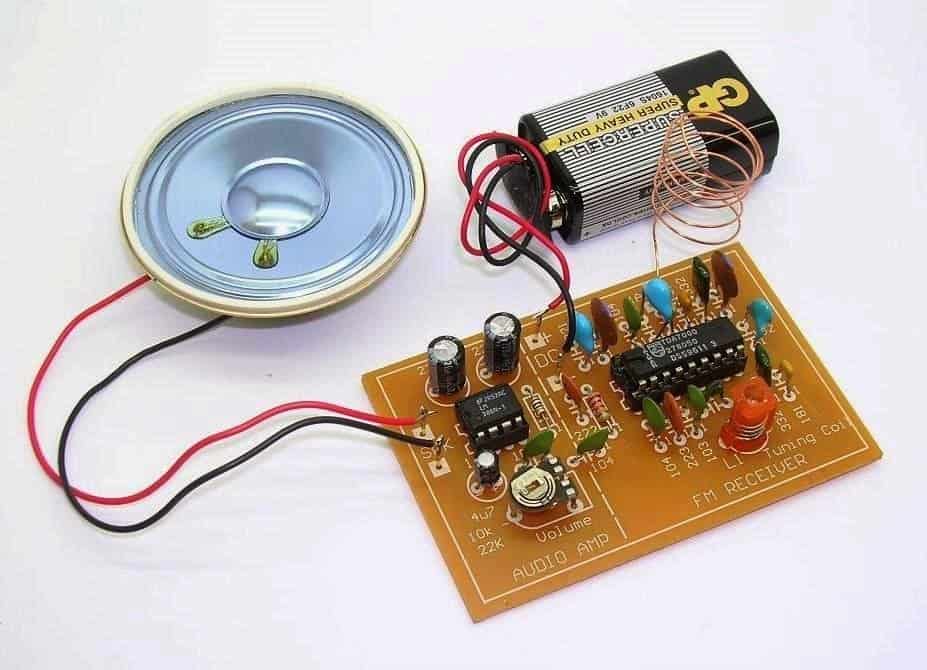 In the image we are able to see a speaker attached with the radio and also a 9 V battery as the supply source.

Both of the above mentioned attachments needs to be removed from the kit and should appear something as given below after the proposed modifications: 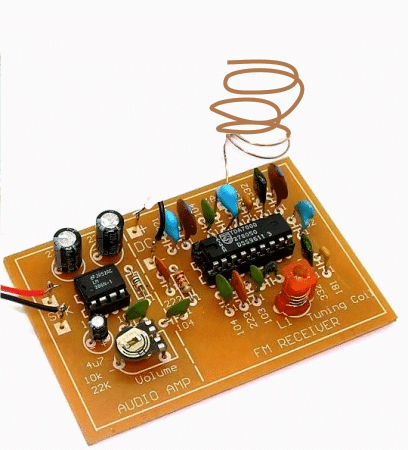 In order to make the above radio compatible with a LEd driver stage and for illuminating a set of LEDs in response to the received FM transmitter signals, we need to make some interesting electrical modifications with the shown FM radio kit.

The following figure shows how a small electrical stage consisting a BJT and inductor may be used for transforming the amplified audio from the radio into a DC which would then illuminate a set of LEds brightly each time the brakes are applied in the motor bike. 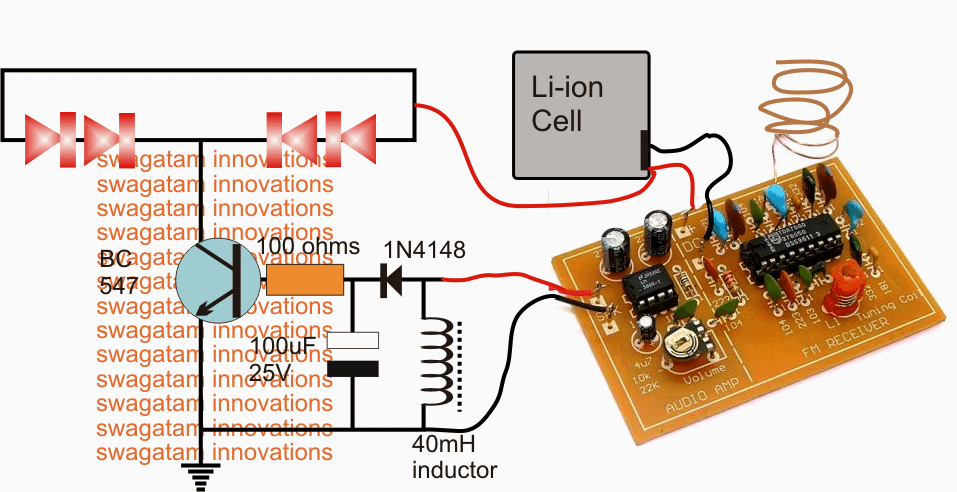 In the above diagram we see the speaker terminals of the FM radio being joined with an inductor and the output across the inductor further connected with a diode, capacitor rectifier stage for converting into a stable DC base drive for the following BC547 LED driver stage.

We can also see the 9 V battery being replaced with a 3.7 V Li-ion cell in order to make the design compact and easily inclosable inside the helmet.

When the radio begins receiving the switched audio, the weak audio frequency across the speaker wires become concentrated and boosted with the help of the connected inductor, this boosted voltage is rectified and filtered by the diode capacitor network so that the BC547 is able to receive a clean DC conversion for driving the set of LEds situated over the helmet body.

Now whenever the brakes are applied the signal from the transmitter is received by the FM radio inside the helmet resulting in the required illumination of the LED strip through the operations as explained in the above section.

How to set up the proposed LED helmet brake light circuit

Before installing the Rx LED module over the helmet, the radio board needs to be set appropriately as per the following explanation:

Switch ON the FM radio with no antenna connected and the station selection on the radio being on any random position.

You may find the LEDs glowing in this situation, now adjust the volume control preset in the amplifier section of the FM board very slowly until you find the LED just stops illuminating.

After the above setting disconnect the speaker output wires from the LED driver stage and let a speaker be connected with these wires. Also connect the antenna wire back in the shown position.

Switch ON the transmitter unit and adjust the red colored frequency coil or it could be a capacitor trimmer in other variants of FM receivers, tune it carefully until a clean and powerful musical audio (UM66 music) is detected in the speaker. Seal the tuning device with glue.

Now remove the speaker and connect the wires back with the LEd driver stage.

Switch ON the transmitter and you'll find the LEDs glowing brightly in response to the received musical transmission from the Tx unit. Switching of the Tx circuit should switch OFF the LEDs as well instantly confirming the perfect working of the system.

Check the response a few more times after which you may proceed with the final installations.