The post discusses a simple wheel rotation identifier or detector circuit which can be used for ensuring a continuous rotating movement of a concerned wheel through an LED, photodiode arrangement. The circuit was requested by nzb109.

I want to generate a trigger circuit to detect that a WHEEL is stationary. The wheel has slots on its periphery.
There is a LED transmitter in front and a photodiode behind the wheel.
As the wheel rotates and the slots come in front of the LED and then pass by, there are pulses recorded by the photodiode.
When the photodiode comes to rest with the slot in front of LED, there is continuous DC signal output.
The difference between motion and stationary wheel appears as a pulse train and continuous DC respectively.
Based on this, how can I design a trigger mechanism that discriminates between pulse train and Continuous Dc and triggers on only due to the continuous signal?

The proposed wheel rotation detector circuit may be understood with the help of the following explanation:

Basically it's an optical encoder circuit which can be can be divided into four stages: the first being the photodiode detector stage consisting of PD, T1, the  second amplifier stage encloses T2 section, the third stage is an inverter stage which inverts the response from the preceding two stages, while the last stage forms the relay driver stage for executing the relay activation.

As long as the wheel rotates, the photodiode PD responds to the alternating lights through the wheel slots and generates correspondingly pulsating voltage across T1 base emitter.

The above response from PD charges and discharges T1 alternately such that T1 conducts with the same sequence as the PD. This ensures that T1 maintains quick switching relative to the wheel rotation which is in turn amplified by T2 to a level which keeps T3 switched ON firmly as long as the wheel rotates.

With T3 switched ON, T4 is inhibited from the required base voltage keeping it switched OFF and the connected relay.

Now in case the wheel ceases to rotate and becomes stationery, the PD is subjected either to a continuous light from the slot or no light at all if no slot coincides with PD.

In either case, the PD stops generating the pulsating voltage required to keep T1 conducting.

With T1 no longer able to conduct results T2 and T3 also in a non-conducting state which instantly prompts T4 to switch ON via R5 and consequently the relay is also switched ON, indicating a permanent halt of the wheel. 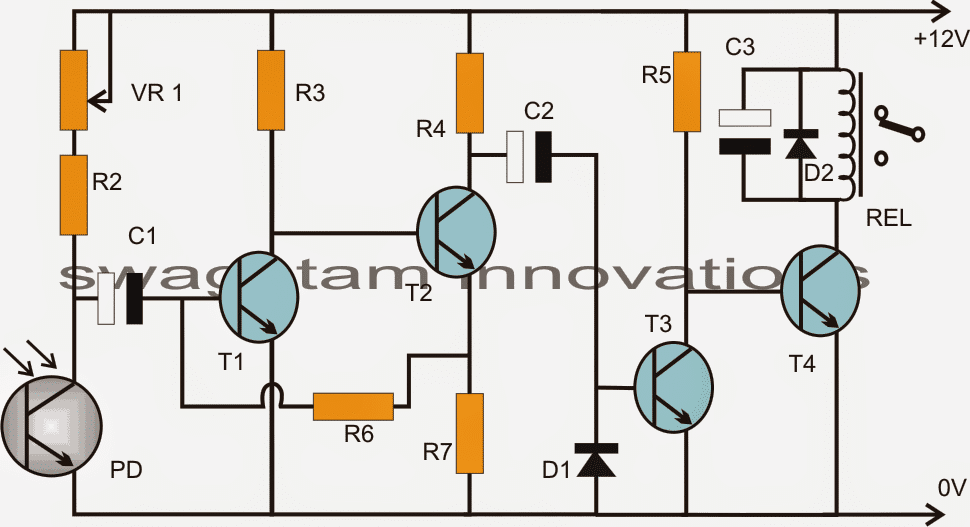 Parts List for the above wheel rotation detector circuit