One of the key elements used in the industry of the electronics is the switches. The various different types of tasks for which the switches are used include providing the power supply to a circuit and selection of a specific element for the circuit which will be used in a given specific application or operation.

Since the early days, the electronic equipment industries are using a wide range of switches varieties. The functions of the switches essentially remain same irrespective of the type of the switch which is being used.

Basics of a Switch

The requirements of switches are of large numbers. In a situation which is ideal the resistance of the switches will be infinite while the contacts will have zero capacitance when the opening of the switch is done.

A switch which is practical and real is unable to achieve this. But, in most of the cases the ideal resistance levels are approximately achieved, especially for the required levels of the voltage and current by the majority of the electronic equipment.

This is false for the electrical systems of high current.

The connectivity and isolation levels provided by the mechanical switches are better in general in comparison to those of the semiconductor switches.

But one of the major disadvantages of the mechanical switches is that their life is limited and their speed is very slow.

Rotary Switch: The process of rotation is used to operate the rotary switch. In case when the requirement is for more than two positions then the rotary switches come in use for these cases. Such cases include the change of the bands in a radio receiver. 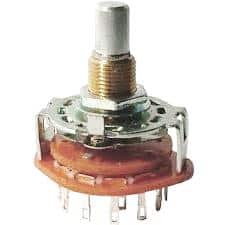 A rotor or a spindle is present in the rotary switches along with a number of terminals which are contacted by the circular contractor which is determined by the spindle’s position. Thus, the selection of a number of contacts or one specific contact can be done in this way.

Toggle Switch: A switch which is actuated manually through the use of rocking mechanism, handle, or a mechanical lever is known as toggle switch. 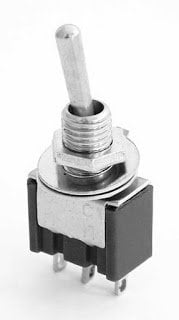 The toggle switch generally consists of two positions. The mechanical mechanism starts functioning after the arm is actuated and holds the arm in any one of the two positions positively.

The designing of the internal mechanics are done in a manner in which the when the arm passes a specific point after the movement starts, and then the arm goes into the next position. Thus, this enables the firm holding of the switch in either of the two positions.

Rocker Switch: The rocker switch is similar to the toggle switch in many areas; especially that it also possesses two positions like the former. 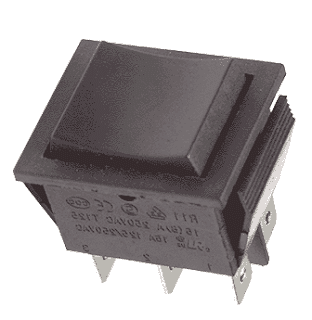 The switching action in the rocker switch is not positive as is in the case of the toggle switch since the former does not follow the mechanism of the latter.

Electronic Switch: The switching of the electrical and electronic circuits can be done through the use of the SCRs, bipolar transistors, and FETs.

The switches are occasionally known as “electronic switches” if the technology used is the lone semiconductor technology.