The resistor’s values which are provided to them fall within a category of standard or preferred resistor values.

The values present within the standard resistor category are in sequence which is logarithmic and are in correspondence to the accuracy of the component.

This enables the values present within the standard resistor category to be placed in respect to the tolerance which is present on the component.

The application of these values present within the standard resistor category can be done for other resistors, components, and capacitors as well.

Since the manufacturing of the component values including values of the resistors cannot be done exactly, a specific tolerance value is associated with each and every resistor.

A list has been made consisting of the standard resistor values and the preferred values in order to ensure and enable the selection of the standard values from the available set of manufacturers.

Thus, this enable the manufacturing of the resistors to be an easy process along with the reduction of the inventory of the manufacturers for the stock holdings by having and following only the range of resistor values which come under the preferred range.

This area has garnered a lot of attraction since there is a requirement of special values of high precision. 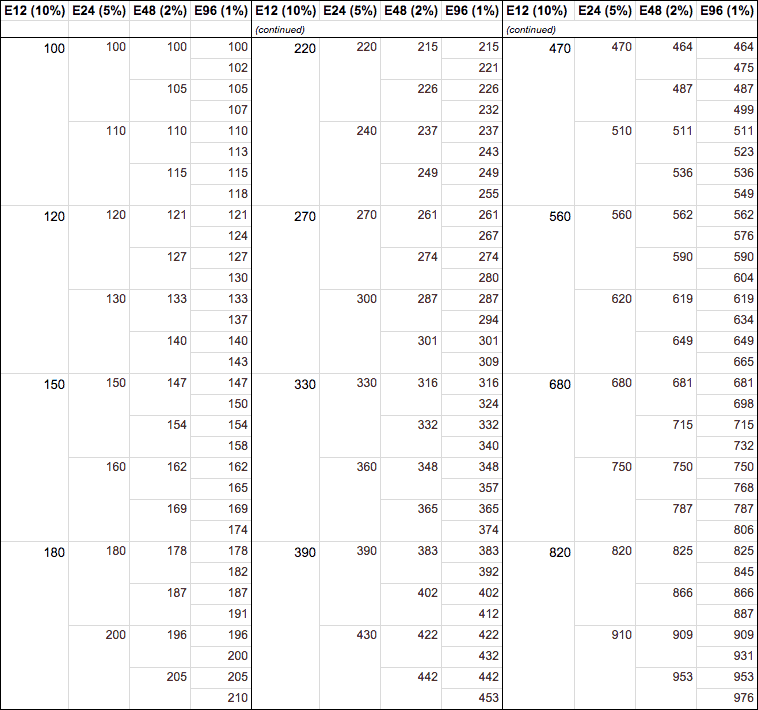 Standard Resistor Values and their E-series

The E-series is used by the resistors in order to space and place the common resistor values in correspondence to their respective tolerance levels.

Thus, one can build a series through the calculation of the values for a wide range in the manner elaborated in the above two examples. This calculation and building of series is done at the interval of every ten years.

The series for the standard values of the resistor which is generated through the process elaborated above is known as the E-series and the values generated are known as the preferred values.

One of the most basic series is the E3 series within the range of E series and consists of three values which are namely 4.7, 1.0, and 2.2.

Since the tolerance associated with the resistors is very wide, the frequency with which this is used for the current day applications is very less. But the basic values of the resistor are used widely in order to reduce their stock holding.

The other series within the range of the E-series is the E6 series whose values are calculated at the interval of every ten years and consists of six values for a tolerance level of ±20%.

The other series within the range of the E-series are the E12 and E24 series whose values are calculated at the interval of every ten years and consists of twelve and twenty-four values for a tolerance level of ±10% and ±5% respectively.

The other series such as the E96 and E48 series within the range of E-series are also available but they are not very common.

Thus, the resistors for which the E24series are commonly used in the current day include the metal oxide film resistors along with the other types.

The standard and preferred resistor ranges of the E-series are used in a wide range and thus have been adopted by various different manufacturing organizations as a standard.

For example, the preferred values of the E series have been adopted by the North American organization, “Electrical Industries Association (EIA)”.

The standard and preferred values of various other components

The system which is used for the resistors for the standard component values adoption works very efficiently.

This can be equally applied for the resistor’s other components. Another way which is applicable consists of the concept of the values enlisted in the standard list to be used and which in turn are determined by the component’s tolerance levels.

The capacitors also use the preferred values of the E series which includes the series such as –E3 which are of the lower order.

On the other hand, the tolerance levels of the ceramic capacitors are very high, higher than that of the electrolytic capacitors and thereby they can use the values of the E24 and E12 series as well.

For example, the component such as the Zener diodes also follow the preferred values of the E series of EIA for breakdown voltages of theirs.

The standard voltage of the Zener diodes conforms to the voltage values of the E24 and E12 series. This is especially true for the level of 5 volts where Zener diode is of the value of 5.1 Volts.