In this article we learn how to design and build a solid state contactor circuit using triacs for operating heavy duty loads like submersible borewell pump motors with high reliability, and without any concerns about wear and tear issue or long term degradation issues of the contactor unit.

What is a Contactor

A contactor is a form of mains operated ON/OFF switch, rated to handle heavy loads at high currents, and high switching spikes in the form arcs across their switching contacts. It is mostly used for switching high wattage or high current inductive loads such as submersible 3 phase pump motors or other similar type of heavy industrial loads which may also include solenoids.

How a Contactor Works

A basic contactor switch will have the following basic elements in its electrical configuration:

In a standard mechanical contactor set up, the start switch which is a push-to-ON switch is used for latching the contactor contacts in a switched ON position so that the connected load is also switched ON, while the Stop switch which is a push-to-off switch is used to break this latch arrangement and to switch OFF the connected load.

When the push to ON switch is pressed by the user, an integrated electromagnetic coil is energized, which pulls a set of spring loaded heavy duty contacts and connects them hard with another set of heavy duty contacts. This joins the two adjoining sets of contacts allowing current to flow from the mains supply source to the load. The load is thus switched ON with this operation.

The electromagnetic coil and the associated sets of contacts form the relay mechanism of the contactor, which gets latched and switch ON each time the push-to-ON switch is pressed, or the START switch is pressed.

The Push-to-OFF switch acts in the opposite manner, when this switch is pressed, the relay latch is forced to break, which in turn releases and opens the contacts into its original switched OFF position. This causes the load to get switched OFF.

Mechanical contactors work quite efficiently through the above explained procedures, however in the long run they become prone to wear and tear due to heavy electrical arcing across their contacts.

These arcing are generally caused due to the masive initial current draw by the load which are mostly inductive by nature such as motors and solenoids.

The repeated arcing cause burning and corrosion on the contact surfaces which eventually become too degraded to work normally for the required switching of the load.

Finding an easy way to solve the wear and tear issue with the mechanical contactors looks daunting and complex, unless the design is entirely replaced with an electronic counterpart that would do everything as per the specs, yet be foolproof against mechanical degradation regardless how frequently these are operated and how big the load wattage may be.

After some thinking I could come up with the following simple solid state contactor circuit using triacs, SCRs and some other electronic components 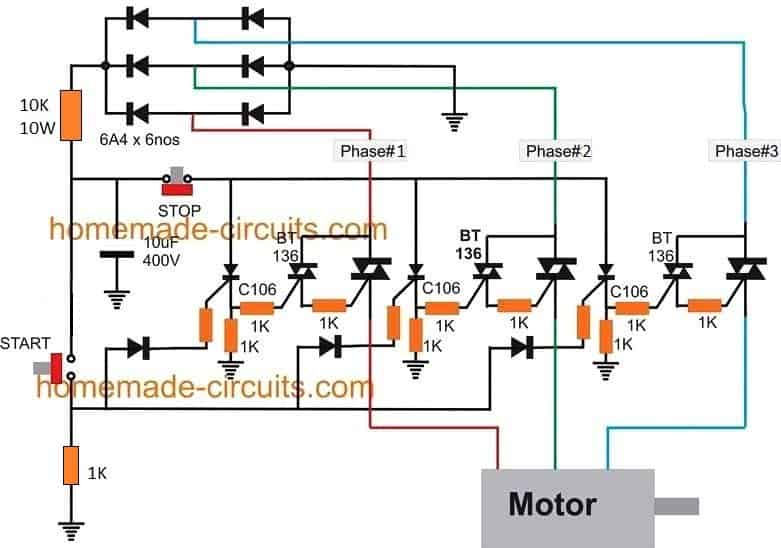 The design looks quite straightforward. We can see 3 high power triacs being used as switches for activating the 3 lines of the 3-phase input.

The gates of these high power control triacs are triggered by 3 attached low power triacs which are used as buffer stages.

Finally, the gates of these buffer triacs are triggered by 3 individual SCRs configured separately for each of these triac networks.

The SCRs in turn are triggered through separate push-to-ON and push-to-OFF switches to switch them ON and OFF respectively, this allows the triacs to be correspondingly triggered ON and OFF in response to the relevant push switch activation.

When the push-to-ON switch is pressed, all the SCRs become instantly latched, and this allows a gate drive to appear across the gates of all the 3 buffer triacs.

These triacs now start conducting, enabling gate triggering of the main power triacs, which finally begin conducting and allow the 3 phase power to reach the load, and the load is switched ON.

To stop this electronic contactor relay circuit, the push to OFF switch (STOP switch) is pressed by the user, which instantly breaks the latching of the SCRs, inhibiting the gate drive for the triacs and switching them OFF, along with the load.

In the above diagram we can see intermediate triac buffer stages being used for relaying the triggering from the SCRs to the mains power triacs.

However a little examination reveals that, may be these buffer triacs  could be eliminated, and the SCR output could be directly configured with the mains triacs.

This would simplify the design even further allowing only the SCRs stages to be used for the START and STOP actions and also reduce the overall cost of the unit.