The post explains a remote controlled automatic transfer switch for enabling an automatic grid to generator changeover action from a specified distance. The idea was requested by Mr. odudu johnson.

The generator rating is going to be between 2.2kva up to 2.5kva, and much be an automatic embedded systems generator on its own not the manual gen set...

Single phase generator and the Mains will be single phase too.. Ie 220 volts 50hz..... The system will be designed to select between two available source of power Giving preference or priority to one out of the two sources of power. In this case, the selection is between public supply Mains and generator.

The ATS should monitor the Mains supply and check for complete failure or power outage upon which it changes the load over to the generator supply, sends command to the generator wirelessly to start ie ON..

And when the public supply is restored the ATS detects this sends an off command to the generator wirelessly the return the load back to the Mains............

The communication between the ATS and Mains isn't wireless just that of the gen set.....

I'll be expecting something positive

The entire design of the proposed remote controlled wireless generator automatic transfer switch circuit can be divided into the following explained 4 stages:

The following circuit controls the mains ATS by detecting a possible grid low voltage condition or a complete failure. The opamp is configured as a comparator, wherein its non-inverting pin is used as the detector input via an adjustable 10k preset.

As long as the grid mains voltage is within the normal range the output of the opamp remains high, keeping the two relay driver stages switched ON.

The  first relay changeover stage comprises a DPDT relay and it forms the main ATS grid to generator changeover controller relay, while the other smaller relay becomes responsible for controlling the transmitter circuit.

While the grid mains is active, both the relays stay activated, the DPDT supplies the grid AC to the home appliances through the relevant N/O contacts. The SPDT relay keeps the transmitter (Tx) circuit switched ON so that a continuous wireless signal is sent in the atmosphere for the Rx (receiver) circuit, which is supposed to be attached with generator system somewhere in the vicinity. 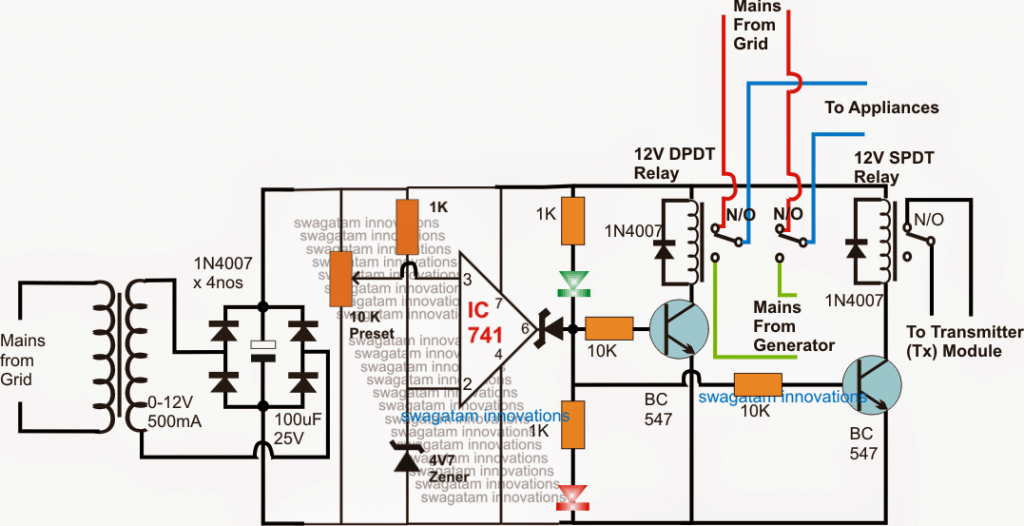 The following diagram depicts the transmitter (Tx). The N/O contact connections from the above shown SPDT relay is connected across any one of the 4 switches (as desired)..... that is any one among the shown SW1---SW4 switches 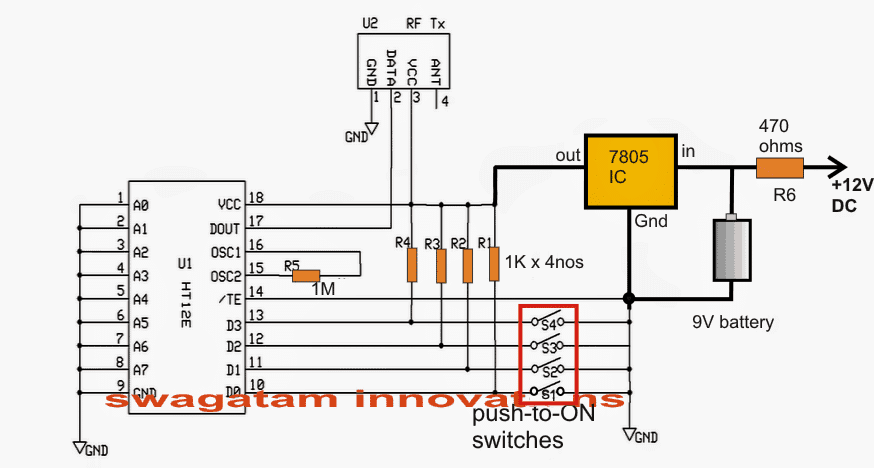 The next diagram which may be witnessed below, is the receiver (Rx) circuit, which is positioned near the generator system and is configured to respond to the above shown Tx signals and keep the generator either ON or OFF, depending upon the grid mains availability.

When the grid mains is present, one of the selected switches (SW1----SW4) from the above Tx circuit is toggled ON by the SPDT relay in the first opamp circuit.

The wireless remote signals from the Tx unit is detected by the below shown Rx circuit, resulting in a low logic signal across one of the 4 outputs (A-----D) corresponding to the particular selected input of the Tx circuit (SW1----SW4), as selected. 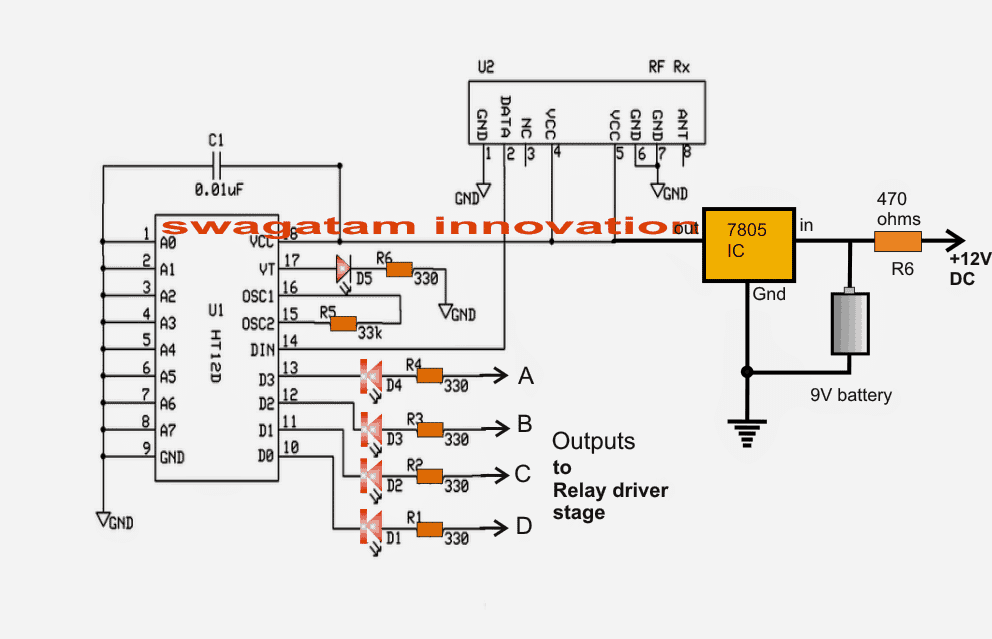 The following shown relay driver stage is used to respond to the above discussed Rx circuit output's low logic and activate a connected relay.

As long as the selected output of the receiver (Rx) circuit remains ON, the BC557 from the below given relay driver stage also stays ON, keeping the associated relay activated, this is supposed to happen while the grid mains is available.

As indicated below, the relay stays switched ON across its N/O contacts which in turns keeps the generator switched OFF.

However in an event of possible low grid voltage or a complete failure, the opamps controlled ATS relays reverts to the N/C contacts, toggling the load towards the generator side of the changeover, and simultaneously the transmitter circuit is switched OFF.

With no signal available for the Rx unit, the corresponding relay driver stage and the relay are also switched OFF. The relay contacts now shift to its N/C contact enabling the generator with a switch ON power.

The generator is thus switched ON and the power to the appliances is supplied and changed over by the generator mains AC, via the ATS DPDT relay contacts from the opamp circuit. 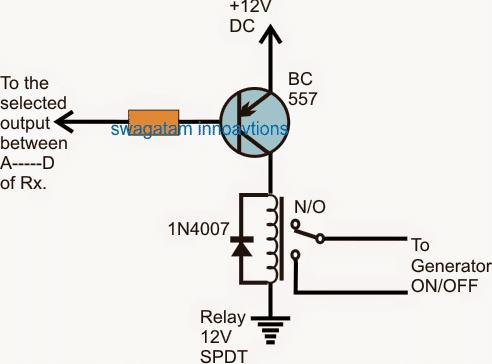