The post explains how to make and replace existing bulb type brake lights in vehicles with high efficiency LED lamps.The idea was requested by Mr. Awan.

I would like to build a brake lamp project using 1 watt high power leds, consisting of 12-15 leds.
the leds would light on dim parking lights and would light full on brake pedal press. kindly provide me a circuit..
kind regards,
Awan

LEDs are a lot economical than ordinary incandescent lamps or even the modern halogen lamps in terms of their efficiency, luminance and life.

Therefore even in automotive field we can now witness a rapid transition from the old filament type bulbs to the modern high bright LED lamps.

These are normally being implemented as brake lights and head lights in most modern and the new generation vehicles.

We all know that basically today's all modern high watt LEDs require two crucial parameters in order to function correctly and safely, namely a current controlled supply and thermal or heat controlled assembly.

The first criterion can be implemented by using any modern sophisticated  linear IC such as a LM338, I have discussed it elaborately in one of my previous articles high watt LED current limiter circuit.

For the second condition one can simply use a special aluminum base PCB mounted on a heatsink for assembling the 1 watt LEDs. 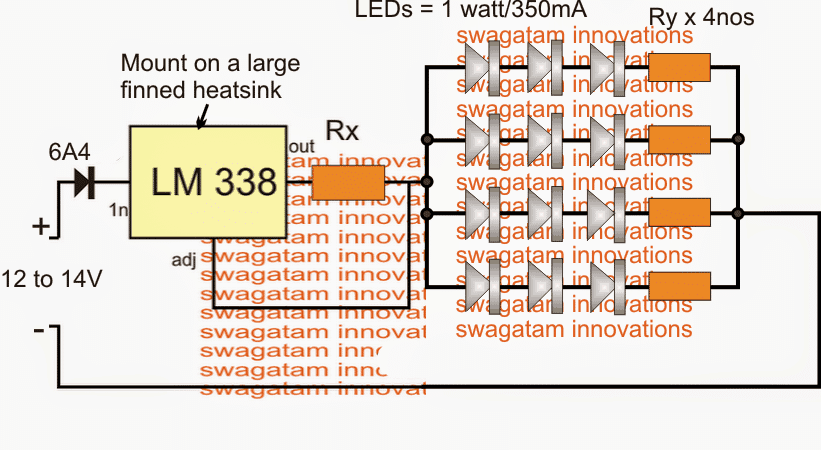 The circuit for the LED brake light may be witnessed above, and it looks pretty straightforward.

The LM338 is configured as a current limiter, where Rx determines the maximum allowable amps to the connected LEDs. It may be calculated using the following formula:

When LeDs are connected in series there effective current consumption
is always equal to the rating of the one individual LED. Therefore in
the diagram each string would consume 350mA since this is the rating of
each 1 watt LED.

Substituting the above parameter in the formula we have:

The resistors Ry which can be seen connected in series with the LEDs are actually optional, these may be included only for assisting the IC and providing proper balance across the LED strings.

It may be calculated using the following formula:

For reducing full loading of the LEDs, we can take the current at 300mA instead of the specified 350mA

It seems we missed an important inclusion in the above diagram, it's the dimmed LED feature during the normal course of the vehicle and while the brakes are not applied.

The following diagram suggests how simply this may be implemented using a parallel connected resistor Rz, with Rx. 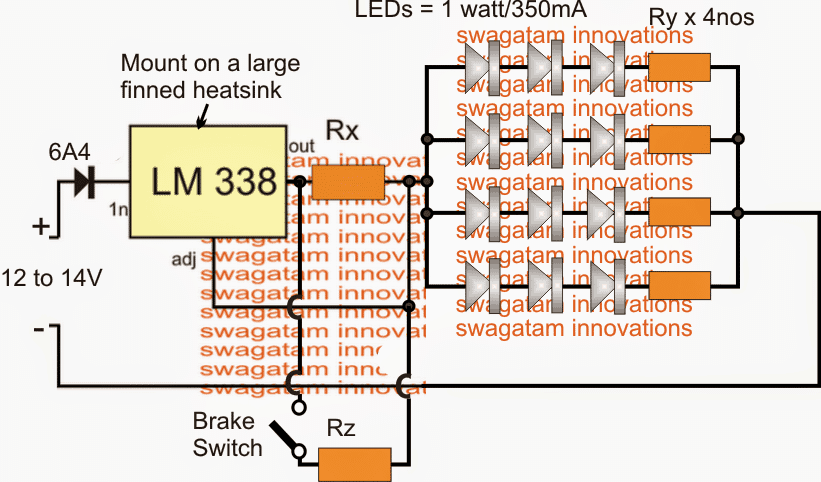 Here the values of the Rx and Rz may be identical but twice that of the above calculated value that is 1.25 x 2 = 2.5 Ohms. This would allow a 50% dimming of the tail lights while the brakes are in the released position.

If one desires to obtain further dimming of the LEDs Rx may be increased to 3 ohms or 3.5 Ohms, this would also mean lowering the Rz value proportionately such that the parallel value of the two resistors constitutes 1.25 Ohms.