You are here: Home / Electronics Tutorial / How to Make a Zero Crossing Detector Circuit

Making a zero crossing detector circuit is actually very easy and it could be effectively applied for protecting sensitive electronic equipment against mains switch ON surges.

What is a zero crossing detector?

We all know that our mains AC phase is made up of alternating sinusoidal voltage phases as shown below: 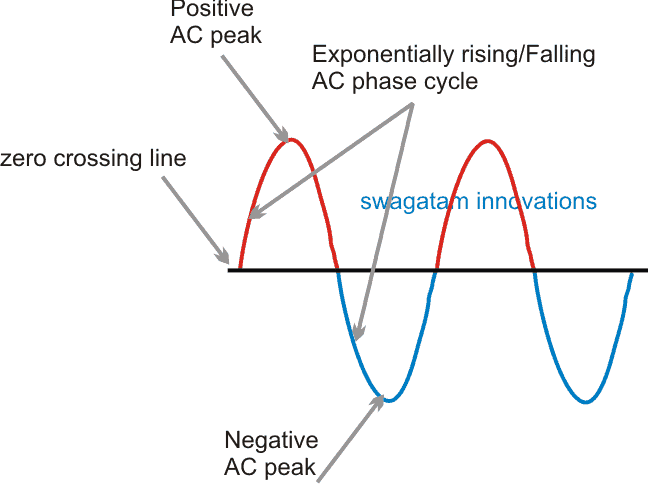 In this alternating AC, the current can be seen alternating across the central zero line and across the top positive and bottom negative peak levels,  through a particular phase angle.

This phase angle can be seen rising and declining exponentially, meaning it is doing so in a gradually rising and gradually falling manner.

Whenever we switch ON an appliance or an electronic device to the mains, it is subjected to a sudden entry of the AC phase, and if this entry point happens to be at the peak of the phase angle could imply maximum current being forced to the device at the switch ON point.

Although, most devices will be ready for this and might be equipped with protection stages using resistors, or NTC or MOV, it is never recommended to subject them to such sudden unpredictable situations.

To tackle such an issue, a zero crossing detector stage is used which ensures that whenever a gadget is switched ON with mains power, the zero crossing circuit waits until the AC phase cycle reaches the zero line, and at this point it switches ON the mains power to the gadget.

How to Design a Zero Crossing Detector

Designing a zero crossing detector is not difficult. We can make it using an opamp, as shown below, however using a opamp for a simple concept as this looks to be an overkill, so we'll also discuss how to implement the same using an ordinary transistor based design: 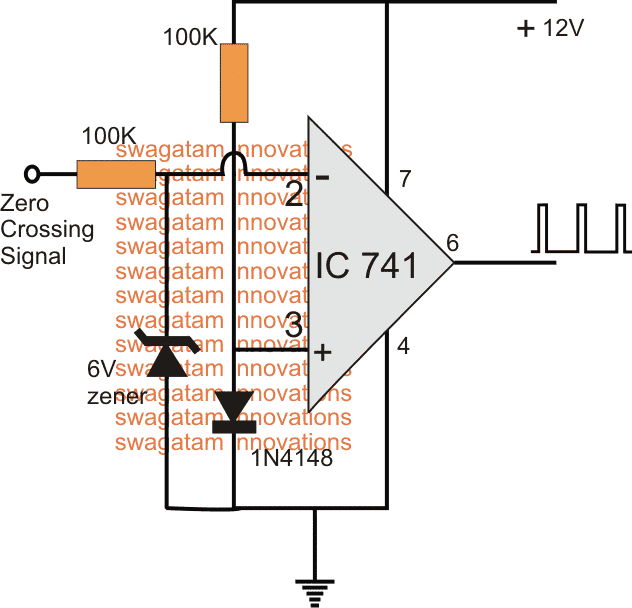 The figure above show s simple 741 opamp based zero crossing detector circuit which can be used for all applications requiring a zero crossing based execution.

As can be seen, the 741 is configure as a comparator, wherein its non-inverting pin is connected with ground through a 1N4148 diode, which causes a 0.6V drop potential at this input pin.

The other input pin#2 which is the inverting pin of ther iC is used for the zero crossing detection, and is applied with the preferred AC signal.

Thus the output during these points becomes 12v high level, and this sequence goes on triggering each time the phase crosses the zero line of its phase cycle.

The resultant waveform can be seen at the output of the IC which clearly expresses and confirms the zero crossing detection of the IC.

Although the above discussed opamp zero crossing detector is very efficient, the same can be implemented using an ordinary opto coupler BJT with reasonably good accuracy. 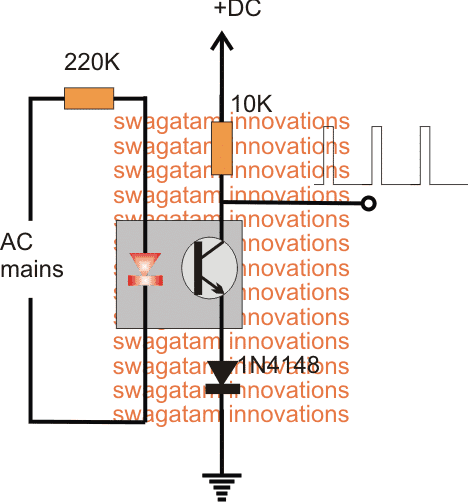 Referring to the image above, the BJT in the form of a phototransistor associated inside an opto coupler can be effectively configured as a simplest zero crossing detector circuit.

The AC mains is fed to the LED of the opamp via a high value resistor. During its phase cycles as long as the mains voltage is above 2V, the phototransistor stays in the conducting mode and the output response is held at near zero volts, however during times when the phase reaches the zero line of its travel, the LED inside the opto shuts off causing the transistor to also shut off, this response instantly causes a high logic to appear at the indicated output point of the configuration.

A practical example circuit using a zero crossing detection can be witnessed below, here the triac is never allowed to be switched at any other phase point except the zero crossing point, whenever power is switched ON.

This makes sure that the circuit is always kept away from the switch ON current surge, and from its relevant dangers. 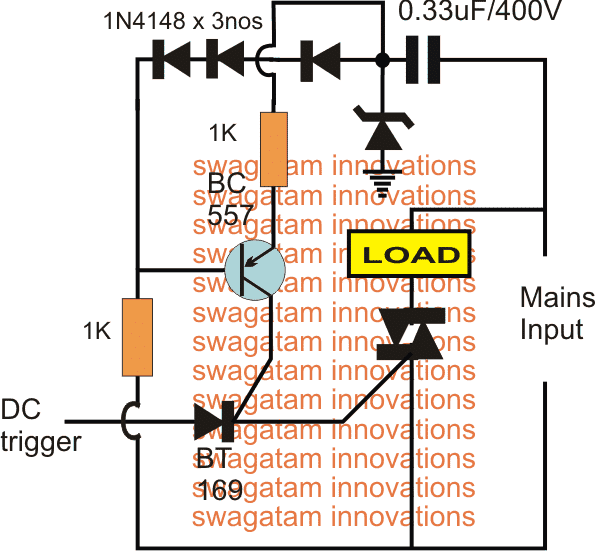 In the concept above, a triac is fired through a small signal SCR controlled by a PNP BJT. This PNP BJT is configured to execute a zero crossing sensing for the intended safe switching of the triac and the associated load.

Anytime when power is switched ON, the SCR gets its anode supply from the existing DC trigger source, however its gate voltage is switched ON only at the moment when the input transits through its first zero crossing point.

Once the SCR is triggered at the safe zero crossing point, it fires the triac and the connected load, and in turn becomes latched ensuring a continual gate current for the triac.

This kind of switching at the zero crossing points every time power is switched ON ensures a consistent safe switch-ON for the load eliminating all possible dangers that is normally associated with mains sudden power switch ON.

Another great application of a zero crossing detector circuit is for eliminating noise in triac switching circuits. Let's take the example of an electronic light dimmer circuit, we normally find such circuits emitting a lot of RF noise into the atmosphere and also into mains grid causing unnecessary dumping of harmonics.

This happens due to the rapid intersection of the triac conduction across the positive/negative cycles via the zero crossing line...especially around the zero crossing transition where the triac is subjected into a undefined voltage zone causing it to produce rapid current transients which in turn are emitted as RF noise.

A zero crossing detector if added to triac based circuits, eliminates this phenomenon by allowing the triac to fire only when the AC cycle has crossed the zero line perfectly, which ensures a clean switching of the triac, thererby eliminating the RF transients.

Previous: Connecting MPPT with Solar Inverter
Next: How to Add a Dimmer Facility to a LED Bulb