The post discusses a a simple yet versatile foolproof laser security alarm circuit which can be used for securing any concerned premise with extreme accuracy. The idea was requested by GPS.

The proposed foolproof laser security circuit can be witnessed in the following diagram: 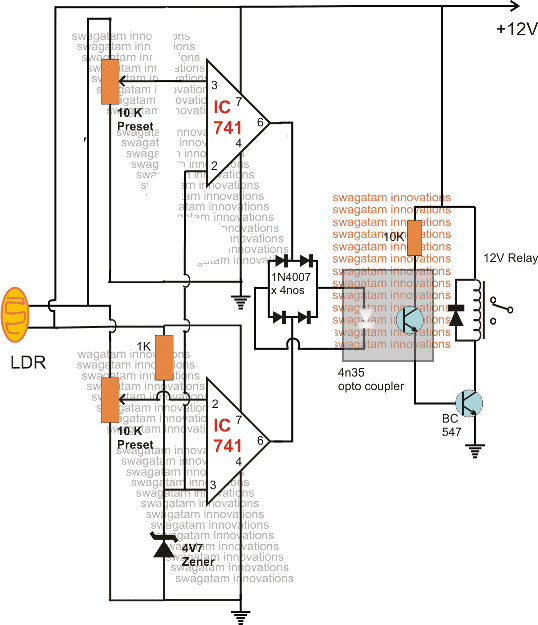 In the earlier article we saw a rather simple Laser controlled burglar alarm circuit where the alarm is sounded whenever the laser beam incident on the LDR is interrupted.

However as requested above, this could be possibly overridden and disabled by focusing a dummy laser beam at the sensor by a smart intruder.

In order to counter this the design shown above can be effectively utilized which makes sure that only a specific amount of light controls and keeps the alarm deactivated, and varying this spec even minutely triggers the alarm.

Basically the design is implemented through a window comparator stage made by using a couple opamp comparator circuits.

This keeps the circuit at a sharp edge, wherein any alteration in the laser beam causes the alarm to get activated.

Since both the opamp can have a zero logic only in the perfectly normal laser condition, the attached optocoupler stays inactive under this condition.

However in case the light is disturbed either on the higher or on the lower side, the relevant opamp output goes high, enabling the opto to activate the relay driver stage.

This instantly actuates the relay and the connected alarm across its contacts.

How to Set up the above discussed fool proof laser security alarm circuit.

It is very easy.

That's all, the circuit is now set and ready for sensing any form of tampering of the laser beam and to activate the alarm.