The post discusses an interesting energy saving lighting circuit design which switches ON only when it is logically required thus helps to save electricity, and also increases the working life of the whole system.

Thanks for response, the details which you asked are as such ,
1. solar charger circuit to charge a lead acid battery.
2. my project demands that in a room if someone is present then LED's should be always on.
3. if the natural light is good then it should dim its light .
4. if nobody is there in room then after a delay of 1-2 min it should switch off.
5. provision to shut down during holidays.
All i need is my department room during college hour or after if needed should be lighted with using solar energy directly or through batteries.

I am really counting on you , I DON'T HAVE ANYONE WHO CAN TEACH ME THIS AND I GOOGLED IT LOT BUT ITS NOT WORKING OUT.

AS per the request the following energy saving intelligent light circuit consists of three separate stages, viz: the PIR sensor stage, the LED module stage, and the PWM light controller stage consisting of a couple of IC555.

Let's understand the the different stages with the following points:

The upper stage consisting of the PIR sensor module, and the associated circuit forms a standard passive infrared sensor stage.

In the presence of humans in the specified range, the sensor detects it and it's internal circuitry converts it to a potential difference so that it's fed to the base of the first NPN transistor.

The above trigger, activate both the transistors, which in turn switch ON the LEDs connected at the collector of the TIP127.

The above stage makes sure that the lights are  ON only during the presence of humans in the vicinity, and are switched OFF when there's nobody around. C5 ensures the lights don't switch OFF immediately in the absence of humans rather after a few seconds of delay.

Next, we see two IC 555 stages which are configured as  standard astable and PWM generator stages. C1 determines the frequency of the PWM, while the R1 resistor may be used for optimizing the correct response from the circuit.

The PWM output is fed to the base of TIP127 transistor. This means, when the PWM pulses consist wider pulses, keeps the transistor switched OFF for greater periods of time, and vice versa.

It implies, with wider PWMs, the LED would be weaker with their intensity, and vice versa.

We all know that the PWM output from a 555 IC (as configured in the right hand side section) depends on the voltage level applied at its control pin#5.

A potential divider stage made with the help of R16, R17 and VR2 accomplishes the above function such that the IC responds to the external ambient light conditions, and generates the required optimized PWMs for implementing the LED dimming functions.

R16 is actually an LDR which must receive ONLY the light from external source entering the room.
When the external light is bright, the LDR offers lower resistance thereby increasing the potential at pin#5 of the IC, This prompts the IC to generate wider PWMs making the LEDs grow dimmer.

During low ambient light levsl, the LDR offers higher resistance initiating the opposite results, that is, now the LEDs start getting brighter proportionately.

The 220K pot may be adjusted to get the best possible response from the IC 555 stage, as per individual preferences. 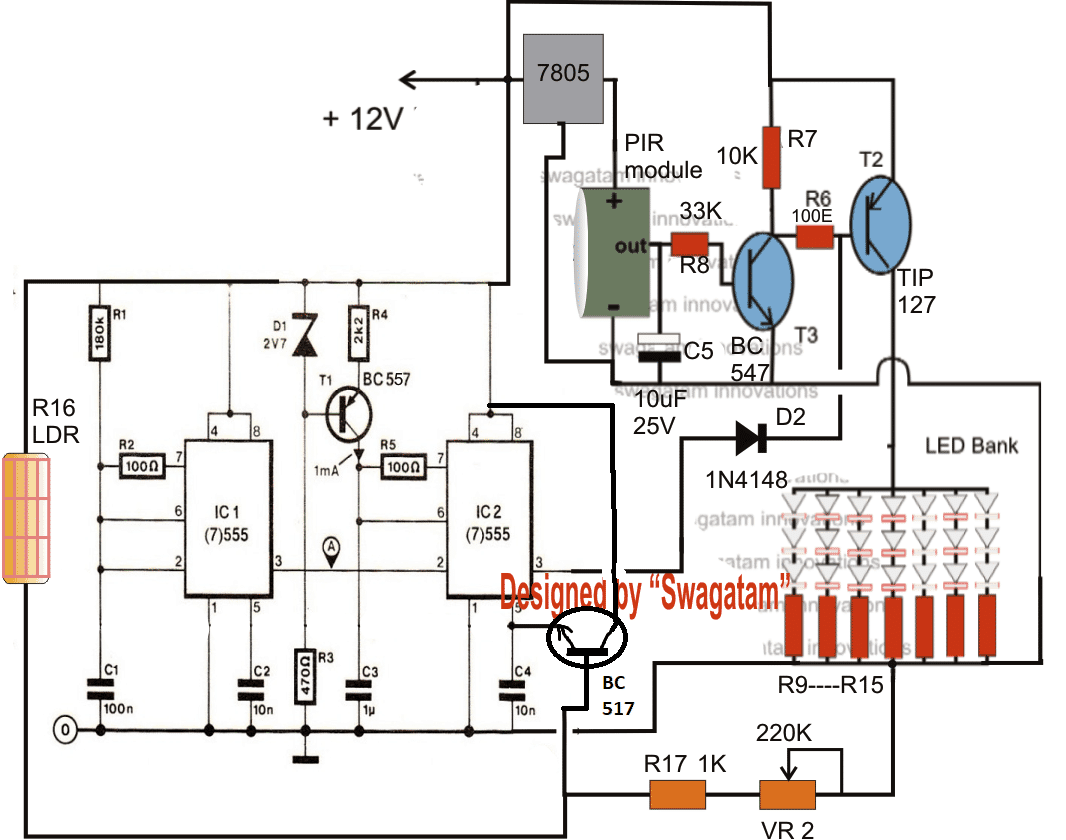