The post explains a simple electronic door circuit for pets which can be used as an electronic dog door for allowing only your specific pet dog to use the entrance, while keeping it locked for "strangers". The idea was requested by Mr. Dave Monette.

The preferred door specification for this project should be such that it does not require a complex opening or closing operations. For example a sideways opening door or a sliding type of door could be quite complex to configure. Instead, a vertically hanging type of door (hinged at the upper edge) would be much easier to tackle and equip with the required electronics.

Mechanical Details of the Door 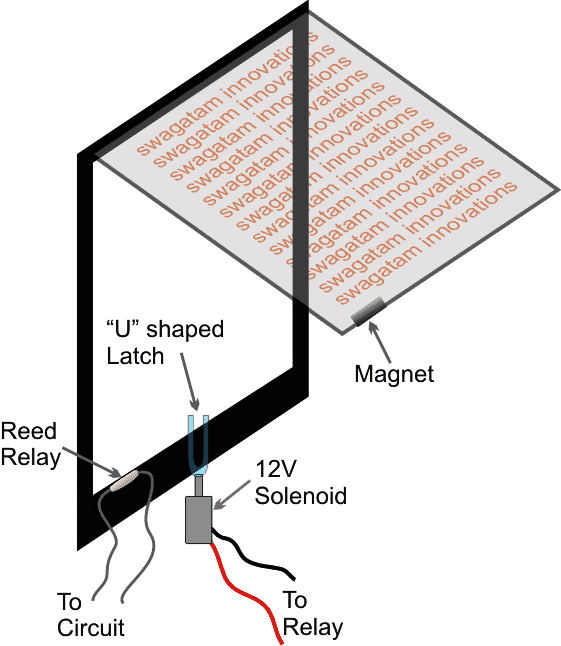 The door mechanism and the associated electrical can be understood with the following points:

The frame of the door consists of a central "U" shaped latch driven by a 12V solenoid unit.

The movable door lower edge is embedded with a permanent magnet such that while it's in its normal closed condition, the magnet aligns itself exactly face to face with the reed relay.

This concludes the door mechanism electrical, now let's see how this needs to be configured with an electronic circuit for the desired automatic "pet" triggered operation. 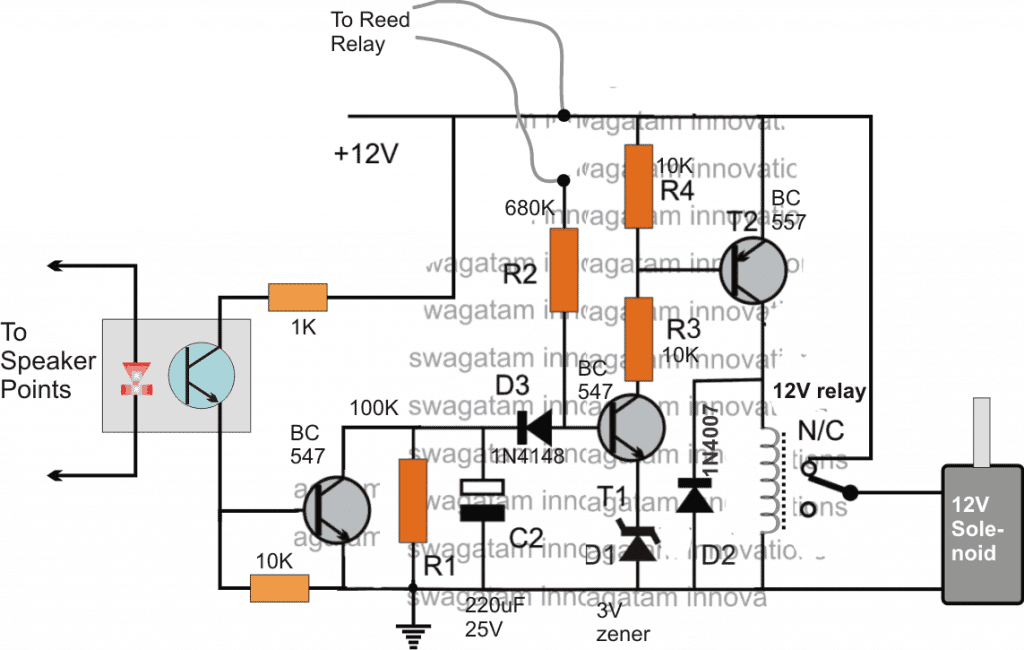 The circuit shown above is a simple delay ON timer circuit using T1, T2, R2, C2 as the main components.

Normally the delay timer is supposed to operate the relay after some delay as soon as the circuit is powered with an input supply of 12V.

However in the shown circuit design, the specified delay operation is controlled by two parameters, 1) the reed switch, and the opto coupler IC (with the attached BC547 transistor).

How the Delay Timer is Activated with Reed Switch

The reed switch and the corresponding magnet on the door ensure that the delay timer is activated only while the door is perfectly at the center of the door frame and is stable. In this position the delay timer is enabled by the reed conduction, which eventually operates the relay after the set delay has elapsed.

When the relay operates, it connects with its N/O contacts switching OFF power to the solenoid and causing the "U" latch to be pushed up for the intended locking of the dog door.

The second device which influences the delay timer and door locking is the opto coupler feed.

Here we have selected a homemade FM radio, and an FM transmitter for the required signalling because the other forms of professional RF Tx/Rx modules could have high range which might be not be suitable for the proposed application, because we want the receiver circuit to activate only when the pet is much closer to the door and not while it's some 50 or 100 meters away, that would be simply spoil the purpose of the design.

How to Install the Transmitter Circuit

The transmitter circuit is supposed to be fixed on the neck-belt of the dog, and the FM radio needs to be installed with the door mechanism.

Once this is done, whenever the dog comes near the door, the FM radio detects the FM signal from the FM transmitter installed on the dog's neck and converts it into an amplified audio signal.

This audio signal activates the opto coupler which instantly disables the T1/T2 conduction, causing the relay to deactivate ( at N/C). With the relay contacts at the N/C, the door solenoid is immediately powered, and activated.

The solenoid now pulls the "U" latch down, releasing the door free to be opened by the dog through a quick head push.

Once the dog has entered and crossed the door, the door "tries" to restore its position at the center and after a few oscillations settles at its normal central position aligning its magnet with the reed switch.

The reed switch now enables the delay timer to begin counting, but this operation may be still inhibited unless the dog is completely out of the range, causing the opto coupler to shut off.

When both the criteria are fulfilled, the delay timer begins its counting and after the set delay "shoots" the "U" latch upwards locking the electronic door for all other creatures except the dog itself.

The receiver could be any standard small FM radio, tuned to receive the pulses from the above transmitter, and wired with the dog door assembly as explained in the above discussion.

The explained electronic door circuit is actually too simple to fabricate and install, and could be done even by new hobbyists who are well versed with the basics of the trade.