Solar energy is abundantly available across the globe and it's free to use. It's all about laying down a solar energy collector or simply a solar PV panel, and harness the available resource.

In this blog and in many other sites you might have come across various efficient solar battery charger circuits. However these circuits generally speak about using the solar panel for  acquiring electrical energy.

While functioning, the involved regulators/chargers stabilize the solar voltage such that the output voltage becomes suitable for the connected battery which is normally a 12V lead acid battery.

Since normally a solar panel is designed for generating voltages in excess of 12V, that is around 20 to 30 volts, the process of stabilization completely neglects the excess voltage which is either shunted to ground or cancelled out through electronic circuitry.

In the present article we learn a simple method of converting excess solar energy to heat even while charging a battery, and operating household appliances safely together.

The circuit functioning may be understood with the following points:

In the given solar water heater with battery charger controller circuit diagram, let's assume at peak sunshine the attached solar panel is capable of generating around 24V.

In the diagram we can see a couple of opamps positioned in between the solar input and the battery charging outlet.

The opamp at the left is basically set for allowing the specified charging voltage to its right hand side stages.

RV1 is therefore adjusted such that the output of the opamp becomes high in case the input voltage exceeds the 14.4V mark.

The opamp at the right is designated as the over charge cut off stage which is responsible for monitoring the charging voltage of the battery, and cut it off when the upper threshold is reached.

This happens when the non inverting input of U1B senses the higher threshold and shuts off the positive bias to the mosfet which in turn cuts off power to the connected battery.

However the load which is essentially an inverter stays operative, as now it starts deriving the power from the charged battery.

In the course, if the voltage drops even by a few voltages, U1B reverts its output to logic high and the battery once again begins getting charged while simultaneously allowing the connected appliances to remain operative via the common panel voltage.

Meanwhile as discussed in the previous lines, U1A monitors the panel voltage and just like U1B when it instantaneously senses the panel voltage exceeding the 14.4 mark, it switches its output to logic high so that the connected transistors are instantly switched ON.

A DC heater coil can be seen attached across the collector and positive of the transistor.

When the transistor conducts, the coil is shunted across the direct panel voltage, and therefore it instantly begins getting hot.

The low resistance of the coil pulls lot of current from the panel which forces the voltage to drop below the set 14.4 level for U1A.

The moment this tends to happen, U1A reverts the situation and cuts off the supply to the transistors and the process rapidly fluctuates, such that the voltage fed to the battery stays within the 14.4V mark and in the process the heater coil manages to stay active so that its heat becomes applicable for any preferred purpose. 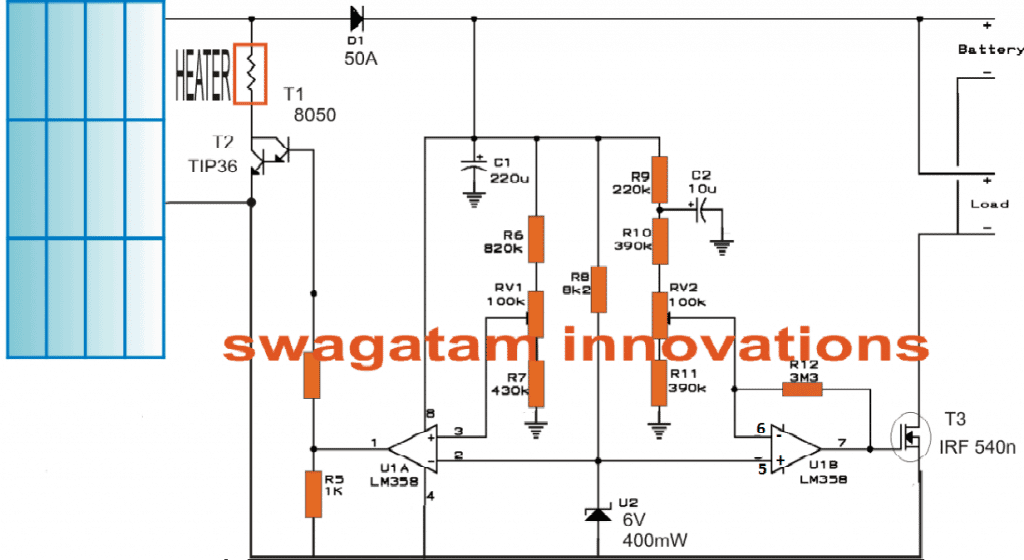